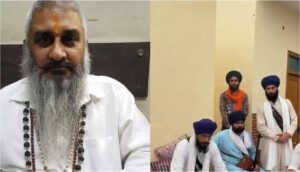 On November 4, Shiv Sena (Taksali) leader, Sudhir Suri, was shot outside Gopal Mandir on Majithia Road in Amritsar while protesting against a purported act of sacrilege. The main accused has been identified as one , Sandeep Singh, who owns a garment shop near the Temple. Sandeep Singh pumped five bullets into Sudhir Suri with his licensed .32 Bore pistol and is now in police custody.

The police is defining Sandeep Singh as “self-radicalised” and the murder as a “hate crime” against Sudhir Suri. The prima-facie assessment given by the police, however, is not convincing. A wide spread belief is that Sandeep Singh carried out the murder under influence of the separatist movement in Punjab being perpetrated by Amritpal Singh. There is also a video doing the rounds of Singh and his son meeting Amritpal Singh in Amritsar on October, 29. The family of Sudhir Suri has demanded addition of the name of Amritpal Singh in the FIR for the crime.

Amritpal Singh has recently and quite suddenly emerged from Dubai as the mouthpiece of the separatist Khalistan ideology. He has gained legitimacy by taking over as head of the “Waris Punjab De” organisation formed by the late actor and activist Deep Sidhu, who died in a car accident in February 2022.

Incidentally, the ‘Waris Punjab De’ credentials of Amritpal Singh are also under a scanner. Mandeep Sidhu, the brother of Deep Sidhu, has gone on record to state that his family has not invited Amritpal Singh to take over the organisation and that Deep Sidhu did not even know Amritpal directly. Hence, the very platform on which Amritpal is standing is dubious, which points towards a well conceived conspiracy to bring him into the limelight.

The murder of Sudhir Suri raises many questions about the rising radicalism in the state of Punjab. The first boost came in the form of the election of Simranjit Mann as a member of Parliament from the Sangrur constituency in the by-election held due to vacation of the seat by Punjab chief minister Bhagwant Mann. Simranjit Singh Mann and his pro-separatist party, the Shiromani Akali Dal (SAD) (Amritsar), had elicited no support in Punjab since the last almost three decades. It won more due to frustration of the people against the Aam Aadmi Party whose ineptitude as a ruling dispensation had become very apparent within a few months  of it forming the government.

It seems that Pakistan, always on the lookout to create trouble in the sensitive border state of Punjab, has identified an opportunity in the winning of the election by Simranjit Mann and installation of a weak government in the state. It has put into motion a plan to raise the spectre of separatism in the state yet again.

It is no surprise therefore that suddenly, out of the blue, Amritpal Singh came to Punjab from Dubai and positioned himself as a clone of the late Jarnail Singh Bhindranwale. There is a striking physical resemblance between the two which is being exploited to the hilt. His attire of a white Chola with a navy blue turban and carrying a sword instead of the Kirpan helps build the image.

The similarity between Amritpal and Bhindranwale, however, ends here. Bhindranwale was a preacher of the Sikh faith and head of the Damdami Taksal. Amritpal, on the other hand is hardly  tenth class pass; he was clean shaven till sometime back and involved in his small family business in Dubai.

Amritpal has admitted to being quite unread, he does not quote from the holy Gurbani in his discourses probably because he has no knowledge of the scriptures. He simply speaks of sacrifices of the Gurus and then gets into the political domain of bashing the Indian Government and seeking from the Sikh youth a similar sacrifice to attain “freedom.” It is quite apparent that he has been specially trained for the role that he is playing, the signature of Pakistan’s Inter Services Intelligence (ISI) is quite visible in this training.

Amritpal loses no opportunity to identify Bhindranwale as his “inspiration.”  The ceremony of his appointment as head of the “Waris Punjab De” was, for obvious reasons, held at Village Rode, the birthplace of Bhindranwale. It witnessed slogans of “Khalistan Zindabad” while he thundered for “Panthic Azaadi” (Community freedom). 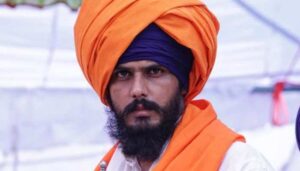 In his public discourse, he has been guided to follow the methodology adopted by Bhindranwale. While Bhindranwale spoke against pornography, substance abuse and consumerism, Amritpal is focussing on drug proliferation, sacrilege cases, rising pop culture, environment degradation and other such social issues. He is calling upon the Sikhs to become “Amritdhari” (pure) and fight against what he projects as State repression. He has a well honed methodology of seamlessly shifting focus from social issues to the more diabolic separatist and divisive rhetoric that is his main purpose.

The hidden agenda becomes very apparent in his advocacy of the means to challenge this so-called repression. He urges the Sikhs to become “Shastradhari” (armed). The next step is telling them to get ready to offer their “sacrifice” in the name of the Guru and the Panth.  His rhetoric blatantly encourages an armed uprising in Punjab.

Amritpal is eliciting a lot of media attention, especially in social media.  There are many who quickly respond to any kind of criticism that is directed against him. Others are building a huge image of him as a messiah of the Sikhs. He enjoys more than normal presence on FaceBook, Twitter etc. This kind of media attention is feasible only through the interventions of professionals and a huge financial investment. So the question arises – who is providing this support? Here too, ISI comes to mind  considering the proficiency that it has in such propagandist activities.

The more mature and experienced political leadership of Punjab is well aware of the danger that is being posed by the emerging volatile situation. Leaders of all parties, barring  SAD (Amritsar), are urging the Aam Aadmi Party led government to put a check on the activities of Amritpal Singh. The Union Ministry of Home Affairs has also advised the Punjab government to keep a watch on his activities. “People of Punjab want to know who are the forces behind this youth who had recently moved to Punjab from Dubai…it is the duty and responsibility of the state government to confront such forces and their activities,” stated Captain Amarinder Singh, senior leader of the Bharatiya Janata Party (BJP) in what is a very clear reference to Pakistan. Congress MP Ravneet Singh Bittu and MS Bitta among many other prominent leaders have also spoken against the kind of hate that he and his coterie are trying to spread in Punjab.

Amritpal has been quick in isolating himself from Sandeep Singh and the murder of Sudhir Suri; however, the murder has clearly established his capacity to move the youth on the direction of extremism. One family has been ruined, many more will follow if timely action is not taken, the cascading effect of a series of such incidents can be well imagined.

It is incumbent upon the state Government to listen to the words of caution that many are speaking with regard to the advent of Amritpal Singh. It is necessary to identify his source of funding and refute the message that he is trying to spread. He cannot be allowed to hide behind a veil of social service and carry out secessionist activities. The Union Government should not hesitate from intervening if it feels that the situation is getting out of hand. Balance has to be maintained in Punjab under all circumstances.

(Jaibans Singh is a security expert, social worker and author)