You are here: Home / Areas of Study / Social & Cultural Studies / Anti-Sikh Riots 1984: Justice has been delayed and subverted
Share

On 31 October 1984, the then Prime Minister of India, Smt. Indira Gandhi was assassinated at her residence in Safdarjung Road, New Delhi. She was killed by her bodyguards, Satwant Singh and Beant Singh who belonged to the Sikh community. The killing was in reaction to Operation Blue Star that was ordered by the Prime Minister and in which Sri Harmandir Sahib, the most sacred shrine of the Sikhs was attacked by government forces to flush out Sikh militants. The operation caused terrible hurt to Sikh sentiments which served as a trigger for the assassination of the prime minister.

Post the assassination, as the nation was struggling to come to terms with the unfortunate tragedy, a catastrophe of unimaginable proportions started building up. The very next day, November, 01, witnessed widespread attacks on members of the Sikh community across the country. The numbers killed have never been clearly recorded or made public, but various estimates put them much above 10,000. According to official records, 2,733 Sikhs were killed in cold blood in Delhi alone, though human rights organisations place the number nearer to 4,000. The numbers in the remainder parts of India continue to defy documentation. This apart, Gurdwaras (Sikh Temples) were damaged; shops and other businesses run by the Sikhs were destroyed, their houses looted and women raped.

The killing was carried out in the most barbaric manner by use of weapons like swords and daggers, beating the victims to death and burning them alive. The most inhumane method used was enclosing the Sikh victim in a vehicle tyre and then setting it on slow fire. The madness went on for a number of days as the law enforcing machinery refused to intervene.

There have been attempts to pass of the genocide as a spontaneous reaction of the people distraught at the killing of their prime minister. A closer scrutiny however point towards a very well conceived and coordinated plan to “teach the Sikhs a lesson.” 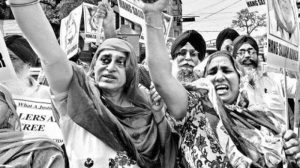 No First Information Report (FIR) was filed in the immediate aftermath or cases registered in court, nor did any court call for action. The Delhi police finally filed only 587 FIRs. Out of these, 241 cases were closed citing lack of evidence. Four of these cases were later reopened and reinvestigated.

In the last 35 years since perpetration of the genocide, four commissions and nine committees have looked into the carnage. In recent times, since, 2015, two Special Investigation Teams (SITs) have been constituted to carry out investigation.

Going back to 1984, when international pressure became too much, the government constituted a committee under Ved Marwah, Additional Commissioner of Police. It was constituted in November 1984 and dissolved in 1985. The proceedings of the Marwah Committee were handed over to the Misra Commission whose findings were made public in February 1987. The commission stated that its term of reference was to determine “whether the violence had happened”, and not “identify any person” or their role. It further recommended that three more committees be set up, (1) to look into the role of the police, (2) for registration of cases, (3) to determine the total number of killings.

The tryst for justice gained momentum once more in the year, 2000, when the NDA Government, under Prime Minister Atal Bihari Vajpayee came to power. A unanimous resolution was passed in the Rajya Sabha, resulting in the formation of a new commission under retired Supreme Court Judge G.T. Nanavati. The commission issued notices to HKL Bhagat, Sajjan Kumar, Jagdish Tytler and Kamal Nath among others, all known to be close to Rajiv Gandhi. Shamefully, Kamal Nath was placed as Chief Minister of Madhya Pradesh by the Congress.

The report submitted by the Nanavati Commission in May, 2005, was damning in its observations. “The systematic manner in which the Sikhs were thus killed indicate(s) that the attacks on them were organised,” it said. “Large number of affidavits indicate that local Congress (I) leaders and workers had either incited or helped the mobs in attacking the Sikhs… There is enough material on record to show that at many places the police had taken away their arms or other articles with which they could have defended themselves against the attacks by mobs,” it added.

According to open source media reports (The Print), of the 587 original FIRs registered as per the Nanavati Commission, only 25 of the cases have so far resulted in conviction, of which only 12 are murder cases.

A year after the BJP government came to power in 2014, a new committee called the Mathur Committee was constituted and on the basis of its recommendations the government put in place a three member Special Investigation Team (SIT) in 2015. The team was given six months to complete their task and submit their report to the Ministry of Home affairs (MHA); the term was later extended to August 2016.

The mandate of the SIT was to “reinvestigate the appropriately serious criminal cases which were filed in the National Capital Territory of Delhi in connection with the 1984 riots and hence since been closed.” It was also asked to file fresh charge sheets against the accused where evidence was available.

The SIT secured the first conviction in November 2018, when a Delhi court awarded death sentence to one of the accused and life imprisonment to another for killing Hardev Singh (24) and Avtar Singh (26) at Mahipalpur. These cases had been closed by Delhi Police in 1994 due to “lack of evidence.”

As reported in the media house Al Jazeera, “Out of the 75 cases that were to be reopened, 22 have been short-listed as it was felt that those cases had more ground for investigation. The advocates of these cases are working closely with the victims, and advertisements have been put up in the newspapers, calling out the victims to contact the SIT.”

A veteran Congress leader Sajjan Kumar has been sentenced to life imprisonment in a case relating to the killing of five members of a family in Raj Nagar. He has appealed to the Supreme Court but has not been granted interim bail. In the bail hearings Sajjan has been described by the CBI as the “kingpin” of the  gruesome offence of massacre of Sikhs in the national capital in 1984. The argument also comments that  it would be a “travesty of justice” if Kumar is enlarged on bail as he is facing trial in another 1984 anti-Sikh riots case at Patiala House district court. The supreme court has not granted bail.

Another Congress leader Jagdish Tytler, who has denied any role in the riots, was thrice given clean chits by the CBI in the case, but the agency was directed by the court to further investigate the matter. An arms dealer, Abishek Verma,  is a witness in a case of riots at Gurudwara Pulbangash in North Delhi where three people were killed on November 1, 1984 and in which Tytler is said to be involved.  Pressure for pursuing the cases against Kamal Nath, is also being exerted.

The assassination of the prime minister took place at 0920 hours on October, 31; the sad news was broadcasted by All India Radio at 1100 hours after she was declared dead by the doctors at the All India Institute of Medical Sciences (AIIMS), New Delhi. Rajiv Gandhi, the son of the demised prime minister and later prime minister of the country, arrived at New Delhi at 1600 hours. Till then there was no killing, even as isolated incidents of violent demonstration in the national capital were reported. The first indication of something bigger brewing came when the cavalcade of the Sikh President of the Nation, Giani Zail Singh, was attacked by stone throwers.

On night October 31/November 01, organised and equipped gangs dominated the streets of Delhi and were involved in acts of violence and destruction of property. Sane voices within the city urged the government to intervene but the response was merely cosmetic. The first murder took place the next morning at about 0900 hours and then the floodgates opened. The madness perpetuated in Delhi found resonance in the other parts of the country.  On the face of it, restrictive actions like curfew were announced but they were not implemented on ground.

In this environment of utter depravity the only saving factor was such people who came out to help the Sikhs despite the grave dangers involved. They gave shelter in their houses and later provided assistance in the refugee camps. 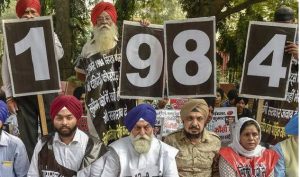 The complicity of the political party in power became more visible when its leader, Rajiv Gandhi, failed to condemn the wanton killing of Sikhs. He, on the other hand, attempted to justify the same.  “We must remember Indira Ji. We must remember why she was assassinated. We must remember who could be the people be behind it. When Indira Ji was assassinated, some riots took place in our country. We know the hearts of Indians were filled with anger, and for some days, people felt that India was shaking. But when a big tree falls, then the earth does shake a little,” he said in a condolence rally organised in commemoration of his mother, the demised prime minister.

In the last 35 years, justice for the hapless Sikh victims of the genocide has not been forthcoming in the national capital, New Delhi, what to speak of the other states where even the process has not taken off. “Those who have witnessed the horrors of the massacre still go through depression, while many had dropped out of school due to the trauma,” says HS Phoolka, a lawyer who has been representing the riot victims in various cases for many decades now.

Also related to the sad event is the issue of compensation that has not been forthcoming and thus forms another travesty of justice. Timely compensation would have assisted in rehabilitation; it would also go a long way in building trust in the Government and the Nation. 1984 represents both the failure of governance and a diabolical cover up by the government of the day and, in particular, its agencies. The system of justice was subverted. The culture of impunity was given a free run.

(Jaibans Singh is a reputed journalist, columnist and author)