Bhartiya perspective of education, ‘Sa Vidya Ya Vimuktya’, denotes education as the way which liberates human beings. Pandit Deen Dayal Upadhyaya, was great supporter of this panegyric as he believed in holistic development of human being through education. Upadhyaya ji, himself was also a talented student; he earned many scholarships in his life.

Upadhyaya ji, presented a great philosophical principle of ‘Integral Humanism’ which can be considered the outline of the comprehensive development of a person’s personality. He promoted the continuous and integrated program of every human being’s body, mind, intellect and soul. Realisation of ‘Vyashti’, ‘Samashti’, ‘Srishti’ and ‘Parameshti’ according to Bharathiya ethos is crux of his philosophy. The education is the way to realize these enlightened values.

In his view, foreign influence, foreign ideology and foreign life-values impede the progress of any country. By Inculcating English values in Bhartiya education, present education system has disregarded the soul of the Bhartiya nation and therefore Upadhyay ji encouraged the change in present education system and inclusion of Bhartiya values in education. He believed that the educational and life-values are developed according to the aims and objectives of the society. We as Bhartiya society have different social and ethical value-system and hence need own kind of values and value-system for our students.

Upadhyaya ji supported the vision of four Purusharthas envisaged in ancient Bhartiya philosophy i.e. Dharma: (Righteousness or Duty), Artha: (Wealth or Money), Kama: (Desire) and Moksha: (Liberation or Salvation). In his views, a human being can be complete only when he is capable of achieving all the four Purusharthas of life. Only formal education is not capable to develop comprehensive personality of students. Therefore, he supported the amalgam of formal school education and Informal Sanskaar Shiksha for the students. 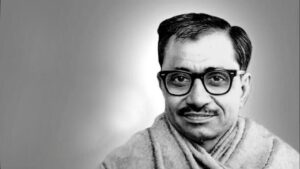 Education converts man into human.  Human building leads to society building and that leads to nation-building. He was of the view that education should be able to create such circumstances which develop the multi-dimensional personality of students. The form of education should be such that there is development of co-ordination between the student and the society and there should be development of greater social feeling within the student as ultimately the student has to become a carrier of the progress of society and country. In his views, the overall development of the nation is possible only through social welfare and the fundamental medium of social welfare is education.

He was a great admirer of Bhartiya culture and ethos as he expressed that “if one has to understand the soul of Bharat one must not look at this country from the political or economic angle but from the cultural point of view. ‘Bharatiyata’ (nationhood of Bharat) can manifest itself not through politics but through culture. If we have anything that we can teach the world, it is the feeling of cultural tolerance and a life dedicated to duty.” (Excerpt from the book – “Pandit Deendayal Upadhyaya: A Profile” edited by Sudhakar Raje.). There should be an expression of Indian culture in the Indian education system. Preservation and promotion of our cultural values should be an essential part of education.

Nationalism is the core value of educational philosophy of Upadhyaya ji. In his views, India not only represents the country’s geographical unity, it also reflects the Indian view of life, expressing unity in diversity. India is therefore not for us a political slogan that we have adopted because of the specific circumstances, but it is the cornerstone of our entire philosophy. He also supported ‘Dharam-Shiksha’ to be taught in our education system and neglected the idea of secular education in Indian perspective. For him, Dharma is not ritual but moral duty or righteousness.

He also focused on the quality of teachers as his philosophy highlights the ancient Indian hymn ‘वयं राष्ट्रे जागृयाम पुरोहिताः  He was of the view that curriculum must be oriented towards holistic development of personality including development of character of the students. In concluding remarks, it can be said that his educational philosophy is relevant today to attain 21st century values i.e. social justice, individual freedom, economic self-dependence, self-control, self-realization, sustainable development, cultural preservation etc.