You are here: Home / Areas of Study / Governance & Politics / BJP is creating a vibrant social and political space in Punjab
Share 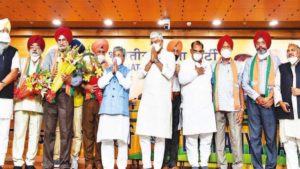 The Punjab unit of the Bharatiya Janata Party (BJP) is poised to extend itself to a pan-Punjab configuration and create a vibrant political space for itself in the state. The move is historic since for many decades the Punjab unit of the party has been in a political coalition with the Shiromani Akali Dal (SAD). Recently, the SAD broke the alliance in a most immoral and opportunistic manner. The intention of the BJP to fight the forthcoming state assembly elections from all constituencies was declared earlier but serious work in this direction is now underway.

The first indication came on 15 June when the party, in an impressive function at its head office in New Delhi and in the presence of senior leaders dealing with Punjab, inducted six prominent Sikhs into the party fold. These Sikh personalities inducted have been active in the political, social and academic arena and are expected to gainfully contribute towards the restructuring  of the party for a statewide signature.

The party realises that its image suffered a setback due to the misinformation and disinformation spread by its antagonists in the wake of the farm agitation. It also suffered due to the sudden break-up engineered in the most immoral manner by its long time ally, SAD, that had enjoyed great power and privilege from its association with the party .

There was a spate of resignations from the party in the aftermath of the farm agitation and the break-up with SAD. Now the worst is behind the party. Those who were disloyal and opportunist have left and those remaining can be depended upon to move on the path of resurgence. The willingness of new people to join the party fold has come as a catalyst.

The reason behind the surge in joining BJP is not hard to find. Punjab is facing a huge crisis of weak almost non-existent political leadership and a resultant trust deficit that is directed towards the entire political eco-system. The Congress in particular has been exposed as self serving and corrupt, having failed to keep its poll promises made in 2017.

More particularly, the Congress has failed to bring to book the criminals responsible for desecration of Sri Guru Granth Sahib in the Bargari sacrilege case. Congress Chief Minister, Amarinder Singh, had vowed to carry out investigation and punish the offenders including those who were responsible for opening fire and killing innocent people at Village Behbal Kalan. The five year term is at and end an nothing has happened.

The Congress leaders are conscious of the negative political fallout of this procrastination by the CM which is seen as a result of a personal agenda. They are fearful of facing the people under the prevailing circumstances  and are up in revolt against him. The Congress, thus, is enveloped in an internal tussle at a time when its entire energy should have been directed towards fighting the COVID challenge. The prevalent situation is causing great anguish to the people of Punjab. 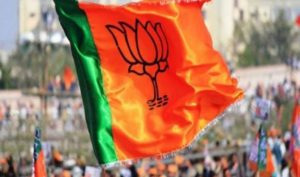 The people are not ready to forget or forgive the role played by the SAD in the Bargari sacrilege incident. SAD therefore is on  a very weak wicket so far as acceptance is concerned.  The party is now attempting to play out politics of religion  with assistance from the Shiromani Gurdwara Prabandhak Committee (SGPC). The people, however, have seen through the gambit and will not fall for it.

Under the circumstances the people have started looking at BJP as an alternative to fill the leadership vacuum. The incident free acquisition of the wheat crop by the central government with  immediate payment of dues has convinced many that the farm bills are not as diabolic as they have been made out to be. There is a thought process that the offer of changes made by the government should be accepted.

The emerging political environment and the decision of the BJP to contest from all state assembly seats in the 2022 polls has so flustered the other parties that they are resorting to violence to  cow down the BJP workers and office bearers. There have been many instances in the recent past where violent attacks have been made on BJP leaders and cadres while they were carrying out legitimate political activity. An attempt was made to hide the political intent of the violent activity under the garb of anger from within the farming community. The truth, however, is not hidden from anybody; the violence constitutes a premeditated attempt to cow down the BJP cadre. Inability to contain the violence indicates the complicity of the ruling dispensation apart from being an abject failure in maintaining law and order. The BJP cadre, however, has not been intimidated by the attacks; it, in fact. stands enthused by them towards meeting the challenge.

There are many other aspects that go in favour of the BJP. The chief among them is the relentless hard work that the BJP cadre has put on ground to in the fight against the Corona virus in the state.  Many individual volunteers and community groups of the party stepped out to provide ambulance services, oxygen support, free medical advice and food etc. They have, in particular, looked after the elderly and those without support.  Some BJP workers even lost their lives in this effort but the momentum continues to be maintained. The people of the state have seen all the good work done and it has touched an emotional chord, the bond between various communities that was sought to be broken has in fact strengthened.

People are realising that the BJP, with its inherent discipline and the most significant quality of keeping merit in leadership foremost instead of the dynastic policies is the best choice for Punjab. The party also comes with massive support from the centre which is required to get Punjab out of its financial mess and the breakdown in law and order. BJP is also in a position to address other critical issues like unemployment, breakdown of education, health and other facilities. endemic drug abuse, migration of youth to foreign shores etc. Most importantly it is only the centre that can bring the criminals of the sacrilege case to book.

Punjab is poised to rid itself of corrupt and ineffective governments that have brought things down to the prevalent disastrous levels. In the forthcoming assembly elections the people will set aside all propagandist misinformation and disinformation and use only rationale in the selection of their government. The BJP is positioned as a serious contender to take on the responsibility.

(Jaibans Singh is a Geo-political analyst, columnist and senior member of the BJP)