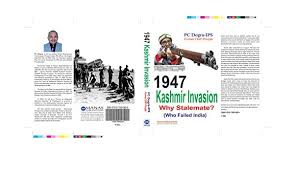 Intrigues,conspiracies and fickle minds shaped the post-partition turmoil in J&K

Kashmir has been an inextricable thorn in the Indo-Pak relations which have remained strained ever since the partition.A series of incidents marked with intrigues and conspiracies overwhelmingly cast an ominous spell on the period and underscored conspiratorial designs at work.

The role of the Indian leaders, particularly that of Pt Jawahar Lal Nehru and Sheikh Abdullah,reflected their myopic vision and their crass inability to handle the crisis dexterously in the interest of the nation. So,  even after more than 70 years there seems to be no end to the conflict. Thousands of lives have been lost on either side of the Indo-Pak border, yet there is no hope of peace.

In his succinctly written book, 1947 Kashmir Invasion, Why Stalemate? Who Failed India,  former Punjab DGP PC Dogra, IPS(Retd), had delved deep into the factors that allowed the situation to boil on the border putting India permanently on a back foot.

Dogra, who has , so far ,authored three books and was instrumental in setting up of the Forum For Integrated National Security in 2003, has squarely underlined  Lord Mountbettan, Jawahar Lal Nehru and Sheikh Abdullah as the three characters  who scripted the ever-contentious history of the region to make the future generations suffer indefinitely.

Running into 260-odd pages the book quotes extensively from a number of references to substantiate the argument.

At the outset the author builds his premise that Pakistan had plotted soon after the partition  to coerce Maharaja Hari Singh to cede the Jammu and Kashmir state by signing Instrument of Accession in its favour and soon after the Partition the Pakistan Army aided by the Pakistan Prime Minister raised units of Lashkars which comprised tribesmen, equipped them arms and ammunition. The Pakistan Army had code-named it as Operation Gulmarg for which the D-day was fixed on October 22, 1947.

It was officially stated that the Lashkars were operating against Kashmir from bases in Pakistan with their modern military equipment like mortar, artillery and Mark v mines which could only be sourced from the Pakistan Army.

British design for building up Pakistan with Kashmir as a part of it.For this Lord Mounbettan made special efforts to warm up with the Pakistan authorities. Quoting Christopher Thomas, the book builds an argument about how it was a strategically carried out exercise by the British to properly up the Pakistani invaders and put the region on the boil. Thomas is quoted as saying

“It is entirely possible that the British incited the revolt by the tribals to ensure that the strategically vital region of Gilgit and Baltistan came under Pakistan’s jurisdiction in the expectation that Pakistan would cooperate in the Western defence pacts to block Russian ambitions”.

That the British wanted the region to go to Pakistan as India could not have allowed it to be used for spying or mounting attack on the then USSR happens to be a key eye-opener for the reader..

Could this be the reason that Lord Mounbatten kept Pt Nehru on tenterhooks and endorsed the Pakistan aggression covertly ?

After all, there  were large scale raids all along the border starting from Kathua to Bhimber by tribesmen totally supported by the regulars from the Pakistan Army, armed with modern weapons and commanded by the officers of the Pakistan army. 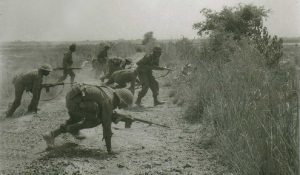 The chapter “Mountbatten as Governor General of India looked after the interests of Pakistan unconstitutionally” makes an interesting reading if only to underscore how Mounbatten did not want any Indian military operations against Pakistani raiders. Instead,”he wanted India to enter into negotiations with Pakistan…..No reinforcements were given to Srinagar, obviously as per the plan to blunt the Indian offensive. The Indian army was in a helpless state.”

The role of Maharaja Hari Singh compounded the matters no less.. He had three choices. First, to  accept accession to India, or  accession to Pakistan or stay independent. That he remained confused till driven to the wall only helped others to build on intrigues and conspiracies.

Josef Korbel, the then acting chairman of the UN Commission on Kashmir, said “Hari Singh favoured independence. Mounbatten told Hari Singh in June that Kashmir could not remain independent because neither India nor Pakistan could permit it. The Viceroy visited Hari Singh to make up his mind either way.

When Lord Mounbatten visisted Kashmir in June 1947, he advised the Maharaja to accede to Pakistan in consideration of its Muslim majority. If not he would have to agree to joining India..

So, Kashmir problem as it obtained today is a legacy of indecisive and weak leadership during the times. How Mounbattan plotted the call for plebiscite and how Nehru fell in line with it is another serious aspect that has been discussed in much detail.

Mountbatten writes to Maharaja Hari Singh…” my government has decided to accept the accession of the Kashmir state with the premise that it is my government’s wish that as soon as the law and order have been restored in Kashmir and her soil cleared of invaders, the question of the state’s accession should be settled by a reference to the people”. No such condition was added to the instruments of accession of other states. But the will of Mounbettan had to preail and Pt Nehru just gave in.

After Maharaja had acceded, what was the need for plebiscite?  Mr Jinnah had openly proclaimed that legally speaking the question of accession depended entirely on the choice of the ruler and the people of the state had no right to question his choice”.

Mounbatten, on the other hand, had been advising the Mahraja not to accede to any of the two dominions without ascertaining the wishes of his subjects by referendum,plebiscite, election oy representative public meetings”.

Pt Nehru, on the other hand, was in no mood to accept the accession unless and until his friend Sheikh Abdullah was firmly put in the saddle in J&K. “Nehru did not want a Muslim-majority state to accede to a non-Muslim majority country if the accession was not backed by the main political party of the state and its leader.

The book recalls a narration by Dr Karan Singh, ” National Conference met in September 1949 in Srinagar. Prime minister Nehru was also present. During the celebration the Indian national flag was conspicuous by its absence…the state flag had disappeared…it was the National Conference flag which was adopted as the state flag. Sheikh Abdullah kept arguing for an independent Kashmir guaranteed by the United Nations”.

“On 21 November Nehru made a statement in Parliament and reiterated his promise that the people of Kashmir would be given a chance to decide their future under the supervision of an impartial tribunal such as the United Nations Organisation”.

Just when Indian offensive was making headway, Pt Nehru started talking of a settlement with Pakistan and that left a big chunk of the Indian territory with Pakistan. It is from this region that Pakistan handed over the Aksai Chin sector to China and made this region a long-standing irritant for India to settle.

The chapters like “Was Nehru under emotional influence of Lord Mountbatten and Lady Edwina?”, “Mounbatten pressurised Nehru for reference to UNO”, “Pt Nehru himself was anti-Mahraja” delve in detail how Nehru failed to measure up the gravity of the situation and thus left a permanent thorn in India’s flesh.

(The writer is a Chandigarh-based senior journalist)