You are here: Home / Areas of Study / Governance & Politics / China has no claim on Tibet &East Turkestan, what to talk of Ladakh
Share 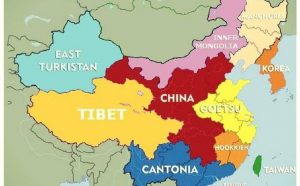 The history of South Asia and China was dominated by the British broadly from the 17th century  to mid-20th century. Today, almost seven decades after the exit of the British, India and China remain unable to reconcile to their new destinies and move on. Border demarcation done at the time of the British rule has become an issue and is dominating the political spectrum. Over almost seven decades and even after fighting a full-fledged war, it has not seen settlement. To find a way forward  it is necessary to go briefly into the history that impacts the situation.

Ladakh was conquered by General Zorawar Singh and amalgamated into the Sikh Empire in 1834. After the first Anglo-Sikh War, 1845-46, the British took Kashmir Valley, Ladakh and Gilgit-Baltistan as war indemnity from the Sikhs and, in accordance with the Treaty of Amritsar, sold the territories to Gulab Singh, the Dogra Rajah (King) of Jammu for a sum of Rupees 7.5 million.  Thus was created the state of Jammu and Kashmir with the title of Maharaja bestowed upon Gulab Singh by the British. The royal Namgyal family of Ladakh was given Stok as Jagir, which it retains nominally to date.

Jammu and Kashmir remained a princely state all through the British rule. The Dogras administered Ladakh as a Wazarat (principality) with an independent Governor on three Tehsils (Districts) of Leh, Skardu and Kargil.  Ladakh was given two seats in a Legislative Assembly called Praja Sabha that was established in 1934 by Maharaja Hari Singh of Jammu and Kashmir in an attempt to usher democratic tenets into the monarchy. 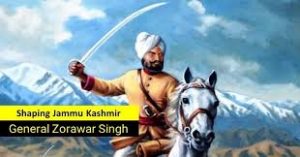 China too has a diverse and interesting trajectory of evolution. In the 19th century (after 1932) the British had already started getting seriously involved Chinese politics. As a consequence of the Opium Wars a fair degree of control over Chinese affairs came in the hands of the British. In 1912, the Qing dynasty declined in the face of challenges from abroad and internal revolts. The British hold strengthened.

Around that time, the demarcation line between Tibet and the North-East region of India was created and named the “McMohan Line.” It was ratified in 1914 by the Simla Convention between British and Tibetan representatives.

With the decline of the monarchy, China embarked on to a tryst of becoming a Republic. The journey of transition was long and arduous, marked by a long struggle of power mainly between  the Kuomintang (KMT) also referred to the Chinese Nationalist Party and the  Communist Party of China that came into existence in 1921. After thousands being killed in debilitating civil wars ultimately, on 1 October, 1949, mainly due to Soviet support, the communists gained control of mainland China in what is generally referred to as the Chinese Communist Revolution. Mao Zedong, became the founding father of the Peoples Republic of China (PRC). Communist China moved swiftly to gain control over many neighbouring areas of which East Turkmenistan, Tibet and South Mongolia are the most prominent.

Significantly, India has borders only with the occupied territories of East Turkestan and Tibet and not with mainland China. Also, the McMohan Line was not contested all through the period of political turmoil in China and Tibet, nor was it contested at the time when the British left India.

Two factors emerge from the foregoing. First, Ladakh was a part of India about 87 years before the PRC came into existence and 115 years before it gained power in China. Second, the Government of China at the time when the British were leaving the sub-continent did not object to the McMohan line. PRC was quite powerful even then, it could have raised an issue but it did not. 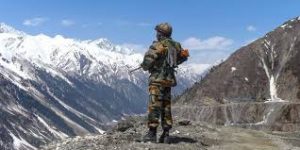 The first prime minister of India, Pandit Jawaharlal Nehru, having accepted the Suzerainty of China over Tibet refused to be party to negotiations based on a perceived boundary dispute between the two countries. He insisted that the boundary stood resolved along the McMohan Line. In this he had the complete support of the Indian Parliament.

China, rejected and continues to reject the Simla Accord contending that Tibet was not a sovereign state and therefore did not have the power to conclude treaties. Chinese maps show some 65,000 sq km of territory south of the line as part of the Tibet Autonomous Region (TAR) and calls it South Tibet.

China, however, had tacitly accepted the Line of Actual Control (LAC) as it exists between East Turkestan and India . In a letter to Nehru dated 24, October, 1959, Zhou Enlai proposed that India and China withdraw their forces 20 kilometers from the LAC. Even after the Indo-China War of 1962, the Chinese unilaterally withdrew to the earlier demarcation of the LAC, except for Aksai Chin.

History is replete with instances of great Empires breaking  due to overextension through forcible subjugation. The latest example is the breakup of the USSR. Communist China has forcibly occupied Tibet, East Turkestan, South Mongolia and other territories. There are voices being raised against this forcible occupation and against incidents of gross human rights violation of the people of these areas by the repressive Chinese regime are being reported.

Being unable to control what it has, one wonders as to why China is nibbling into Ladakh and Arunachal Pradesh where it has no jurisdiction or justification of claim whatsoever.  For the sake of a few kilometers of territory that does not even belong to it, the country is jeopardising goodwill and Billions worth of trade with India. It is unwilling to understand that the huge potential of Ladakh and Arunachal Pradesh can be best leveraged by both countries through friendly relations. In fact, East Turkestan and Tibet will contribute more to the prosperity of mainland China if they are freed from the existing shackles and blatant suppression.  Significantly, India and China are harbingers of the prosperous future of the region being super powers. They should understand their responsibility.

India needs to rework its posture on its borders on the basis of historical facts. If at all, borders can be discussed only with Tibet and East Turkestan as and when they gain independence. There is nothing to be discussed with the PRC and  the McMohan Line remains the irrefutable border. An attempt by China to change the same should be termed as aggression against the sovereignty of India and dealt with accordingly. Diplomatic and military attempts need to be made to get back Indian territories under forcible occupation of China.

(Jaibans Singh is a geo-strategic analyst, writer and commentator)