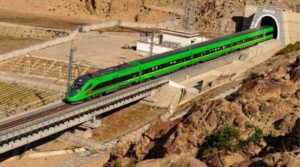 The South China Morning Post reported on 26 June, 2021 that a rail link between Lhasa and Nyingchi in China Occupied Tibet (COT) is now operational. The first electric high speed train steamed into Nyingchi station from Lhasa after travelling for 3.5 hours at 1030 on 25 June, 2021.The highest speed achieved by the train was 160 kmph. “This dream project is a gift to the peace loving people of Tibet from Beijing as part of the centenary celebrations of the Chinese Communist Party (CCP),” said the Global Times, a mouthpiece of the party.

Sichuan Tibet Railway Project originates from Chengdu and passes through Yaan to enter COT at Quimdo and reach Lhasa via Nyingchi. It will shorten the journey from 2 days to just 14 hours. The project has been undertaken by the Tibet Railway Construction Company, a subsidiary of the China State Railway Group. Work started in 2014; the cost of the project is 40 billion Yuan ($ 8 billion) and it is likely to be completed by 2030. The Lhasa-Nyingchi  link is a part of this project.

The Lhasa-Nyingchi link is a single line totally electrified track at an average height of 3000 metres above sea level; trains can run on the track at an average speed of 100 kmph. There are nine stations on the route. The railway line is an engineering marvel as it runs along treacherous Yarlung Zangbo River (Brahmaputra River) that it crosses 16 times. The rail track passes through 47 tunnels and 120 long bridges. The monthly freight capacity will be 1 million tonnes and 50,000 passengers/troops.

It is claimed by China that the train link will bring prosperity and economic development to the roof of the world. Zhu Weiqun, the Tibet affairs party spokesman stated that this rail road will help transport advanced equipment and technologies from mainland China to underdeveloped Tibet and also help to develop and export local industries. In actuality the 436 km Lhasa-Nyingchi link and the entire Sichuan Tibet Railway project is of strategic importance to China in the eventuality of a conflict with India since it will assist in quick ferrying of men and material to the Line of Actual Control (LAC).

There are various other infrastructure development projects to link COT to the mainland. Last month, a strategic highway was completed through the grand canyon of Yarlung Zangbo river joining Chengdu to Lhasa via the Medong area close to the LAC with India. Qinghai Tibet Rail Link is already operational. Another railway project that links Lhasa to Shingste in central Tibet was completed in 2014. Nepal communist party has signed an agreement to establish a rail link between Shingste and Kathmandu via Gyirong, a 556 km stretch. The Nepal segment will be 72 kms and the project will be completed in 2022. These projects will cover the entire north eastern Indian border by 2030. 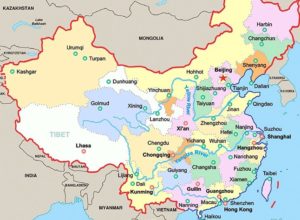 Qinghai-Tibet Railway project was the first rail link from any Chinese province to COT. It was started in 1984 and completed in 2006. Xining, the capital of Qinghai was the first station and Lhasa was the last station.

Chinese air bases have also been upgraded at Goggar airport Lhasa and Mainling Airport. Nyingchi, Qimdo and Shingste airstrips have been created all along  the Mac-Mahon Line. The upgrading of airlift facility will add significantly to the logistic capability of the PLA.

The LAC, a virtual border between China and India is 3488 km long; 1597 km falls in Ladakh Union Territory, 200 km in Himachal Pradesh, 345 km in Uttrakhand , 220 km in Sikkim and 1126 km in Arunachal Pradesh. With these projects in place, the Western Theatre command of People’s Liberation Army (PLA) (which has limited resources) can be  reinforced by the Central Theatre Command located at Beijing and the Southern Command located in Yunnan at a much faster speed. The military trains will be able to ferry Armoured Fighting Vehicles ( AFVs), Infantry  Combat Vehicles (ICVs), Artillery Guns, troops, ammunition, war stores and rations etc directly to assembly areas along the LAC. The limitation of road, rail and air movement will be overcome and mobilisation will be much faster.

The Mac-Mahon Line from Kibuthu, Walong, Taksin to Bum la, Tsengle till Bhutan will be under threat. The China-Nepal Train link, once completed, will threaten Sikkim from the west also. The PLA  will be able to move into Nepal  through its rail and road corridor with collaboration of the communist ruling party in power.

The Indian response is well balanced and gathering momentum. The Government of India is seized with the challenge of improving the infrastructure along the LAC and in the approach areas of the hinterland at a fast pace. The Dhola-Sadiyia bridge, a 9.1  km long  Class 70 Bridge on the Lohit River in Assam was completed in 2017. The Bogibeel bridge, a 5 km long rail road bridge over the River Brahmaputra between Dhemaji and Dibrugarh was commissioned in 2018; it improves communication lines between Assam and Arunachal Pradesh. The Atal Tunnel, a 9 km long  road link at the Rohtang pass, became operational in 2020. These are the engineering marvels and a befitting reply to China, They will ensure  faster and adequate mobilisation by the Indian Army.

In the last two years, more than 100 roads and 50 bridges in border areas have been upgraded by the Border Road Organisation (BRO). This includes the Daulat Beg Oldie to Shyok-Darbuk road that caused the face-off at Galwan in 2020. The Indian Air Force has also located its most advanced aircraft like Rafale  and Sukhoi 30 MK-l in a manner that ensures a quick response to any misadventure by China.

China should realise it has to now contend with a politically strong and militarily  robust India of 2021 that is ready for all eventualities along the LAC. The massive expenditure that the neighbouring country is incurring to build up infrastructure is not likely to give to it any military advantage over India.

(The author is an Army veteran, Geo-strategic analyst and columnist)