Punjab has, since millenniums, been home to a number of ethno-religious communities. The region takes pride in its diversity and has always remained open to the coexistence of different religions and faiths. This ethos and tradition continues to date. In the present context, Sikh are a majority religion while Hindu, Islam and Christianity continue to be practiced along with other smaller religions.

In mid-19th century. Punjab became a part of the British Empire and evangelistic efforts by Christian missionaries gained momentum. The first preachers came from Europe and they quickly created a local base with translation of Christian texts, including the New Testament and the Gospel, into both Hindi and Punjabi. The conversions were, by and large, due to two reasons. First, to remove the shackles of the caste system which led to conversion of Hindus. Second, to take benefits that being a Christian entailed, especially in the field of education and health.

In colonial Punjab, maximum concentration of Christians was in Gujranwala, Sialkot and Sheikhupura districts. The most prominent Christian of Indian origin in the early twentieth century was Raja Sir Harnam Singh , a scion of the Kapurthala  Royal family who put in a lot of effort towards spreading the word.

The Punjabis who chose to convert to Christianity continued to observe cultural affinity with Punjab to include use of Punjabi language, cuisine, dress code and other aspects. They also actively participated in the various festivals, traditions and customs of Punjab.

At the time of partition areas with a larger concentration of Punjabi Christians went to Pakistan where they chose to stay. This was the beginning of the horror that they are witnessing till date. In Pakistan, the Christians have been reduced to menial jobs, mainly sanitation, and continue to be called “Churas” (sweepers). They have been kept  in a state of poverty and lack of development since the elitist Punjabi Muslims do not wish to do menial jobs and are content in having Christian serfs doing the same for them. They continue to be nothing more than bonded labour. In Pakistan Punjab alone an estimated 80 percent of the sweepers and cleaners are Christians.

Christians in Pakistan are being subjected to the most horrendous form of persecution. Apart from an impingement of their fundamental rights in terms of education, health and other facilities that the state is bound to provide to them, they are being subjected to horrifying human rights violations. Hundreds of them have been killed or incarcerated under the infamous Blasphemy Law; many continue to languish in jails without any judicial support whatsoever.

International Christian organisations have been attempting to give legal support to these hapless people. There are instances, like the case of Asia Bibi, who was given a death sentence for blasphemy, later commuted  due to pressure from western countries. She has now left Pakistan having been granted asylum in France. Such good luck cases, however, are few and far between; most are killed for so-called Blasphemy or spend their lives in jail. By and large the Christians of Pakistan are a suppressed, exploited people who are not even allowed to seek refuge in India since they are required in their country to do all the dirty work. 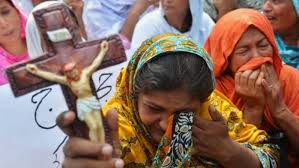 Christians protesting against atrocity in Pakistan

Christians are settled all across Indian Punjab but are more concentrated in Gurdaspur, Amritsar, Jalandhar, Ludhiana and Firozepur Districts. They too predominantly belong to the lower strata, but, due to equal opportunity being provided by the democratic Indian state, many have acquired good education and are on to jobs in different fields. There are Christians in the higher strata of society too as is seen in the large cluster of the Masih Christian community.

While the census puts the Christian population in the state at about one or two percent some senior members, pastors and social activists of the community  like Imanul Rehmat Masih , Father Peter Kavumpuram, spokesperson of Jalandhar Diocese and George Soni, President of the Punjab Christian United Forum say that it stands at about 7 to 10 percent. It is on this basis that the Christian community leadership is making demands for more representation in the State Legislative Assembly by grant of minority community status  and reservation under backward classes.

Successive governments have been seized with the effort to provide special impetus to the Christians. The Shromani Akali Dal-Bharatiya Janata Party coalition Government had established a Christian Welfare Board in July, 2016. It was through the proceedings of this Board, under its chairman Salamat Masih, that instructions have been passed by the Government to Rural Development and Panchayat Departments to indentify common village land (‘Shamlat’) and provide additional and adequate burial grounds for the community across the state. There are various concessions in education, state, employment etc. that are being given to Christians.

Christianity has a strong Church with established practices to look after the spiritual needs of the followers. The d preachers take vows of the Church and become a part of the theological structure for life. They have a set hierarchy and appointments and are addressed as Father, Mother and Sister.  They look after the Churches and other religious. social, education institutions, conduct all religious practices and give sermons. There are negligible extra-constitutional  institutions involved in preaching practices in the Christian faith.

Surprisingly, Punjab is witnessing rapid proliferation of Christian Deras (religious sects) as is the case with other religions also. This is a deviation from established religious ethos and tradition of the Church and is also resulting in blatant exploitation of the emotions and sentiments of people in the name of name of Christianity and more critically, Jesus Christ. Normal people who have no education in Christian theology or the necessary sanction to preach, are becoming self styled “Apostles” and “Pastors” of these new age Deras. In the bargain they are earning huge amounts and have tremendous power as in the case of Dera chiefs of the Sikh and the Hindu communities.

These Christian Dera chiefs belong are mostly first generation converts from among Hindus and Sikhs alike and from different castes like Jats, Khatris etc.  They are media savvy and have a considerable presence in various mediums of social media, especially You Tube, Face Book, Twitter and Instagram. While on stage they behave like Rock Stars complete with music, props and attendant drama.

They hold the pulse of people and speak about the problems faced by Punjabis especially in rural areas. They are adept at hitting weak spots and speak of miracles being performed in the name of Jesus Christ to remove diseases, alcohol dependency, drug abuse, marital discord, depression etc. They have managed to build their own Churches without sanction from established Christian authorities. They also have community halls and what they call open door Churches. In the process they have amassed untold wealth and are seen living in palatial houses while driving around in luxury cars.

The above is creating trust deficit between the Christian community and the other communities of Punjab since it is perceived as a well organised system to carry out conversion to the faith, especially of those who belong to a marginalised section, are less educated and vulnerable to psychological manipulation.

The deteriorating social, economic and political situation in Punjab also has a big role to play in the ongoing religious churning being witnessed. Post the attack on Durbar Sahib in 1984 and the long period when Punjab was in the throes of debilitating militancy, there was a perceptible leadership vacuum, especially so, in the Sikh community. The leadership gap remained even when the environment changed, peace returned and normal activity started. It is this shortage of good leaders, role models, ideologues, intellectuals to guide the society which has created a space for all sorts of mavericks and pseudo God-man to take center stage.

Punjab is today known for the proliferation of personality based Deras (Religious sects) in all religions. Dera chiefs, who hold absolute authority in their Deras, are adept at influencing semi-literate, impressionable people with sweet words and a show of miracles. Many such Dera chiefs have been found to be indulging in criminal activities and are now imprisoned for the same.  With the space in the Sikh and Hindu communities quite filled up these elements have hit upon Christianity as the latest cash cow. It is not without reason that the Christian self-styled “Pastors and Apostles” in Punjab are all in the 30-40 age bracket.  The intention is to earn unimaginable wealth, boost  followership and trigger conversion to Christianity.

Sabu Mathai Kathettu, a Christian missionary has, in 2009, published a report that lays down a well planned methodology for conversion of Sikhs to Christianity . The main among many recommendations is the need to attract Sikhs of high caste into the fold of Christianity to gain better and faster results. The emphasis was recommended to be on propagating the Gospel in the Punjabi language and through Satsang type of congregations that the Sikhs are more comfortable with. When seen in this context, the proliferation of informal God-men and Christian Dera chiefs starts making sense.  The conversion process needs to be looked upon with utmost seriousness. Any religious activity that is based on exploitation needs to be stopped.