You are here: Home / Areas of Study / Governance & Politics / Explained: Why organic matter in soil is crucial for a state like Punjab
Share

In the past five decades, the state had achieved several firsts in the field of agriculture and even became the first state in the country to install soil fertility map in each village to improve soil health. But the soil of Punjab has always been an issue of debate because the state is not only the highest consumer of chemical fertilisers per hectare in the country, but also the third highest pesticide consumer while accounting for just 1.53 per cent of the total area of the country.

Indian-American soil scientist Dr Rattan Lal, an alumnus of Punjab Agriculture University (PAU), Ludhiana, who recently received the prestigious World Food Prize, said that in Punjab, Haryana and Uttar Pradesh soils are degraded and depleted because ‘organic matter’ is quite below (.5-.2 per cent). The Indian Express explains how organic matter in soil is an important issue for Punjab.

What is organic matter and why it is required in the soil?

Organic matter is the very foundation of good soil health. It consists of plants, animal material which gets converted into humus after decomposing. According to the agriculture department, it improves soil quality and fertility. Organic matter can even improve the fertility of sandy soils. It supplies nutrients, increases water-holding capacity, prevents soil erosion. Supplication of organic matter into the soil decreases with frequent tilling of the land.

In Punjab, farmers usually plant three crops a year which means the land gets disturbed every time they till, leading to a decrease in organic matter in the soil. “Soil having good amount of organic matter has great water holding capacity which in turn needs lesser irrigation and even helps arrest floods by alloying increased infiltration into the soil,” said Joint Director (Fertilisers), Agriculture department, Jagtar Singh Brar.

What is the ideal organic matter content in soil?

‘Organic matter’ content in the soil of the state is way below what it needs to be so as to call the soil healthy. While PAU said that .75 per cent organic matter in the soil is sufficient, Punjab agriculture department said it should be at least 1 per cent. International standards suggest having around 2-3 per cent in the soil.

Dr Lal, who received an award for his work helping millions of farmers improve their soil health, had opined in his published interviews that organic matter should be around 2-3 per cent.

How much organic matter is present in the soil of Punjab and has it increased over the years?

“Punjab’s soil falls in the ‘medium’ category as for as availability of OM is concerned,” said Dr O P Choudhary, principal soil chemist and head of the department of soil scienceat PAU. He added, “In Punjab, 54.7 per cent land has medium organic carbon in the soil between .40 and .75 per cent, while 31.4 per cent of the land witnesses low OM below .40 per cent and only 13.9 per cent land witnesses high .75 per cent and above organic matter, which means on an average our soil had witnessed .51 per cent organic matter in this decade from 2011 to 2020.” 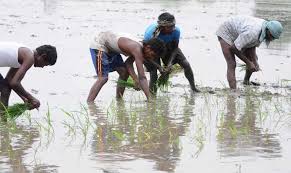 How much time does it take to increase organic matter in the soil?

With the collective efforts of Punjab government, experts and farmers, it can be increased up to .50-1 per cent in a decade’s time, even though the increase was between .3 and .11 per cent in the past five decades. “We at PAU had done experiments in our fields where we had incorporate wheat and paddy residue in the fields and had also done green manuring, as a result of which the organic matter has increased from .42 per cent a decade back to .67 per cent now in our fields,” said Dr Choudhary, adding that they had increased it by .25 per cent in a decade and the same can be replicated across Punjab.

What steps can be taken to increase organic matter in soil in Punjab, when most farmers sow three crops a year?

By tilling the land again and again, organic matter gets disturbed and decreases. Experts advised farmers to opt for two crops a year and grow green manure as a third crop, which is ploughed into the field only to improve soil fertility. The best time to grow it is after wheat harvesting in April, and then ploughing it in the fields before paddy sowing in June. Putting cow dung in the fields, incorporating paddy and wheat stubble in soil, growing pulses like summer moong are methods to enhance it.

“When majority farmers are sowing three crops a year and fields are not free to grow green manure, incorporation of wheat and paddy stubble is the best way to enhance organic matter,” said Director, Punjab Agriculture Department, Dr Sutantra Airi, adding that with incorporating crop residue in fields, usage of fertilizers would also decrease and land would become healthy.

Why is increasing organic matter important for Punjab?

When Punjab has already witnessed high productivity in several crops, enhancing this further with existing land holdings is possible when soil is enriched. For instance, paddy productivity in Punjab varies between 4.9 tonnes to 7.4 tonnes per hectare and wheat production is between 3.8 tonnes to 5.7 tonnes per hectare. If organic matter in the soil is enhanced to the desired level, the fertility of the soil of low production areas can be enhanced manifold to bring it at par with soil giving the highest production in the state. Fertility of soil with high productivity can also be enhanced further by increasing organic matter to around 1 per cent, said experts.

“For example, if we have hybrid seeds of any crop with the capacity of giving 50 quintals of yield per acre, we also need quality soil with required OM to get that yield, otherwise farmers may end up getting a much lower yield than the claimed 50 quintals,” said Madan Lal Khurana, soil expert and retired deputy director of Agriculture Soil Testing Karnal (Haryana).