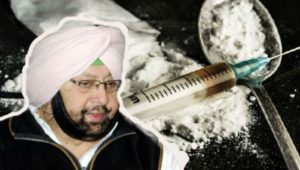 Punjab has been facing a serious challenge from drug menace for quite some time now. During the election campaign in 2017, Captain Amarinder Singh, then President of the Punjab Pradesh Congress Committee, had given a solemn promise to eradicate the menace from its very roots. He went on to become chief minister of the state; sadly, the menace has not only persisted but also increased in intensity over the four and a half years of his rule and now the state is poised for the next round of elections. He has failed to keep his word. The end result is terrible suffering of the people of Punjab.

Assam is also challenged by a similar problem; the BJP election manifesto flagged fighting drug proliferation as one of its key result areas. Now the BJP government is in place and the fight against drugs has commenced in right earnest. The Chief Minister of Assam, Himanta Biswa Sarma, has converted the fight against drugs into a personal crusade and has, in the process, won the hearts of millions of aggrieved parents in the state.

The steps that he is taking are bold and innovative. There are reports of his having personally burnt a consignment of illegal drugs worth amount about Rs 170 crore in Hojai, in the presence of the general public and key members of the Karbi Anglong Autonomous Council. That day he wrote with the joy of triumph on his Twitter handle “The Last Rites of Drugs in Assam.” Within days of his first action, the chief minister drove a bulldozer over huge piles of seized narcotics in Nagaon on 18 July. He reiterated that his government has zero-tolerance against the addictive substances that have weakened the “vitality” of the youth in the state.

Such actions by the Chief Minister have left no doubt about his personal commitment to the cause and his resolve to lead from the front in challenging the menace. They have galvanised the state apparatus to the extent that now the state intelligence, Police and bureaucracy are working in tandem to fulfill the tryst of the chief minister.  In the short time that he has been on the chair, more than 1500 drug dealers and peddlers have been arrested which has led to a literal breakdown of the drug links and organisations. 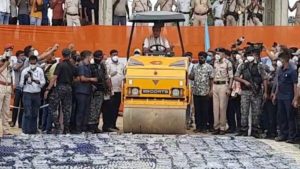 Punjab, on the other hand,  has become the centre for all types of drugs. The availability includes large quantities of heroin, poppy husk, all types of addictive pills/capsules, Ganja, Charas and of course the ever popular “Chittha.”

The chief minister of Punjab has often spoken of a nexus between smugglers, gangsters and terrorists aimed at promoting narco-terrorism in the state with the raw material coming in from Pakistan. Undoubtedly, there are drug seizures on ground and some arrests also, but strangely, despite having this information the state has been unable to arrest a single kingpin or a drug lord. It is reported that the kingpins have political connections or are politicians themselves for which reason they are not being targeted by the police. It is no wonder then that the drug organisations remain intact despite arrests being made at the lower level. Under such circumstances where the top remains free, there can be no hope of controlling the drug menace and Punjab will continue to suffer.

The state is also short of de-addiction centres, This apart, many families are shy of using the facilities (however meager they may be) due to fear of social ostracism. The need of the hour is a focused information campaign at the state level to create awareness and to help those who are suffering from the menace, no visible effort has been made in this direction even as there is a lot of talk about the same.

The chief minister of Punjab is quick in asking for a national drug policy while he underlines the need for more synergy between the anti-drug special task force, sadly, within his own state he is not being able to generate the will to tackle the serious matter head on.

The situation is very critical since every day an increase in the number of drug addicts is being recorded. According to data shared by the government the number of persons seeking treatment has increased from a little more than two lakhs to more than six lakhs.  Add to this the bigger number of who are not registering for treatment and we have a virtual epidemic in our hands.

The chief minister of Punjab should take affirmative action, as is being done by his counterpart in Assam and address the drug problem with earnestness and honesty. Success in this initiative will somehow mitigate the many “acts of omission” that his government is mired with and in his imminent retirement he will have the satisfaction of having put in a  sincere effort towards fulfilling the promise that he made to the people.

Action against drug dealers has a bigger social than political connotation since drugs weaken the very foundation of a society as is happening in Punjab. Addiction in the state has reached critical proportions while successive government have not been able to do anything more than giving lip service. A lot was expected from the Captain Amarinder Singh led  government but it has failed to deliver, there is still time for him to redeem himself, he simply has to take a leaf from the actions taken by his counterpart in Assam.