You are here: Home / Areas of Study / Social & Cultural Studies / Flawed ideology & inherent contradictions of “Sikhs for Justice” has no takers in Punjab
Share 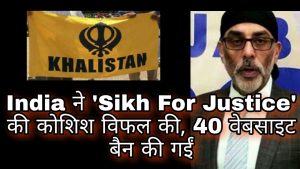 Sikhs For Justice (SFJ) is a  maverick US based organisation whose stated objective is to carve out Punjab as an independent Nation from within the Indian Union.  On July, 04, in a most detestable and disgusting act, the organisation launched a website, ww.punjabfree.ru, through a Russian portal. The website states that ‘indigenous’ people of Punjab, irrespective of the religion that they belong to and living anywhere in the world, can register themselves for ‘Punjab Referendum 2020,’ and avail an opportunity to vote on their future political status as an independent nation.

On 20 September, 2019 the Government had declared SFJ an unlawful association under Sub-Section (1) and (3) of Section 3 of Unlawful Activities (Prevention) Act (UAPA), 1967. On July, 01, the Government went a step further and declared Gurpatwant Singh Pannu, the prime mover and legal advisor of SFJ, an ‘individual terrorist’ under the fourth schedule of UAPA, 1967. He is charged with making an attempt to revive militancy in Punjab through anti-national activities and involvement in the Khalistan movement.

As www.punjabfree.ru got activated the Government banned 40 websites linked to SFJ. “On recommendations of MHA, MeitY, has issued orders under Section 69A of the I.T. Act, 2000, for blocking 40 websites of SFJ,” stated a Union Ministry of Home Affairs (MHA) order on the subject. The Punjab and Haryana High Court has, while disposing a Public Interest Litigation seeking steps against SFJ, directed “necessary action” by the authorities concerned. The State of Punjab told the High Court that 16 FIRs had been registered against the organisation and 116 WhatsApp groups related to the organisation have been blocked.

Such is the abhorrence for SFJ in Punjab that, in an animating and unusual situation, all opposition parties fully supported the decisions of the central Government to ban the organisation, designate Pannu an individual terrorist and block its communication tools.

“Referendum 2020 was just a drama by those who hate India,” said Sukhbir Badal, chief of the Shromani Akali Dal (SAD).

In the year 2007, Gurpatwant Singh Pannu, a New York based attorney who provided legal services to asylum seekers in the US established the SFJ with his brother Avtar Singh as the President. he set an absurd narrative of separating Punjab from the Indian Union, the largest democracy in the world.

It is difficult to clearly substantiate whether ISI was the mastermind of the plan or became a part of it later. What is certain is that, as the activities of the group gained momentum, the signature of ISI became more visible. SFJ websites, www.sikhsforjustics.org and www.2020referendum.org, shared domains and sourced content from a Karachi-based website http://snip.pk. The personal websites of several SFJ activists, including that of Gurpatwant Singh Pannu, were linked to the same Pakistani website. 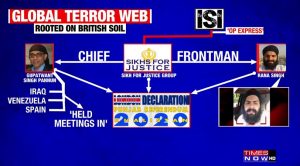 Links between SFJ and ISI

The organisation could only negligible numbers of  supporters from the Sikh community and, as such, existed in isolation for many years. It then hit upon the idea of leveraging online means to grow further and thus was initiated the concept of “Punjab Referendum 2020.” On Sunday, 12 August 2018, a handful of Sikh Diaspora campaigners assembled at London’s Trafalgar Square to unveil plans for the referendum.

Flush with funds from the ISI, the organisation went ahead with all kinds of anti-national activities and especially provoked the Sikh youth, to declare a war against India. It roped in many journalists to speak about its evil cause. It used social media optimally for its propaganda. The Indian media needs to be credited for not having fallen to the bait. Gurpatwant Pannu and SFJ faced strong criticism and ridicule by Indian media across the board.

In the meantime, ISI attempted to increase proliferation of drugs, arms and terrorism in Punjab. An investigation, by the Punjab Police, of SFJ involvement established that the organisation assisted ISI in the conduct of such subversive activities. A special effort was made to use the Kartarpur corridor as a conduit for all nefarious activities. However, alert intelligence agencies in Punjab as well as the NIA, RAW etc. did not allow fructification of the designs.

Interestingly, Pannu is not ready to associate with the indigenous  separatist elements of Punjab. He projects himself as the sole messiah of evil separatism and says that the Khalistan movement has commenced on July, 04, 2020; he avoids queries about its successful culmination by saying that he is not an astrologer. This posture is causing resentment among those like Simranjit Mann who look upon the movement as their own brainchild nurtured over many years. Pannu prefers the individual path, probably due to financial considerations. With time he will declare the referendum as successful and then approach the UNO with a request for intervention. No such intervention is feasible but for him the pot will keep boiling and the money will keep coming in.

Punjabis will never accept any movement that seeks to separate them from the Indian Union. For them there can never be a repeat of 1947. Many like Simranjit Singh Mann and his political party Shromani Akali Dal (Amritsar) have fought elections on the grounds of separatism and have been consistently rejected by the people.

The young Punjabis are too engrossed in their aspirations to be pulled into the murky waters of secessionism and separatism. Among the third- and fourth-generation Sikh Diaspora as well, there is hardly any attraction towards the calls for Khalistan. In fact, selection of the word “Khalistan” which has a distinct Muslim connotation is quire repulsive and objectionable to the Sikhs.

Due to the firm and timely action taken by the Government and support given by all political parties as well as the people of Punjab the “Punjab Referendum 2020” has been reduced to an exercise in futility. Now, SFJ, under extreme pressure from the Indian media and intellectuals has said that the referendum is unofficial in nature and, as such, not legally binding.

It is because of its flawed ideology and inherent contradiction that the SFJ movement has found no takers in Punjab. Its obnoxious tilt towards Pakistan has further exposed it as a stooge of the ISI with financial gain as the only objective. It is, therefore, no wonder then that the appeal to clip the wings of SFJ gained a universal political signature in Punjab.