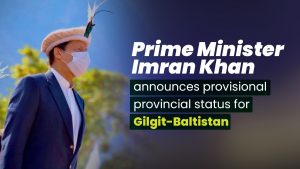 Pakistan Prime Minister Imran Khan has, on November, 01, announced that his government would give “provisional provincial status” to its occupied territory of Gilgit-Baltistan. Gilgit-Baltistan was a part of the pre-Independence princely state of Jammu and Kashmir. It became a part of India on the basis of the legal accession of the state  to the country in October 1947 and is internationally accepted to be under forcible occupation of Pakistan. Hence, the action proposed to be taken by Imran Khan is illegal under international law and India has, very rightly, protested the same.  The Indian Ministry of External Affairs (MEA) has stated that India “firmly rejects” the attempt by Pakistan to bring “material changes” to a “part of Indian territory, under its illegal and forcible occupation.” “Any action by Pakistan to alter the status of the militarily-occupied so-called ‘Gilgit-Baltistan’ has no legal basis whatsoever and is totally void ab-initio,” said Anurag Srivastava, spokesperson of MEA.

The attitude of the Pakistani federal  government, regardless of the party in power, has always been perfidious and double dealing so far as Gilgit-Baltistan is concerned. This deceit and treachery goes back to the times when the region was called Northern Areas and was plundered by the federal government with impunity due to its ambiguous political status.  In continuation of the exploitative practices, the region was, in 2009, renamed Gilgit-Baltistan through the Gilgit-Baltistan (Empowerment and Self Governance) Order, 2009 which replaced the Northern Areas Legislative Council (NALC) with a Legislative Assembly. The NALC was an elected body, but had no more than an advisory role to the Ministry for Kashmir Affairs and Northern Areas, who ruled Gilgit-Baltistan from Islamabad.  The order of 2009 had no legal sanctity since it did not emanate from the federal National Assembly and the Senate. It was merely an executive directive signed by the oppressive Ministry of Kashmir Affairs & Northern Areas. On ground, no worthwhile power has been vested upon the assembly constituents.

It is notable here that in the run up to the sham Gilgit-Baltistan Assembly election of 2015, then Prime Minister Nawaz Sharif had also prevailed over the Gilgit-Baltistan Supreme Appellate Court Bar Association to issue a demand for grant of a “Provisional Province of Pakistan” status which was strongly opposed by the people. Now that the next election for the sham Assembly have been announced to be held in mid-November the same shameless charade is being played out by the Imran Khan led government.

This matter has been on the discussion table for quite some time in Pakistan. Pakistan’s Dawn newspaper reported in September that the government and the opposition had “almost reached a consensus” on granting ‘provisional provincial status’ to the region. Imran Khan could not have called for such a consensus without the explicit approval of his boss, General Qamar Bajwa, second term chief of the Pakistan Army. It is also reported that Gen. Bajwa met all the key opposition parties in September to explain what was coming.

The fact that such an order has emanated from Gen. Bajwa at a time when the army has taken over the China Pakistan Economic Corridor (CPEC) gives an indication of the Chinese influence in the political drama that is being played out. It is no  secret that China has been demanding a provincial status for Gilgit-Baltistan for long in order to safeguard its assets being created for CPEC. It, therefore, has become imperative for Bajwa to assuage Chinese concerns about the safety of the massive $60 billion investment. 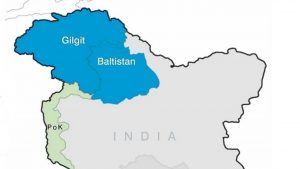 Pakistani propaganda machinery has been attempting to equate the proposed move with the change in status of Jammu and Kashmir brought about by the Indian Government in August, 2019. This is a falsity since the Government of India amended the Indian Constitution while Article 257 of the Pakistan’s Constitution lays down that the country cannot change the status of the region without the wishes of the people.

By proposing to make GIlgit-Baltistan a province Pakistan is acknowledging that the August, 05, change of status of Jammu and Kashmir carried out by India will no longer be contested by the country. In other words, Pakistan is all set to abandon the so-called “cause of Kashmir” that it has been fraudulently espousing for so many decades. Its double dealing is becoming quite apparent. It is not without reason that Hurriyat Conference leaders are speaking openly against the proposal. Sayyid Abdullah Gillani, the Pakistan Occupied Kashmir (POK) based so-called special representative of Syed Ali Shah Geelani has reportedly termed that step as one that is, “laden with disastrous consequences.” POK President, Sardar Masood Khan, has also opposed the move.

Pakistan is further trying to further justify the move by projecting it through the media as a policy shift that could secures vital Geo-strategic, economic, and energy interests while strengthening Pakistan’s Kashmir stance at the United Nations. Even a cursory look at the economic condition of all provinces in Pakistan other than Punjab would show the inherent contradictions in the “economic development” argument. So far as the United Nations is concerned, there is no talk of the issue over there anymore. Hence, the arguments being given by Pakistan in support of the move fall flat.

India is determined to get back the occupied territories of Jammu and Kashmir from Pakistan and fulfill the unfinished agenda of the partition. Indian Government and Indian Army have strongly reiterated that the nation is prepared for a two front war, should that be imposed by the devious enemies.  Attempting to make Gilgit-Baltistan the 5th Province of Pakistan will be yet another blunder committed by Imran Khan as prime minister of his country. Whatever perfidy Imran Khan and his ilk may attempt they cannot keep the people of Gilgit-Baltistan oppressed for long. The people will soon enjoy the fruits of freedom and democracy as a part of their own country – India.

(Jaibans Singh is a geo-strategic analyst, writer and commentator)