You are here: Home / Areas of Study / International Perspectives / Infringement of human rights through state sponsored violence in Balochistan
Share 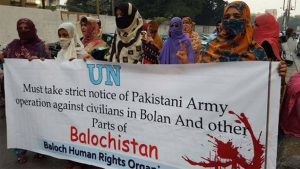 On 01 June 2021, Pakistani Prime Minister Imran Khan made a rare visit to Balochistan, a province that has been in the throes of a separatist insurgency ever since the creation of the country. The visit had a distinct political hue with the PM making all the right noises about development and federal assistance. By doing so he only rubbed salt on the festering wounds of the brutalised people.

The prime minister, most obnoxiously, expressed grief over the killing of some Frontier Corps personnel in an encounter a few days earlier. He had nothing to say about the atrocities being committed by these very personnel in the form of forced abductions, torture and killing of innocents (often children) in custody and the unfettered molestation/rape of the Baloch women. These crimes against humanity perpetrated upon the people have been reported extensively by the Baloch Diaspora in the international circuit; proof has been uploaded in social media. Yet, the Pakistani leadership has remained oblivious to the suffering of the people. Instead, the prime minister had the gall to state that the federal government is spending a lot for the development of the region. There is, however, nothing to show so far as the so-called development is concerned; all over there is suppression, poverty and deprivation.

It would be pertinent to remind Prime Minister Imran Khan that this month of June also marks the twelfth year since the abduction and disappearance of Dr. Deen Mohammad Baloch on the night of 28 June, 2009. His daughters, Sammi and Mehlab Baloch have been sitting on a hunger strike at the Karachi Press Club, demanding the safe release of their father ever since. They have appealed to every court in Pakistan but to no avail. Prime Minister Imran Khan conveniently brushes aside such stories and incidents while spouting his deceitful lies.

According to statistics given by the Baloch Diaspora in exile to the United Nations and to many international human rights organisations, more than 40,000 political and social activists have been abducted in Baluchistan and thousands have been extra-judicially killed in the last two decades. Successive federal governments have remained silent spectators to this gross human right violation.

A few days back, around 15, June, there was news about a teenager named Gowahram Baloch being abducted by the Pakistan army from District Kech. Later, his body was found with bullet wounds and extreme torture marks. The Pakistan Army simply called the parents of the child and told them that their son had died; even post mortem was not allowed to be conducted. This happened within two weeks of the address by the prime minister to the people whereby he gave an assurance that they will be protected at all cost. Such is the pall of fear in the people that there was no call for an inquiry and no public outcry for justice.

The condition of women in Balochistan is so fragile that senior politicians have no compunction in openly exploiting them. On June 23, an NGO complained that a 50 year old political leader, Maulana Salahuddin Ayubi, who is a Member of National Assembly (MNA), had married a fourteen year old girl. The date of birth of the girl was recorded as October 28, 2006 in her school documents and was given as evidence in the complaint. The authorities have been forced to launch an investigation; however, what is bone-chilling here is the gross disregard for rights and social norms that the powerful have adopted in the region. One shudders to think as to how many such girls have been exploited and their lives ruined in earlier instances.

Dissent in Baluchistan due to this colonisation by both Pakistan and China is increasing by the day. It has led to a massive revolt which, in turn, has led to intensified attacks and repression by the Pakistan army on civilians. The freedom fighters of Baluchistan are not ready to give up on their commitment to save their homeland. Dr. Allah Nasar Baloch, a well known freedom fighter has recently raised the issue of the Chinese occupation of the Gawadar port. “If Balochistan is our body then the coast and Gawadar post is its soul” he tweeted recently in his native language.  The tweet is a clear indication of the sentiments of the Baloch people which politicians like Imran Khan are trying to brush under the carpet with their doublespeak.

Such is the condition in Baluchistan that even the Supreme Court of Pakistan has acknowledged the perpetration of human rights abuses and extra-judicial killings in the region by the premier intelligence agencies of Pakistan.

It is time for the international community to seriously acknowledge the Baloch struggle as a righteous outcome of state repression by an insolent federal regime. Appeasing the repressive policies of the Punjabi Muslim dominated political elite of Islamabad is not in order. The United Nations must compel Pakistan to comply with all conventions on forced disappearances and torture instead of accepting its brazen lies. By staying quiet, it is only encouraging the level of atrocities being perpetrated on innocent civilians. India must take a lead in this fight against infringement of human rights and state sponsored violence in Balochistan.

(Jasbir Sarai is an Army veteran, analyst and columnist)