You are here: Home / Areas of Study / International Perspectives / Israel and Gaza: The never ending story of violence
Share 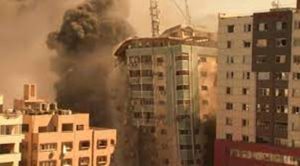 East Jerusalem has once again emerged as the flash point between Palestine and Israel.  Israeli security forces tried to move out Palestinian Arab worshippers supported by HAMAS (Harakat al Mukwana al Islamiya), from the Al Aqsa Mosque complex after Ramadan prayers as per schedule on 10 May 2021. The Palestinians resisted and approximately 250 Palestinians and some Israeli troops were injured in the clash.

Palestine President Mahmoud Abbas has confirmed 337 fatal casualties, 1000 wounded and mass destruction of buildings including the Al Jazeera broadcasting station. Israeli Defence Minister Benny Gantz has ordered mobilisation of additional three special force brigades and an armoured brigade to launch an offensive in Gaza. Israel PM has declared that top militant leadership of HAMAS has already been neutralised. HAMAS spokesman, Abu Ubaida, has claimed that they have fired 1100 plus Qassam rockets on Israeli towns and will continue the freedom struggle.

Israel, the only Jewish nation in world, has a history dating back to the pre-biblical era. The region, holy to all three Abrahamic religions, was part of mighty Roman Empire. Later, the area formed part of Byzantine Empire. The whole area was known as Palestine and remained under several Islamic dynasties. Finally, it was ruled by Ottoman Empire. After World War-1 it was placed under British mandate by the League of Nations.

Even before the mandate, a large number of Jews, with a desire for a separate Jewish homeland, immigrated to Palestine, the holy land. During World War 2, the holocaust perpetrated by Nazi Germany, caused mass immigration of Jews to this region, however it caused clashes with local Arab nomadic clans. The United Nations proposed to partition Palestine into two separate Jewish and Arab states on 29 November 1947 but the Arabs rejected the plan.  Finally, Israel achieved independence on May 14, 1948.

The new Jewish state was surrounded by hostile Arab neighbours. The first war on Israel started on 24 May 1948 .The joint armies of Egypt, Syria, Lebanon, Jordan, Iraq and local Palestine militants, invaded Israel. Ben Gurion was the PM and minister of defence. Immediate mobilisation not only saved Jerusalem but stalled the attack by the Arab legion. Israel won the war conclusively.

The second war was initiated by Israel on Egypt as it had signed a treaty with Czechoslovaks for Soviet Arms and nationalised the Suez Canal in July 1956. It is referred to as the Sinai Campaign again and was again fought under the leadership of Ben Gurion. Britain and France supported Israel in this campaign for vested interests. It was an all out victory. Israeli troops reached Suez Canal and also captured the West Bank and Golan heights.

Israel fought another war with Egypt and others in 1967 as President Abdul Naseer, who acquired massive military aid from Soviets wanted to teach a lesson to the Jews. Arabs were annihilated again in the six days war.

The Yom Kippur War was launched on 6 October, 1973, on the holiest day in the Jewish calendar by Joint forces of Syria and Egypt to win back lost territories. After initial setbacks, Israel fought back and regained all lost territories by 25 October 1973.

Later, to ensure tranquillity, the Camp David accord, a bilateral peace treaty was signed on 17 September 1978 between Israel PM Menachem Begin and Egyptian President Anwar Sadat. It was coordinated by President Jimmy Carter in the USA. 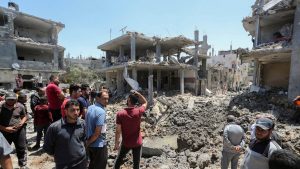 Once the interstate tensions culminated violence became the legacy of militant organisations; the Palestine Liberation Organisation (PLO) was responsible for several attacks on Israeli citizens. The most dastardly terrorist attack was carried out by PLO supported by the Black September group in 1972 Munich Olympics, killing Israeli Athletics team.

Despite all tensions and violence, Israel unilaterally decided to withdraw from the Gaza Strip in 2005. It was handed over to PLO and permitted partial self rule. The Jewish settlers left their homes and evacuated to the main land. Gradually, all elements of IDF also were withdrawn. This was a significant goodwill step towards providing autonomy to Palestinians. The whole world, including Arab fraternity, welcomed this peace move. Yasser Arafat the founder chairman of PLO ruled from 1969 to 2004 .Ramallah was declared as capital of Palestine and a legislative council was formed. The present crisis is linked to HAMAS. Raised in 1987, it is a Palestinian Sunni Islamic fundamentalist organization. HAMAS won the legislative election in 2006 and took over control of Gaza Strip after departure of IDF. This group has overshadowed PLO and taken over the role of continuing the struggle. The chief of Political Bureau is Ismail Haniyeh, the main spokesman is Fawzi Barhoum. Its main arsenal is Qassam I and Qassam 2 Rockets for attacking in-range Israeli towns. Israel has launched number of operations to neutralise this menace since 2008.

Operation Pillar of Defense was initiated in 2012, to eliminate Ahmed Jabari, the Hamas Chief of Staff. He was the mastermind of overseas relations, fund raising and weapon procurement and had directed a number of operations against Israeli citizens. On November 14, 2012, he was killed as his Silver KIA Jeep was hit by two missiles fired from a drone in Gaza city. The next day Israeli jets bombarded long range Fajar missile sites. HAMAS also retaliated with 1500 rockets but most of them were neutralised by an iron dome umbrella created by Israel.

Operation Protective Edge was launched in 2014 again against HAMAS as three young Israeli boys were kidnapped and killed by terrorists in the West Bank. Gaza celebrated the killings and launched missiles and rockets on Israeli settlements in nearby towns.  A new tunnel system was created by HAMAS to carry out killings in Israeli Kibbutz and vanish back. Israeli troops entered Gaza once again and destroyed 32 tunnels.

Now Operation Soumya is in progress. HAMAS has extended its operations from Lebanon and the Mediterranean Sea.  Armed Speed boats carried out raids on offshore platforms but were sunk by Israeli war ships. Israel will go full blast after HAMAS in what it terms as a conclusive engagement. Truce efforts by Egypt, Saudi Arabia, Qatar and United Nations have failed so far. US president has supported Israel’s right of self defence and despatched an envoy for negotiations. Russian President Valdimir Putin and UN Secretary General Antonio Guterres have appealed for end of hostilities. UN Security Council has been convened – but hostilities continue.

The never ending story of violence in Gaza and in Israel continues even after bloody rounds of 2008, 2012, 2014 and now 2021. Reconciliation does not seem to be possible any time soon. in the meantime, untold misery of the people is the order of the day.