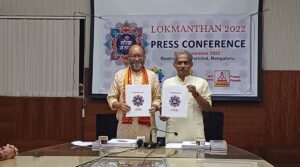 A national colloquium, Lokmanthan 2022, will be held from Wednesday in Assam as a response to “inimical forces projecting India’s cultural diversities as differences”, it was announced in Bengaluru on Monday.

“Multiple breaking India brigades are advocating sentiments like Free Northeast, Free Kashmir, Free Kerala, etc. Lokmanthan is an answer to such forces who are dividing the nation. Sanskriti is the basis of cultural unity although India has got contradictory traditions, customary practices and bewildering cultures. Lokmanthan also aims to bridge the gap between intellectual and cultural aspects of India,” said J Nandakumar, chief convener of the RSS-affiliated Prajna Pravah, which organises the colloquium.

Nandakumar, an RSS ideologue and author, responded to reporters’ questions about the “saffronisation” of education in BJP-ruled Karnataka. “It is very disheartening to see that a certain section of our very own academicians are opposing the Bharatiya way of education. When countries like China, Germany and others teach their students of their rich history and culture, what is wrong with India doing the same? We are already 75 years late by ignoring many scientific and scripture-based learnings from our Indian kings. It is up to the students to decide whether what they are being taught is right or wrong,” he said.

The four-day colloquium will celebrate the “loksanskriti” of the Northeast India along with representations of other states, according to Prajna Pravah, which says it welcomes all ethnic groups and communities to bring forth their traditional knowledge embedded in their cultural practices.

On Thursday, Lokmanthan will host northeastern cultural performances such as Sattriya Dance from Assam, Gayan Bayan from Assam, Singi Chaam from Arunachal Pradesh, Thang Ta from Manipur. In addition, there will be performances of Yakshagana and Jogati, a dance form popular in Karnataka. The colloquium will also include various sessions of “integrating lokparampara in faith, science, genealogy writing, agriculture, food, education, story telling, music, art and environment”.

According to the organisers, around 3,200 participants have registered for the event to be held at Srimanta Sankaradeva Kalakshetra.