You are here: Home / Areas of Study / National Perspectives / J&K: Constitutional changes were for the better
Share 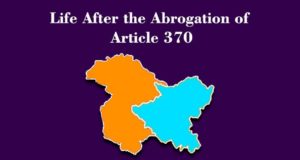 On 05 August, 2019, the Parliament of India through a valid constitutional process abrogated the draconian Article 370 and Article 35A of the Constitution that had, since independence, created roadblocks in the seamless integration of the state of Jammu and Kashmir with the rest of India. Alongside, the parliament also bifurcated the state into two Union Territories (UT) of Jammu-Kashmir and Ladakh.

When the constitutional amendments were made, some elements from within and outside the state predicted widespread unrest and violence. Their predictions fell flat due to acceptance of the changes by the people quite happily. As it became apparent that the acceptance of the people was complete the restrictions imposed as a safety precaution were removed.  The state has witnessed a normal situation ever since.

The security situation in Jammu and Kashmir was well in control in 2019 when the constitutional amendments were promulgated, terrorism was contained due to the successful conduct of Operation All Out, internal security in terms of disruptions through stone pelting and lock out calls was also well controlled. This stable security condition was one big reason for the government to go ahead with the bold decision. Today the security situation is even better than the 2019 threshold; the era of stone pelting and disruption seems to be a thing of the past. A big blow to the cult of terrorism has been struck on July, 31 with the killing of dreaded terrorist Abu Saifullah aka Lamboo in an encounter. Saifullah was a resident of Pakistan’s Punjab province and belonged to the Jaish-e-Mohammed terror group; he was the key conspirator of the 2019 Pulwama terror attack that killed 40 CRPF Jawans.

On the social side the many segments of society like the West Pakistan refugees and the people of the Valmiki community who were being denied state citizenship under the restrictive Article 35A have since started receiving their Domicile certificates. The biggest beneficiaries are the women of the state who now have a right on their property even if they marry a person from outside the state.

100 central laws and nine constitutional amendments that the region was deprived of are now applicable in the UT. 55 social security schemes of the central government that were not valid in the state are now incorporated and running well.

On the political front a big achievement has been the successful conduct of the District Development Council (DDC) elections which were both fair and non-violent. The Panchayati Raj institution in the UT is now three tiered and very active on ground. To give it a boost the government has doubled the District’s budget which is now collectively touching Rs.12000 crores. Districts are now working on integrated plans drawn out by elected representatives. Panchayati Raj institutions are ensuring development in remote villages. MGNREGA and PMAY have gone online with Geo-tagging that has helped ensure timely disbursement of funds. At the state level new political set up’s like JK Apni Party (JKAP) are coming up to challenge the old guard. Such changes will be a breath of fresh air for the UT.

In a recent meeting with all parties of the UT the central Government has assured that elections will be held after the process of delimitation is completed. The Delimitation Commission recently visited the state which indicates that the task is being undertaken with urgency. 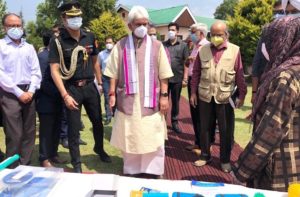 The UT has recorded a little more than 3 Lakh COVID cases with about 3300 deaths, a considerably low number when compared to the national state average. Apparently, the pandemic was dealt with well by the administration. The people too responded very positively and undertook prescribed precautions without complaint. This contributed tremendously in keeping the number of cases within manageable levels.

Those who got infected were given timely and professional treatment. To meet all contingencies, oxygen plants were flown in by the Indian Air Force from Germany and other places. Now every Panchayat has Oxygen supported beds and generation capacity of Oxygen stands at 60000 MPI. 99 percent above 45 persons and 40 percent 18-40 category persons have been vaccinated. This has been achieved despite the difficulty of vaccination in the remote areas, camps in such areas were organised with active support from the Indian army.

The biggest achievement by far is provision of transparent and corruption free governance. Technology is ensuring timely service to the people; digital applications have been created to speed up the issue of domicile certificates, caste certificates, pension, scholarship etc.

The Lieutenant Governor of the UT, Manoj Sinha is known to travel across the region by road, stopping at many villages to meet the people to get to know their problems. Quite obviously the officers also have to make a commensurate effort. The Lt. Governor also takes weekly reviews and holds meetings with 20 people per district (chosen randomly) to address their problems on the spot.

With peace being ushered in the region, development work has also gained momentum. Ever since the change in status, almost all Union Ministers have visited the UT and sanctioned projects. Languishing projects have been fast tracked; railway networks, roads and flyovers are being built. The UT is slated to have two AIIMS level hospitals, two more Government Medical Colleges and Hospitals at Kathua and Handwara respectively, two IT parks, two Central Universities, IITs and IIMCs. Some are already functional and consolidating their excellence. The centre has earmarked Rs. 20400 crore to give a boost to the new Industrial Policy. Land is being earmarked in almost all districts for setting up of industrial units.

Also of note is the Super 75 scholarship scheme to support education of meritorious girls from poor families, Tejasvani scheme for young women entrepreneurs between 18-35 years of age who will get up to 5 Lakh financial assistance under Mission Youth, PMJAY Sehat under which all citizens of JK will get health insurance cover of 5 Lakh under the Prime Minister Jan Arogya Yojana. There are so many more such people centric projects being introduced.

There is a long distance to be covered before the wounds of the people inflicted by unfettered foreign sponsored violence and political opportunism are filled. The silver lining is that a beginning has been made. It can be said with all responsibility that the constitutional change was for the better even as challenges persist.