You are here: Home / Icons of Punjab / Milkha Singh: The legendary and iconic flying Sikh
Share 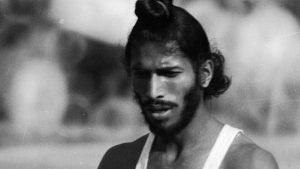 6 September 1960 was the day for which a young athlete named Milkha Singh had waited and sweated for a long time. On that day was scheduled the grand event of 400 metres finals at the Rome Olympics. Light breeze was blowing; Milkha was in the fifth lane of the track along with top athletes of the world. He could see Otis Davis (USA), Malcom Spence (South Africa), Carl Kauffman (Germany) and the others warming up. They then lined up in their respective lanes, Lane Judges and Timers were all set.

The gun fired at start point after the get set warning; Milkha had a perfect take-off and cruised full steam; he was in the lead but at 250 metres he got double minded. He thought, for a moment, that  he was pushing too hard and may collapse midway for which reason he slowed down a bit. As the runners reached the 300 metres mark, Otis and Kauffman had come parallel to Milkha. As the athletes neared the 350 metres mark with only 50 metres left for the race to finish Milkha realised that he would be crossed if he did not make an extra effort, he increased his pace and was set out ahead of his competitors. It was at this crucial stage that Milkha made the blunder of looking left and right to see how his competitors were doing. In that split second two runners crossed him.  Malcom from South Africa snatched the bronze. All four lead runners have broken the world record.

Milkha had the top seed in the event and was all set for Gold in the Olympics but destiny had something else in store. Malcom Spence clocked 45.5 seconds and earned Bronze Medal and Milkha had timed 45.6 seconds. Otis got the Gold and Carl Kauffman from German bagged the Silver. It was a total heart break for Milkha Singh. In his autobiography, ”Race of my Life” he writes, “The pain of 0.1 seconds of 1950 will end with my Life.” He finally bid farewell to this world on 18 June 2021 at PGIMI, Chandigarh, marking the end of an era.

Milkha Singh was born on 20th November 1932 in a Sikh family in village Govindpura, Muzzfargarh, now in Pakistan Punjab. His parents and other family members were massacred during partition in 1947, but he escaped to Delhi and was put up in a refugee camp at Purana Qila in a tent along with his brother-in-law and elder sister. They later shifted to a resettlement colony near Shahdara railway station. He joined the Indian Army Corps of Electrical and Mechanical Engineers (EME) as a recruit in 1951. On completion of his training he joined the Corps in 1953 as a tradesman.

His talent for running was discovered during his training period itself. Initially he was a long distance and cross country runner; in an inter services meet his training centre required a 400 meters sprinter and he was fielded. He not only won but was also selected for Nationals due to his excellent timing. In 1956, he represented India at the Melbourne Olympics, but he could not qualify for the finals. 1958 was a golden year for him as he won 200m and 400m gold medals at the National Games at Cuttack. Later, he won twin Gold Medals in 200m and 400m at the Asian Games in Tokyo. He defeated previous champion Abdul Khalik of Pakistan to win the 200m sprint. He also won a Gold Medal in 400m at the Commonwealth Games in Wales the same year. He was on top of the world and was awarded Padma Shri by the President of India in 1959 for his outstanding track performance. The Rome Olympics were a watershed in the life of Milkha Singh. He qualified for finals of 400m but could not win a medal although he broke the world record of 45.9 seconds.

After, Rome Olympics, Milkha went into his shell. He was promoted Naib Subedar in the Army as a special case. There were “Friendship Games” organised at Lahore, Pakistan in December 1960, Milkha was not willing to go to Pakistan due to gruesome memories of the massacre of his family but Prime Minister Jawahar Lal Nehru requested him to go and show them his worth. He finally agreed and once again he defeated the hero of Pakistan, Abdul Khaliq, in the 200m race at Gaadafi Stadium, Lahore. He shattered the image of the Pakistani champion. The stadium was packed to capacity for the race.

During the felicitations ceremony, President Field Marshal Ayub Khan said “Milkha Singh, you did not run on ground but flew like a Hawk. Pakistan bestows upon you the title of flying Sikh.” Milkha Singh visited his old village and was welcomed by his childhood friends. Later, it was recorded that the visit helped heal his old scars to some extent. To commemorate his wonderful victory in Pakistan, PM Nehru declared a one day holiday, as promised to Milkha Singh before he embarked for Pakistan. He continued his practice and later won 4 x 400 metre relay Gold at Jakarta Asian Games in 1962.

In 1963, Milkha got married to Nirmal Saini, a former captain of the Indian Volleyball team. The couple was blessed with one son and three daughters. His son, Jeev Milkha Singh has won several accolades as a professional golfer at the international level. 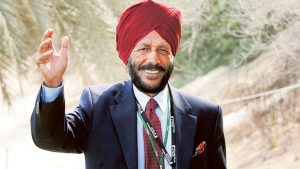 He participated in the Tokyo Olympics in 1964 but got no medals. He was awarded the rank of Honorary Captain in the Indian Army. Later, he was appointed as Director Sports by the Punjab Government and finally retired in 1998. His autobiography “Race of my Life“ which has been co-written by his daughter, Sonia Sanvalka, in 2013 is a best seller. Later, a famous Biopic was made by Farhan Akhtar which was an instant box office hit, apart from winning several National Awards.

In the final page of his Autobiography Milkha Singh writes, “Life as a sportsperson is hard, and there will certainly be times when you might be tempted to quit or take short cuts – but remember there are no shortcuts to success. At such times you should try and drive inspiration from this Urdu couplet – Mita de apni hasti ko agar koi martaba chahe, ki dana khak mai milkar gul-ae-gulzar hota hai.” The couplet can broadly be translated to English as – let your stature and ego be razed to the ground, for only when a seed becomes dust, and is buried, does it germinate into a new plant!

He remained fit and was ever smiling, always an inspiration for the younger lot of athletes and sports persons. In recent times, he was asked as to what medicine he takes on being unwell to which he replied that the track suit continued to be his panacea even at that advanced age. He and his wife contracted the deadly COVID virus; they fought valiantly but unfortunately succumbed to the disease within a week of each other. It is a great loss for the Nation and particularly for Punjab where he enjoyed an iconic and legendary stature.

Prime Minister Narendra Modi, in his message of condolence named him as a national hero and finest athlete India has ever produced. Olympian Gurbachan Randhawa called him a Tiger and said that he remembered him as a fellow Olympian of 1960 and 1964. World boxing champion Mary Kom remembered him as a legend. PT Usha, the sprint Queen of the country, while paying homage stated that his is a story of sheer determination and hard work which has inspired millions. The Indian cricket team paid homage to him at Hampshire before the beginning of the World Cricket Test Match finals; Virat Kohli said that he inspired the whole nation to aim for excellence and taught sportspersons to chase their dream relentlessly without any thought of giving up.

The legend of Captain Milkha Singh will be remembered forever and will motivate young athletes to work hard and play hard to earn an Olympic medal or create a World Record for the nation in their chosen sport. Success in sports will be the best tribute to the departed National icon. A statue of the legend should be installed in a National Stadium and a sports stadium for track and field events in his name should come up in his home town Chandigarh.