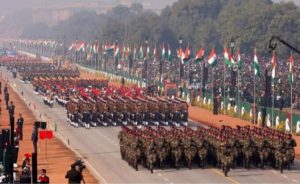 India will be celebrating 74th Army Day on January 15, 2022. Armed Forces are the last instrument of statecraft of any nation state; therefore they can’t afford to fail. It is this zero error professionalism that sets the military leaders as a class above the rest. Military leadership is significantly different from civil as the most obvious difference being the extremely high levels of competence and dedication required to achieve the objectives, even at the cost of supreme sacrifice.

In India, the Armed Forces have a great history of providing excellent and praiseworthy military  leadership.  The Royal Army  left behind a great legacy of socially deep-rooted and well established military  culture for Indian Armed Forces , when they left in 1947.  In recent times, the country has witnessed an unprecedented public debate over military leadership and the publically articulated concerns over the steady decline of the image of Armed Forces, as a preferred career option for the millenials.

The 21st Century brings in large amount of challenges for military leaders. The working environment within the Armed Forces is rapidly changing with paradigm changes in social value systems and technological advancements. The dynamic nature of modern warfare and expansion of national interests well beyond its frontiers have placed fresh challenges on leadership, in Armed Forces. Materialism and economic progress have exerted their own pressures on the moderately paid soldiers and officers, when they compare themselves with peer groups in corporate world. The swag of being elite class and privileged is slowly fading away. Intense media scrutiny has also resulted in many leadership aberrations being made in the public. Several  pay commissions have taken away the privileges and special status of soldiers, considering it as any other govt. job. All this leads to disillusionment amongst defence aspirants  and resultant poor turnout to join  the services.   Service to the Nation no longer motivates the youth to undergo a hard life as soldiering demands.

In the rapidly changing socio-economic environment in the country, the military leadership has to be transformed and matured to the next level of competence.  In particular,  emphasize should be on    opening of military organizations to their environments, maintaining a healthy civil military interface, with a more flexible and more vibrant structure of human resource management. The traditional methods of motivation no longer work and new dimensions need to be factored in our motivational modules. Some of the major challenges faced by military leadership on 74th Army Day, are discussed hereafter.

The society is undergoing a rapid  transformation on account of the high growth in economy and other related factors including proliferation of multiple social media platforms. This is leading to rising aspirations among the ranks. It also results in significant changes in the value systems and perceptions. The social differences between the officers and the men are constantly narrowing.  Military leadership need to be responsive to such changing environment. Given the higher levels of IQ, subordinates are likely to question the rationale behind decisions by the leaders.  This calls for improved transparency in functioning.  Decision making need to be made more inclusive to integrate all ranks in military matters. The ownership of decisions will generate a better response from the learned subordinates. Despite these social changes, the need for military leaders with strong fundamentals- character, integrity  and ethics will never change.

Change is the spice of life. Induction of women into Armed Forces is the new flavour of 21st Century, which has  brought in winds of change  in the male-dominated establishment.  In today’s times, girls are working shoulder to shoulder with boys in all vocations and rather excelling in their assignments. However, gender equality is still a major challenge in the male dominated defence services. The Supreme Court last year   granted permanent commission and promotions equal to their male counterparts, to all women officers. The entry of female cadets to NDA adds a new dimension of ‘co-ed’ to the training for combat.

The gender bias will slowly fade away, as we move further in this century. The implementation must be deliberate, progressive and adaptable to all ranks without sacrificing training standards.   There remain several gender-specific challenges in war and peace. Therefore, induction of lady officers into defence services and further into combat arms must be considered with deliberate thought and discussions.   Induction of women officers and their rise to ranks of commanding officers and beyond will harbinger a paradigm shift in military leadership styles. 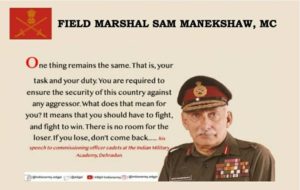 Politico-civil-military relationship in India has been a low point in the last 75 years.  In fact, much that is amiss in India’s national security framework today, could be attributed a civil–military relationship which has failed to grow and mature in step with the needs of modern-day security challenges. The resultant dissonance has severely impaired the national security discourse, adversely impacted not only the larger issues of war and peace but also the strategic decision-making process, nuclear strategy, war fighting capabilities, conventional operational readiness, long term defence & operational planning, procurement processes, morale  and human resource management, at large.

In the near future, senior leaders of Armed Forces will have to cope up with increasing political pressures.  Ambitious military leadership can be the bane of democracy, if being in the good books of the government of the day translates to becoming vulnerable to political manipulations.  There is, at times, an intense desire in many leaders whose ambition exceeds their ability to rise in rank by ‘hook or crook’, bringing issues of fair-play, ethics and values into the limelight. In the arena of national security, the consequences of moral failure can be grave.  So far, strict rules, a deep secular traditions and military ethos have acted as a deterrent to the politicization of  forces.

In the period between 2014 and 2020, supersession for appointments of Chiefs and new appointment of first CDS has happened. This led to senior officers, especially those seeking higher ranks like Army Commanders or Chiefs, seeking political patronage.  Unfortunately,  aspirations  rose among the  eligible Lt Generals that they can beat the seniority principle through political patronage.  This rat race politicizes the Army, which by far has remained praiseworthy apolitical and secular. Future military leaders will have to deal with such political pressures and stand tall for the national pride and for the welfare  of the men,  that they command.

Degradation of the value system in society as a whole has had a profound effect on the military leaders. Individualism, materialism, economic gains and ‘success at all costs’  are all traits embedded in the present day society. The individuals joining the service also come from same society and therefore, cannot totally escape from its effects.  The self-motivation levels of the officers have become abysmally low seeing the very rulers of the country indulging in all sorts of corruption and malpractices.

Military leadership demands the highest level of ethics and values to be able to lead in war.  The value system and its supporting ethos are the fundamental strength of the Armed Forces.     Secularism and inclusive character have been the defining virtues that have now become models in communal harmony for the civil society to emulate. It is only by adherence to these time tested ideals and principles that the services shall be able to retain the reputation they have traditionally enjoyed in the society.

The ongoing transformation process is ringing the alarm bells for the Military, which finds itself at the bottom of the priorities when bright young men and women choose their careers today. Once a coveted profession,  the Services today are no longer the desired destination. While this is true for the officers cadre, even  the recruitment patterns for the soldiers have undergone a marked change. While, there is no dearth of volunteers, today’s recruits are much better educated, aware and aspiring than their predecessors. Correspondingly, the service conditions and compensation in the Armed Forces have not improved to the level where a majority of these new-age competent entrants would feel fully satisfied.  . The traditional motivators in the Armed Forces have been adversely affected by certain socio-economic developments of the last two decades or so, making the motivational role of military leaders, so arduous.

India is  going through a transformation to claim its rightful place as super power in the present century. It is expected to play a strategic role not merely in Asia but also globally.  As the Indian Armed Forces chart their way through the 21st century, the victory in future battles will be largely dependent on the quality of astute leadership displayed by our armed forces senior leaders.  It’s a dynamic concept and it has to evolve with the changing circumstances.

The nation has full faith in the competence of our armed forces.   However, to keep this trust, the Armed Forces need to reinvent and constantly revise leadership practices that may have outlived their relevance. With the onerous responsibility of National Security, the Services must respond to the socio-economic challenges with élan and alacrity. In the changing kaleidoscope of 21st Century, reform and reinvention may well be the only options for the Armed Forces to retain their superlative standards of leadership at all times.

“Soldiering – A Class Above the Rest”