You are here: Home / Activities / Discussions / National Commission for Minorities: Round Table Conference on Punjab
Share 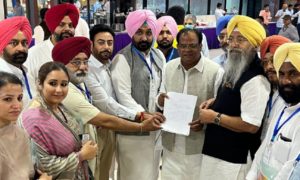 The Sikh delegation handing over memorandum to Shri John Barla

Conduct of the Conference

Issues Raised in the Conference

(a)  There is no truth in the perceptions that certain inimical forces are raising about a possible divide in the various communities of Punjab, especially the Sikhs who form the majority of the State and the Hindus who constitute the largest minority.

(b)  It was opined that certain inimical forces are spreading misinformation  in the state for political and strategic interests of self preservation. In order to maintain the age-old amity within all communities in Punjab there is a need to change this perception. The Minority Commission can assist in this regard by carrying out projects involving all communities.

(c)  The incumbent state government is failing to find its feet since it is unable to fulfill the election promises made by the Aam Aadmi Party. This apart, the lack of governance experience in the ruling dispensation is resulting in arbitrary decision-making that is harming the long term interests of the state. Under the circumstances, the people are looking at the Union Government for support to fast track development. In this it was felt that the Ministry of Minority Affairs can play a big role.

(d)  It is incumbent to hold SGPC elections in the state at the earliest since they are due since long. Also important is inclusion of “Nanak Leva and Sehajdhari Sikhs” in the election process since they too practice the Sikh religion in a devout manner.

(e)  An outreach in the rural areas is of great importance so that the farmers get integrated into the development policies being pursued by the Union Government, wherein, a lot of emphasis is on rural development.  The Ministry of Minority Affairs, therefore, should attempt to increase its presence in the rural areas of Punjab. There is a need to streamline the process of subsidy and enhance access to new technologies in farming where the Minority Commission can intervene with education and awareness packages.

(a)  Newsletters of the Minority Commission should be made readily available in the state, preferably in the Punjabi language.

(b)  The right message should be sent out to remove negativity and mistrust in the minds of the minorities filled in by some forces that are determined to undermine the nationalists thought process.

(c)  Training camps could be instituted at District level to create a pool of volunteers who can motivate people into availing the facilities being provided by the commission.

(d)  Offices of the Minority Commission need to be opened in Punjab, preferably up to the District level.

(e)  Extensive use of media with advertisements in newspapers and proactive social media interventions to be resorted to.

(f)  There is a specific need to educate the Panches and Sarpanches of the village about the excellent scholarship schemes that are run under the Minority Commission.

(a)  Giving his personal example Shri John Barla said that he had won his Lok Sabha seat with over 7 lakh votes and without spending any money. Less than one percent of the voters were Christians from his community. It happened because of the trust the people have in the “Sabka Saath, Sabka Vishwas, Sabka Vikas” policy of Prime Minister Narendra Modi.

(b)  Community awareness needs to be given top priority for which the civil society, like the gathered delegates of Punjab, would need to take responsibility. The Union Governments policies for development and prosperity need to be strengthened in Punjab to gain maximum advantage.

(c)  NGOs of Punjab should be made aware of the empanelment process.

(d)   Effort needs to be directed towards assisting Panchayats  in building of minority schools, community halls etc in the villages of Punjab through the minority commission

(e)  The official requirement is for projects to come through the state for which systems will need to be evolved.

(a)  The BJP has had a dynamic presence in Punjab since long. The party always strives to meet the genuine aspirations of the people and will continue to do so.

(b)  The party does not indulge in vote bank politics, it strivesto win hearts and minds as is seen by the personal interest being taken by Prime Minister Narendra Modi is community affairs.

(c)  The party cadre will take the message of development, peace and prosperity to the villages in coming times.

(a)  The perception that Punjab is a Khushal (prosperous ) state is a misnomer that should be countered.

(b)  The multiple issues of drugs, law and order, sub-standard education etc that plague Punjab are destroying the youth.

(c)  The proud Punjabi community does not need appeasement, it requires a helping hand which is looked upon as genuine.

(d)  The vibrant Punjabi Diaspora needs to be integrated into the development process.

(a)  Appreciation was expressed for the manner in which the Union Government, under personal guidance of Prime Minister Narendra Modi conducted ceremonies in honour of the 400th Prakash Purv (Birth Anniversary) of Guru Tegh Bahadur in Delhi, Haryana and Punjab.  Appreciation was also expressed for the active role that the Minority Commission, under guidance of S. Iqbal Singh Lalpura, played in the conduct of the celebrations for the 400th birth anniversary of Guru Tegh Bahadur.

(b)   A request was made for the Minority Commission to expedite work on the roads in Punjab that connect areas of religious importance. Especially mention in this was made to the Banga-Anandpur Sahib road and its extension right up to Naina Devi

(c)  A request was made for the early release of such Sikhs who were imprisoned during the times of militancy  and who have served more than their justified term of imprisonment with exemplary conduct and, They need to be released since they are now approaching old age and should be in the fold of their families.