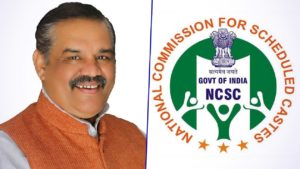 In a significant decision that would affect career prospects on many among the Scheduled Class category in Punjab, the National Commission for Scheduled Castes (NCSC) has directed the Government of Punjab to consider giving reservation in the promotion of judicial officers and other court employees belonging to the Scheduled Castes category.

While hearing a petition titled ‘Denial of reservation in promotion to Scheduled Caste employees in Courts in the State of Punjab’, in the presence of Central and Punjab government officials in New Delhi, Commission chairman Vijay Sampla asked the Punjab government to submit the progress report to the panel within the next two weeks. Punjab’s Special Secretary, Home Affairs and Justice, Baldeep Kaur was among the officers present.

The petitioner had informed the NCSC that vide the Punjab Scheduled Castes and Backward Classes (Reservation in Services) Act, 2006 the State Government is bound to give reservation in promotions to Group C and D but the provision has not been implemented by the Government in the case of Judicial Services and for other court employees.

NCSC Chairman, Vijay Sampla, on hearing the petition observed that the Supreme Court in “State of Bihar and another Vs Bal Mukund Saha and others (2000)” case had held that any office or establishment of the Judiciary of the State of Bihar concerned with appointments to public services and posts in connection with affairs of the Judiciary of the State of Bihar would fall within the sweep of the term ‘establishment.’ On similar lines, engagement of Judicial Officers and other court employees in various courts of Punjab must be in the ‘establishment’ category of the state government.

“After hearing the parties in detail, the Commission recommends that the Home Ministry of the Punjab Government will immediately move the file for implementation, in accordance with the reservation rules for the state. Progress made in the matter should be intimated to the Commission within two weeks,’ the NCSC chairman said.

The Commission also expressed its displeasure over the fact that no concrete action has been taken on the recommendations given by the Commission in its previous hearings even after the lapse of considerable time.