You are here: Home / Areas of Study / International Perspectives / Pakistan’s premiership will not be a cakewalk for Shehbaz Sharif
Share 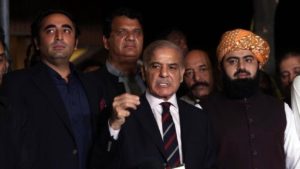 Pakistan has managed to keep alive its rather ignoble tradition of no prime minister completing his/her full term in office. Imran Khan almost reached there, only to be shunted out unceremoniously at the tail end. Let us briefly run over the drama that was played out to bring about the regime change.

Shehbaz Sharif  exhibited his astute political skills by managing to cobble up the opposition, some coalition partners in the Government and some members of the ruling Pakistan Tehreek-e-Insaaf (PTI)  party against Khan. The die was cast on 8 May with submission of a motion of no-confidence before the National Assembly Secretariat. Khan, with the help of  the Speaker, delayed the voting to gain time to convince some parliamentarians and members of his own party to relent.

The tactic did not work out and the matter came up for debate. Khan then played his trump card; before the voting, the Deputy Speaker of the National Assembly declared the motion as unconstitutional and part of a plot by “foreign powers” to interfere in Pakistan’s democracy.

Unwilling to relent, the opposition appealed in the Supreme Court which upheld the petition of the opposition and ordered voting on the no-confidence motion. Khan lost the vote and was compelled to step down. Shehbaz Sharif was elected to form the new government that will remain in place until elections that are due in August 2023 – yet another truncated tenure to add to the tradition.

Khan had been ushered into the prime ministerial chair in 2018 amid a lot of media hype and promises of a Naya (new) Pakistan. He also had support of the deep state (Pakistan army)  and its notorious intelligence agency the Inter Services Intelligence (ISI).

Once in the chair, Imran Khan hurtled from one crisis to another, the main being the terrible economic downturn; he blames the COVID pandemic but a more realistic assessment points towards an inability to widen the tax net, and more so, the ever increasing demand for funds by the Pakistan Army. The deteriorating law and order situation with unprecedented violence registered in Balochistan, Sind and even Khyber Pathkunkhwa was a second big factor. Khan also managed to ruffle the wings of the US and the west who played a major role in uniting the opposition. The final nail in the coffin was his fall out with Army Chief, General Qamar Bajwa.

The politically astute  Prime Minister Shehbaz Sharif has in his favour a reputation of being a good administrator who kept the Punjab Province stable and progressive through very challenging times. Unlike his brother Nawaz Sharif, he has good relations with the Army which is a prerequisite for any Pakistani premier. On the flip side for Sharif are the rumours of his corrupt practices that he refutes most vigorously as being politically motivated. 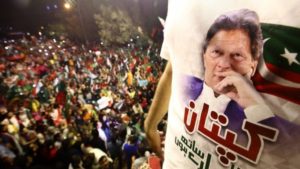 Rally in favour of Imran Khan

Shehbaz Sharif has to carry with him diverse political entities particularly the PPP. He also has to contend with the shadow of his big brother who may come back to Pakistan on a diplomatic visa. Undoubtedly, it is Nawaz Sharif who controls the party and the new premier cannot expect unhindered authority.

The army too will demand its piece of cake for installing him, as will the US and the west. Can he take a pro-west posture in the Russia-Ukraine war and annoy both China and Russia? Can he stay neutral? These factors will weigh on the mind of the premier even though the Pakistan Army has taken a U-turn and demanded that that the invasion be stopped immediately.

Runaway inflation has led to sharp rise in food prices and a free fall of the Pakistani currency against the dollar. The people are feeling very insecure and frustrated. Pakistan is burdened with a huge debt projected to be over $10; Imran Khan has spent the last year only in trying to find money to stay afloat. These factors pose a sensitive and potent challenge to the new Government. The premiership is definitely not going to be a cakewalk for Shehbaz Sharif.

So far as India is concerned, the silver lining is that the Pakistan Muslim League Nawaz (PMLN) has always rooted for peace with Nawaz Sharif having tried to walk the extra mile on a number of occasions, only to be scuttled by the Pakistan Army.

Prime Minister Narendra Modi set the ball rolling to build up a positive relationship with the new regime with his tweet, “Congratulations to H. E. Mian Muhammad Shehbaz Sharif on his election as the Prime Minister of Pakistan. India desires peace and stability in a region free of terror, so that we can focus on our development challenges and ensure the well-being and prosperity of our people.”

The peace message by Prime Minister Narendra Modi did not find resonance in a statement given by Lt. General Manjinder Singh, General Officer Commanding of the Nagrota based 16 Corps in a function at Rajouri. ” “Pakistan is still trying to disrupt peace in J&K and will activate its camps on their side of the LoC but we are on guard and we are working on it,” he said. It is the job of the army to stay vigilant and reiteration of this mandate to the media is not really required. Such statements make it difficult for the Pakistani political leadership to assert itself and should be avoided.

Shehbaz Sharif has said, “We want peace with India.” However, his second assertion that peace will not be possible  without a solution to the Kashmir issue puts a dampener on the entire process. It has to be remembered that even though Imran Khan spoke in a belligerent tone against India, peace has been witnessed along the line of control with the ceasefire holding for more than a year now.

Pakistan will witness political instability for a long time now which is likely to affect the entire South Asian region, particularly India. In the short term India would serve her interest best by playing by the ear and ensuring that there is no escalation in hostilities between the two countries.