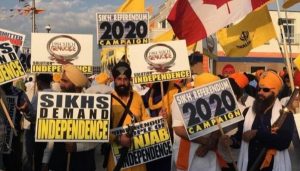 Is an “International Conspiracy” being hatched by vested foreign interests (not all foreign nations’) to plunge modern India into total anarchy and chaos with the end objective to disintegrate modern India?

Even a layman would be able to read the ongoing plans of international vested foreign interests –abetted particularly by China and Pakistan – and attempts to defame, destabilize and disintegrate modern India by resorting to irregular warfare.

Fact 1: Indian Express in its latest article on 09 February 2021 featured Indian-American banker Raj Sodhi-Layne and members of the Sikh community in California who aired the 30-second crowd funded advertisement to highlight farmers protest on CBS in Fresno County, right before the championship game of the NFL — the most-watched sporting event in the US that attracted 100.45 million viewers last year. They raised $852,000 to air the advertisement in all 43 major cities across the United States.

Fact 2: In a letter, Gurpatwant Pannu, SFJ’s chief, “gave a call to the Punjab farmers protesting on “Singhu” border to raise Khalistan flag at Red Fort on January 26 and receive a reward of USD 2.5 lakh.”

Fact 3: California Khalistanis hailed Actor-turned activist Deep Sidhu; broke Gandhi statue; distributed sweets to celebrate the hoisting of Nishan Sahib on Red Fort; proclaimed that the Sikh warriors will take over the (parliament) in Delhi; organized tractor rally in California in solidarity with protestors in India; and alleged making him a scapegoat as he was getting more popular than the farmer leaders and his arrest.

Fact 4: Mr. Dhaliwal, founder and director of strategy, a Vancouver-based digital branding creative agency called Skyrocket and co-founder of Poetic Justice Foundation, the organization that allegedly created the controversial ‘toolkit’ shared by Greta Thunberg on her Twitter account. One of the posts on Face book, Mr Dhaliwal wrote “I am a Khalistani. You might not know this about me. Why? Because Khalistan is an idea. Khalistan is a living, breathing movement.”

Fact 5: Mayors of New York, New Jersey and California, USA, have extended their support to farmer’s protests and urged President Jo Biden to intervene in the matter.

Fact 6: Canada remains the hub or epicenter of pro-Khalistan radical outfits with the USA following closely behind. They have close linkages with their counterparts in UK, Australia and other nations. Khalistani’s threaten pro-India elements in their countries. They display their clout in front of Indian Embassies and consulates besides desecrating Gandhi statues.

Fact 7: Earlier this week, High-profile Indian-origin Canadian Sikh minister Navdeep Bains, aggressive Khalistan sympathizer, resigned from his post and quit politics on ‘personal grounds’ surprising many in Canada. In reality, he was forced to resign on being exposed for massive corruption scandal. Bains has been groomed by the pro-Khalistan radical outfit World Sikh Organization (WSO), which is accused of radicalizing the Sikh community and making efforts to divide it. In fact, the Sikh Diaspora in Canada has them labeled WSO an extremist organization. 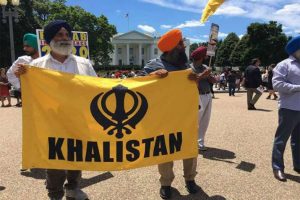 Fact 8: ISI created the Khalistan groups. It is giving full support, in the form of manpower and weapons. None other than Capt. Amarinder Singh, the Congress Party Chief Minister of Punjab, has stated that Pakistan is trying to infiltrate the borders. A disturbed Punjab suits Pakistan’s policies. He said there has been a spurt in “drone delivery” since the farmers’ agitation started and “weapons, money, and heroine” have been coming in. The Chief Minister said Pakistan has sleeper cells which they can activate and “a disturbed Punjab suits Pakistan’s policy”.”

Fact 11: Khalistan sleeper cells and its radical elements have made no bones about expressing solidarity with farmer’s protests and sharing the news. Leading the propaganda attack, SFJ made several posts on the issue and shared them through its social media accounts. While endorsing the news, Khalistan elements portrayed that the attack on the Red Fort was carried out by pro-India forces under the directions of Indian agencies to repress Khalistan voices. Subsequently, Khalistan outfits began aggressively demanding the Canada Government to stop the killing of Sikhs by Indian agencies and to avert Indian interference in Canada.

Fact 13: “Super Rich” luminaries like George Soros (protector of human rights around the world), Tom Steyer, Michael Bloomberg, Twitter, Face book, etc., are intelligent and use their wealth as a function of power to pursue their strategies to enrich themselves. Super-Rich Mega Donors invest to promote their business interests in their respective visions of the future with utter disregard to the national security interests of their own countries and adversarial nations. For, they care a damn about the vision of their own country, lineage, ideals, faith, or principles.

Fact 14: Mega-donors are available – dime a down. As per videos in public domain, the string shows how the threads from Rihanna and Meena Harris, sister of the American VP, lead to George Soros – How Soros’ hand seems to be behind the Delhi Insurrection. Add to them, investigative journalists like Barkha Dutt, Rajdeep Sardesai and many others competing with each other on pay-rolls of mega donors. In sum, Raj Sodhi-Layne, Rihana, Greta and their likes are on pay rolls of Super-Rich Mega Donors.

Fact 15: Not to be left out of consideration is Sam Pitroda, Chairman of Indian Overseas Congress with his 5 NGOs – The University of Trans-Disciplinary Health Sciences and Technology; The Global Knowledge Initiative (GKI); India Food Banking Network; People for Global Transformation; Action for India – have firm roots to pursue narratives to revive the Congress Party.

Conclusively, it proves the “International Conspiracy” theory to defame, destabilize and disintegrate India through psychological warfare. Yet another significant feature is the atrocious behavior of political leaders and parties, who are squarely responsible for colluding with international adversaries to spread and consolidate chaos and anarchy.

Indian political parties also have their counterparts in Indian Diaspora world over, who are equally adept at spinning global narratives best suited to their respective party interests with utter disregard to their fallout on social harmony, unity and national integration.

Let me highlight that without cooperation and collusion with internal radical elements, political parties and their leaders, it is not easy to spread venomous narratives through “Gas lighting”. Next, with elections in Punjab round the corner, political diatribe and vitriol between self-styled anarchist Finally, less said the better it is about the role of the mainstream media spreading social divide by recourse to raucous debates and cacophony. International conspiracy is an irrefutable fact.