Guru Nanak had witnessed the dissipative ways of ruling elite in contrasting lap of abundance and luxury, unmindful of their responsibilities towards the security of the country and well being of the people. It was in this kind of scenario, during the Guru’s stay at Kartarpur, that Babur had appeared on the Indian horizon as a powerful invader. 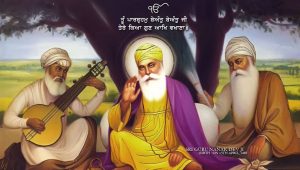 The Guru witnessed havoc that Babur’s troops unleashed, particularly on the women, who were carried away as war booty. He was deeply touched and penned four compositions, known as ‘Baburvani’ that reflect on the cataclysmic events from the perspective of divine play in an environment of human failings with its effects on society’s peace and harmony  – a scenario that likely can replay in conflict zones if no tangible steps get initiated to catalyze move towards peace.

The Baburvani texts remind us of the conflict types and the import of human response as Guru Nanak then divined by saying:

In the above text the Guru, invoking the divine attributes of the one shared Creator of all beings, relates two scenarios of conflict, seen by him not as diverse temporal manifestations but as the reflection of different facets of play of the divine will. One type of contest he mentions involves two powerful belligerent parties, and the other where a powerful party attacks and mauls a weak and defenseless opponent.

In a scenario where a powerful entity attacks another powerful entity, the Guru is saying:  Jae Sakathaa Sakathae Ko Maarae Thaa Man Ros N Hoee – a succinct yet telling comment on conflict between two Saktas , deemed invincible. Significantly this text is part of Rehao Pankti and thus could be interpreted as the more defining or central character of the societal conflict dynamic between two all powerful adversaries.

The key term Sakta is derived from Shakti literally meaning power. This term has been used by Guru Nanak for God in his Bani and therefore should not suggest judgmental connotation about any party. Within that frame, this typology could apply in two situations: one, at the micro level, when two well endowed Saktas contest within the course of a competitive setting. This situation is a common occurrence and invariably does not provoke Ros [resentment] to arise.

The other possibility in this category is the one using destructive means to force the opponent to submit to the more powerful contender. Limiting to confrontation using force to oust adversary community, the 1947 experience on both sides of the border in Punjab can be an example of this typology. It was a bitter fight to avenge the suffering of co-religionists on the other side but the Ros dissipated on both sides soon enough and has stayed that way.

The tensions between India and Pakistan, two nuclear armed adversarie,s seem to fit the Jae Saktaa Saktae Ko Maarae typology eminently but is the Ros absent here? On the surface if we go by the muscular assertions by the leadership on both sides and the frenzied media fights, the absence of Ros would seem a myth.

But it may not be that way since both the countries are still to heal from the trauma of 1947 partition, coalesce to a collective vision of national identity and pull the population together as cultured, aspiring, and optimistic and forward looking people and start nation building process in all earnestness. This quest has been getting hampered in both the countries by distracting and damaging effects of continuing conflict.

At the people level, therefore, while feelings for security of the nation retain paramount position, peace overtures by the leadership, too, are not decried by the public. Instead as we have seen there is groundswell of support for efforts at creating a thaw in the neighborly relations. These are pointers to the possibility that underlying the drumbeats of jingoistic slogans, there is a longing for the romanticized vision of togetherness associated with the composite culture of this region that can subsume Ros of the past memories.

On this hopeful note, we transit to the present and find that the Indo-Pak differences did not ever get close to any resolution. The tensions have been getting aggravated by multiple problems – the main being the Kashmir problem that has been triggering clashes between Indian and Pakistani forces at the LOC in J & K and at a few places across the international borders. Both countries have lived with closed and heavily guarded borders all these decades. Within the two countries, the narrative of tradition inspired invincibility has been conflated with nationalistic pride, which has made accommodation on ideological plane almost impossible.

This is worrisome because both the sides have nuclear arms and establishments that are deeply suspicious of the intent of each other. The Indo-Pak region thus is seen by some security experts as one of the most dangerous conflict zones in the world. Efforts by the UN have not been able to make any headway. Simla agreement did not help as most of the time, with unabated terror acts, India did not even agree to enter into a dialogue for peace.

Thus while peace has eluded, there is also realization on both sides that full-fledged war between the nuclear powered opponents could lead to massive destruction and yet not resolve differences that separate them. The choices therefore are stark.

This state of diminishing hope lies at the back of reasons that make symbolic initiatives like Kartarpur Corridor accord seem like a call from the beyond to the warring neighbors to cool tempers for their own good.

So one does wonder if it may be a play of divine will that in August 2018 during swearing in of Imran Khan, Pakistan Army Chief mentioned in conversation with Sidhu of their willingness to open the Dera Baba Nanak–Kartarpur corridor on 550th birth anniversary of Guru Nanak. The rest is history as all the negatives kept getting out of the way and the Corridor was inaugurated on 9 November 2019, by Prime Ministers of India and Pakistan on their respective sides to the wonder of a still skeptical global community.