You are here: Home / Agriculture / Repeal of Farm Bills – Was the U-Turn indispensable?
Share 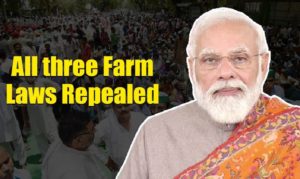 Prime Minister Narendra Modi’s decision to repeal the farm bills is an important chapter in India’s political history. I stand behind his decision and give him credit for listening to people’s voices and upholding  democracy. Modi said that his government has been working sincerely, with this sense of service, to make people’s lives better. In a statesman like gesture he apologised to the nation for having been unable to convince some segments of the farming community about the benefits of the bills and said that since these segments continue to feel insecure, his government has decided to repeal the bills altogether. It is unfortunate that the government had to undo what was done very prudently and voted democratically by the Parliament.

Why would the Prime Minister announce to repeal the farm bills on the Gurupurab festival, the birthday of Guru Nanak, founder of the Sikh religion? He did so to remind the nation about the words of the Guru, ‘Vich Duniya Sev Kamaiye, Taan Dargah Baisan Paiyeea,” which means, ‘By taking the path of service to the nation, can a place be found in heaven.’ Surely, while making this very challenging decision, the prime minister would have kept in mind the challenges that India is facing from internal and external forces.

As he announced the repeal of the farm bills, the prime minister also requested the protestors to go home. The irony is that even after the withdrawal of the bills, the union leaders decided to mark the first anniversary of the agitation against the farm laws on November 26 with tractor rallies across state capitals. Reportedly, they also plan to send 500 farmers in tractors every day to Parliament to protest starting November 29. While the demands may have had some justification, the refusal to return home is clearly a sign of dishonoring their own promise.

It is even more distressing to note that so-called farmer leaders are already threatening not to return home and putting more demands on the table. They want guaranteed MSP, withdrawal of legal cases against protestors who allegedly violated law and order, compensation to the families who died during the protests and a memorial for them among other issues.

The opposition parties are adding fuel to the fire because Modi’s decision took away their thunder of making farmer protests an issue in the upcoming Assembly elections in the northern states of U.P., Punjab, Uttarakhand, and Haryana. If the protests had continued, it could have led to communal violence similar to what happened in Lakhimpur in U.P. just last month. This strategic decision will silence the political rivals from inciting violence on the shoulders of poor farmers. 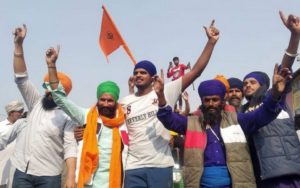 Protesters are happy but not ready to go back home

There is a group among Sikhs who have been misled for seeking a separate Khalistan state since Indira Gandhi was the Prime Minister. The break-India movement by Khalistan believers is squarely aided by Pakistan to avenge the separation of Bangladesh since her time. The movement is also funded by Khalistan-Sikh groups settled overseas (U.K., U.S.A., Canada, and Australia etc.) with Canada being at the forefront.  Additionally, the break-India movement is also aided and supported by anti-India groups in the West. Then there is a section of people who never made peace with the enactment of CAA, NRC, removal of Article 370, and Triple Talaq etc. All aforementioned elements are quite upset by the decision taken by PM Modi to repeal the bills since it leaves them with no issue to attack India and the BJP led Union Government.

So far as the external threats are concerned, India needs to stay ever vigilant from both China along the Line of Actual Control (LAC) and Pakistan along the Line of Control and the International Border. Both countries hold the potential to escalate military action if they feel that the internal situation in India is weak and tenuous. It is no surprise that Pakistan has intensified the incidences of violent attacks and terrorist activities in Kashmir and the frequency of drones from across the border in Punjab. It is feared that China is funding ISI for Khalistan; the Chinese army and fighter jets are on the move on the border, and China is asking her people to store food. It is no small coincidence that the U.S. State Department issued a travel advisory asking citizens to not travel in certain areas of India due to China and Pakistan threats of attack. On the home front, there has been heightened movement of BSF and increased deployment of the military to sensitive areas.

Generally, the elections are accompanied by political rhetoric everywhere; but India, in the past, has witnessed political rallies turning into violence and communal tensions. It is my belief that the decision to repeal the farm bills is to restore India’s unity against external threats and contain internal communal strife. All I can hope for is that wisdom prevails for India’s unity against any external threats. I am confident that the vigilant law and order personnel will work against the potential for violence and anarchy until the elections are over.

This Article has been published on behalf of Project GNARUS, a syndicated service and writers collective. E-mail –  gnarus2021@gmail.com