You are here: Home / Areas of Study / Governance & Politics / Sand mining in Punjab: The problem and its manifestation
Share 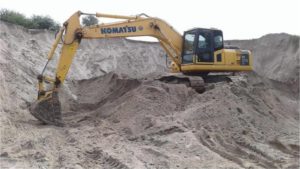 Sand mining is the process whereby sand is extracted from river beds and lake shores for the purpose of construction. Unrestricted extraction of sand can lead to several ecological problems. The inbuilt water filtration capacity and absorbing characteristic of the minor minerals plays critical functions in groundwater recharge and in ensuring lean season flow in the rivers. Excessive mining  negatively impacts this natural process. If mining goes deeper than specified, the aquifer gets punctured leading to an ecological disaster. Less sand in river beds can also lead to damage to the eco-systems along the river banks and flooding.

Till about two decades back there was not much demand for sand in Punjab, what was required could be easily extracted from the various river beds without causing any damage to the environment. In the beginning of the millennium, Punjab witnessed a huge boom in construction activity; housing societies, shopping malls, individual houses, roads and infrastructure started mushrooming at a very fast pace. Naturally, the demand for construction material spiralled, of which, sand formed one of the main ingredients.

In view of the high demand for sand and the damage that it was doing to the environment,  the Shiromani Akali Dal (SAD) led government, in 2007, moved to regulate the extraction and in the process also generate revenue for the state.

The Mines and Minerals (Development and Regulation) Act, 1957, stipulates that royalty is to be paid to the Government of India for any form of mining. In Punjab according to the Punjab District Mineral Foundation Rules, 2018, one-third of this royalty needs to be given to the state government.

This apart, according to the government’s Sustainable Sand Mining Management Guidelines 2016, sand mining from river banks should be restricted to a depth of 3 metres, or 10 percent of the river’s width, whichever is less, and sand or gravel cannot be extracted from within 200 to 500 metres of any crucial hydraulic structure. Environmental clearances are required for legal sites, which can take up to a year to process. A mining plan is also required,

Thus the government has restricted the amount of sand that can be extracted and also levied high royalty on the same. Such restrictions on a commodity in high demand normally leads to breaking or bending of the rules. Quite naturally, the situation led to the creation of what is today termed as the “sand mafia” in Punjab.

The sand mafia’s modus operandi is to extract sand without taking a licence and then extend mining operations beyond government-sanctioned areas. In this the involvement of Police and bureaucracy and of course politicians is alleged. With time, miners have started working with impunity and with total disregard of the rules.

While the government officials say that they have issued out helpline numbers for immediate information about illegal sand mining operations, those living close to the sand mining sites allege that sand miners operate at night on the riverbed and transport the sand with tipper trucks. Villagers were also afraid of visiting the river out of fear of the mining mafia.

Arrests are made from time to time and some tractors with trolleys and tippers are impounded, but, till date no kingpin has been arrested and jailed. The nearest that the government has reached is the arrest of  Bhupinder Singh Honey, the nephew of former Chief Minister Charanjit Channi , but then, he too can is a recipient of the pay-off rather than a mining war-lord.

As a result, the holes in mining sites have been dug as deep as 25 feet (7.62 metres) in order to excavate sand;  mining is prohibited in the monsoon season but no heed is paid to this restriction also. Digging up of the riverbed is such that aquifers’ are being punctured and groundwater is emerging at mining spots.

In mining hubs like Chandpur Rurki village in Punjab’s Shaheed Bhagat Singh (SBS) Nagar, heaps of stones are piled near 15-foot-deep pits. They are there for all to see and yet no action has been taken against the local miners. It is the same situation in hundreds of sites across Punjab.

Already the adverse effect of the mining is being felt by the locals living near the mining sites. On many occasions in the recent past, several villages in Ropar district alongside Sutlej river and its tributary Swan have been inundated due to weakening of the Dhussi Band. Several villages of Lohian area have been flooded due to a breach in a Bundh near Phillaur. All such instances are the result of illegal mining. 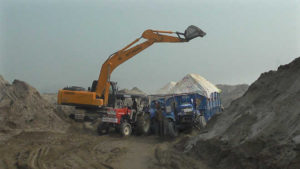 The estimated demand for sand in Punjab presently is upward of 20 million tonnes per year. The cost is touching the sky and leading to profits running in several thousand crores of rupees. “I did a survey when I was submitting a petition to court. I submitted that the sand mafia is earning Rs 14.5 crore on an average via mining on a daily basis,” claims Bachiter Singh, an activist against the sand mining mafia.

The mines were auctioned off for the first time in 2007 by the then-SAD led government. However, over the years, the government has been unable to auction any quarry leading to a considerable loss in revenue for the state. In 2017-18 fiscal, Congress government won elections on the promise of restricting the sand mafia but was not able to make even Rs 50 crore from sand mining trade because the miners preferred the illegal route and were sure of its continuance. Quite obviously, the only difference in the mining business that happened was that the shareholding changed hands.

It is alleged that such is the standard of coordination in this trade that norms are established for the party in power to get 70 percent share of the proceeds, with the remainder 30 percent going to the “outgoing” political dispensation only to keep quiet and allow unhindered operations. In order to maintain further legal immunity the sites are now controlled and operated by contractors from outside the state who have formed syndicates.

It is not unusual for mining syndicates to resort to intimidation, threats and outright violence against those who hinder their operations. Teams of the mining departments have been attacked by the goons of the mining mafia .

The matter is covered extensively in the media to the extent that illegal sand mining has become a household word. Naturally, there are activists working on the issue and questions are being asked from the administration. The deputy commissioners of the affected areas say that they have announced toll free numbers  to register complaints. Drones are also being used and Nakas (Check Points) have been established. The locals say that the mining operations are now being done mostly at night  and, in any case, such methods do not lead to the nailing of the kingpins.

The SAD was defeated in 2017 due to the cartelisation of the sand-mining business. Congress came to power on the promise of obliterating this practice and has now lost due to an inability to do so. Obviously, the lure of the fast buck makes the elected representatives forget their promises and take a piece of the pie. In the tail end of its tenure, Congress Chief Minister Charanjit Channi did try to lower sand prices from Rs 9 per cubic foot to Rs 5.5 at the pithead but the miners said that it would be impossible to provide sand at that cost.

One has to wait and see the reaction of the Aam Aadmi government whose manifesto also promised curtailing this illegal business. As things stand, the mining business continues to be controlled by the political class, spread across the political spectrum.

Former President of the Congress party, Navjot Sidhu, has stated that there are approximately 102 mining sites spread across 14 districts of Punjab. The demand for sand is 2o to 30 million tonnes per year. According to him, if implemented in a systematic manner, the sand mining policy has the potential to generate revenue of up to Rs 2000-3000 crore over the next five years, while also creating about 5,000 direct jobs and 15,000-20,000 indirect jobs in the sector.

The main focus of the government should be instituting a drastic reduction in the extraction of sand so as to balance out the impending ecological disaster. When seen in this perspective, if the incumbent government applies an honest approach it would, instead of generating money, be spending money for the sake of ecological balancing. A difficult call for the Aam Aadmi Government that is depending upon an annual earning of Rs 20000/- crore from sand mining to be used to make good its promise of giving Rs 1000/- to every lady of Punjab every month.

Farmers living near the sand mining sites feel that they should be allowed to conduct mining operations instead of the government auctioning their land to a contractor for mining; this would help in sustenance of thousands of farmers cultivable land that has turned infertile over the years and is just sand. Government has turned down this proposal on grounds that it has no provision in the mining by-laws to give this sanction.  Farmers are entitled to royalty for the first three feet of sand in their fields and anything below that belongs to the government as per the law of the land. In case the Aam Aadmi Party actually wishes to break the sand mafia it should seriously consider this proposal being made by the farmers.

Environment experts, social activists and lawyers feel that strict mining regulations have exacerbated the problem because it is easier to avoid them than it is to follow them. This is also an area that the new government can explore.

The bottom line is that the state of Punjab is languishing at the bottom of the list in India so far as ensuring sustainable sand mining practices is concerned. This is leading to an ecological problem of devastating proportions.