You are here: Home / Areas of Study / National Perspectives / Security of the Nation is in safe hands of the Indian Army
Share 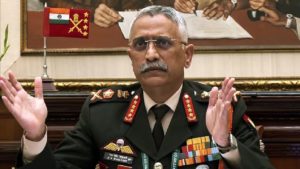 Every year, 15 January, is celebrated as Army Day in India. On this day, the first Indian officer, General (later Field Marshal)  KM Cariappa, took over as commander-in-chief of the Indian Army. The nation had every reason to be proud to have an Indian at the helm of its forces. It is customary for the incumbent Chief of Army Staff (COAS) of the Indian Army to hold a Press Conference as a prelude to the Army Day celebrations. This year too, the press conference addressed by General MM Naravane, was conducted on the virtual platform in view of the COVID situation.

As always, it was well attended, the COAS  in his crisp and highly professional opening remarks that took only 15 minutes, gave a comprehensive overview of the operational and administrative developments in the Indian Army during the year gone by. He also dwelled on the strategic thought process of the army in terms of capacity building, force restructuring etc.

As is the general pattern, the Chief initiated his brief by touching on the Northern borders, specifically the situation in Jammu and Kashmir and Ladakh. The questions asked were also mainly concerning these sensitive regions. The interaction brought out many significant points.

While speaking on J&K, the Chief expressed satisfaction with regard to the understanding for ceasefire reached between the Director Generals of Military Operations (DGMO) of India and Pakistan in February last year that has been holding  and has been “mutually beneficial with the sustainable peace resulting in marked improvement in relations between the two countries.”

Having said that, the Chief was candid in admitting that “there has been an increase in the concentration of terrorists in various launch pads and repeated attempts towards infiltrations have been made which exposes the nefarious designs of our western neighbour.”

The chief also said that there has been an effort to give an indigenous hue to terrorism by setting up a facade of proxy terror Tanzeems. This apart, various other inimical elements are trying to disrupt peace in the valley mainly by targeting minorities, migrant labour etc. Such attempts, however, have failed miserably due to lack of public support.

The chief made it very clear that the army continues to follow a policy of zero tolerance for terror and is committed to extracting dire cost on terrorists if called upon to do so. He spoke of the region witnessing peace and development due to the “whole of government approach” being adopted which, he said, has also led to a progressive improvement in the security situation.

The statements of the Indian Army Chief find resonance in the ground situation. Even as the new year sweets were being exchanged on the Line of Control (LOC), infiltration attempts were made from the Pakistani side on 1 January in Keran sector, District Kupwara and on 2 January in Bhimber Gali sector, District Poonch; alert Indian troops successfully foiled the same.

In pursuance of the policy of zero tolerance for terror as elucidated by the Chief, the first few days of the year saw more than six terrorists eliminated in a series of counter-terrorist operations in different areas of Kashmir. Such sustained operations will go a long way in stymieing the nefarious agenda being propagated by enemies of the country. 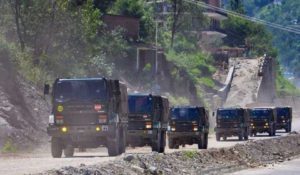 Military build-up in the Northern sector

In reference to the whole of government approach, it is to the credit of the present Government in the centre as well as the state that it has, through NIA and other means, closed the conduits of funding (Hawala/Hundi) to a great extent. The economy of terror in Kashmir has been choked substantially which, in turn, has stalled terrorist operations in the Union Territory.

The Ladakh region elicited a lot of interest during the press conference.  The Chief stated that the army is maintaining the highest levels of preparedness along the Northern border and at the same time engaging in dialogue with the PLA. As a result, there has been disengagement in some areas. He said that the 14th round of Corps Commander level talks are underway and there is hope of some good development.

Having said that, he was forthright in admitting that the threat has not decreased and that the army has gone in for reorganisation and realignment of forces in keeping with its mandate of ensuring territorial integrity. He said that the Indian army is in the process of augmenting its capability all along the northern front (especially eastern Ladakh), not only in force structure but in infrastructure and equipment etc.

The chief put to rest all apprehensions of lack of preparedness that are raised by some elements. He clarified that upgradation and development of infrastructure is being carried out in a holistic and comprehensive manner. All weather roads, strategic railway lines, bridges and storage facilities etc. are being enhanced all along the LAC in the Northern as well as the North-East sectors. Now the force is in a better position than a year earlier.

The chief assured the nation that while  India will continue to engage PLA in a firm and resolute  manner, necessary safeguards are in place to cater for any contingency. He rooted for the talks as the best means to resolve issues and said that the ongoing talks have shown that we can sort out things through dialogue. He also admitted that the dialogue process is likely to be long drawn and will involve the political as well as diplomatic levels. He further admitted that to expect that every round will have a decision is unreasonable.  He assured the nation that de-induction will be done only after resolution of friction areas and once confidence is built on the basis of mutual trust and security.

When the Indian Army Chief speaks the entire nation and the international community listens. The General has assured the country that it is in the safe hands of its Army that will ensure her sovereignty and territorial integrity at all cost. India will not succumb to any pressure, be it from China, Pakistan, collusive or of any other nature. She is ready to carry on with talks for a long period of time if need be even as military preparations for all eventualities are in place.