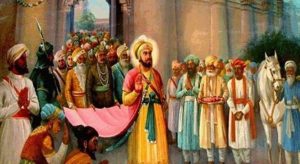 Diwali  and its associated festivals are celebrated by Indians across the world with great joy and enthusiasm. The festival is celebrated by Hindus to commemorate the return to Ayodhya of Lord Ram from his 14 years exile and after successfully defeating and killing the demon King Ravana who has kidnapped Devi Sita, the wife of Lord Ram. The day also holds a great significance for the Sikhs since it was on this day in 1619 that the sixth Guru of the Sikhs, Guru Hargobind,  returned to Amritsar from Gwalior where he had been imprisoned by the Mughals. In Sikh history and culture, it is the second most important day after Baisaikhi in the month of April that signifies the creation of the Khalsa by Guru Gobind Singh JI.

Guru Hargobind had been imprisoned in the Gwalior Fort on orders of the Mughal Emperor Jehangir. The reason for the young Guru’s imprisonment was no more than religious bigotry and  apprehension of the Emperor and the Mughals about the popularity of the Sikh religion and its growing military power. The Guru’s father, and fifth Guru of the Sikhs, Guru Arjan Dev, had been martyred for similar reasons of religious bigotry.

While in Gwalior Fort Jail, Guru Hargobind came into the acquaintance of 52 Hindu Princes imprisoned there due to evident cases of political persecution and exploitation. They were interned under deplorable conditions by the oppressive Mughal regime.  The Guru spent his time in prison in looking after them and became their spiritual mentor.

The release of the Guru was negotiated with Emperor Jahangir by two Muslims, Sain Mian Mir, an old loyalist of the Sikh faith and a friend of Guru Arjan Dev Ji and Wazir Khan, the Governor of Lahore and another admirer of the Guru. They convinced the Emperor that the Guru and the Sikhs held no ill will towards the Mughals and as such were not a threat to the Mughal Court as they were made out to be by some with a vested interest. The Emperor realised his folly and agreed to free the Guru.

The Guru agreed to be freed only if the other Hindu Princes were also freed along with him. Jehangir,  already under pressure, relented grudgingly and ordained, “Let those Rajah’s be freed who can hold on to the hem of the Guru’s dress and walk out of prison.” Jehangir thought that only a few of the prisoners would be able to come out.

The Guru, however, outmaneuvered the Mughal Emperor by getting a special dress with a large hemline made. Ultimately, all 52 princes who had been wrongly incarcerated managed to get freedom along with the Guru. 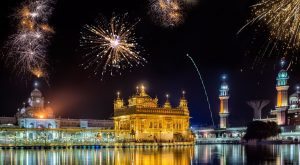 The Sikhs celebrate the auspicious  occasion as “Bandi Chor”(release of prisoners). Guru Hargobind is also referred to as “Bandi Chor Baba.”   The arrival of the Guru at the holy city of Amritsar on Diwali Day was celebrated by lighting of hundreds of lamps. The Sikhs received their Guru in  a manner similar to the one adopted by the people of Ayodhya when their beloved Prince came back from exile.
Another important Sikh event associated with Diwali and Bandhi Chor Divas is the martyrdom in 1734 of the elderly Sikh scholar and strategist Bhai Mani Singh. Bhai Mani Singh was the Granthi (Head Priest) and Jathedar (community leader)of Akal Takth as appointed by Guru Gobind Singh. He was  killed brutally by the Mughals for refusing to pay to them a special tax for a meeting in the Gurdwara to commemorate Bandi Chor Divas.