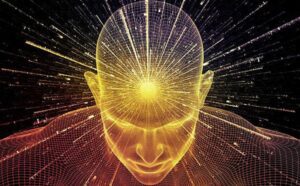 Often we think whether there is a deeper inner mind inside our usual functioning and thinking outer mind. Many a times, we may feel as if there is a deep detached observer present inside us observing and comprehending everything happening in the outer conscious brain.

The outer mind runs in all directions incessantly like an unrestrained young mare. It is unclear as to whether there are any reins controlling the forceful movements of the outer mind. Or whether these reins are mostly under the influence of the neuron-endocrine system rather than the inner mind. Perhaps there are reins on either side, and it is a matter of personal disposition as to which way the outer mind gets preferentially drawn towards- the calm deep inner solitude or the raucous unruly neuron-endocrine influence.

Sometimes during moments of silent contemplation, it becomes obvious that there is a deep inner consciousness which is aware of the good or bad, or the right or wrong that we do. And this inner mind may not necessarily agree with the decisions made by the outer mind. Although it remains as a detached observer.

Perhaps this inner stable mind is a function of the sustained diastolic flow of blood from the heart and it follows the stable rhythm of the diastolic brain perfusion during the times when heart is resting in between its beats.

And during those times when the heart beat generates a systole, the thrust of blood flow preferentially generates the thoughts of the outer conscious mind which in turn govern our immediate actions and deeds.

When we face the consequences of our actions, be it good or bad, it’s the outer mind that senses the agony or bliss, whereas the inner stable mind simply remains aware of what is going on as an observer.

The inner mind may even develop a deeper thought of its own chemistry where it may not agree with the decisions being made by the outer mind especially if these decisions are wrong or laden with guilt or shame. However, the voice and views of the inner mind remain relatively subdued and outdone by the cacophony of the raucous and dominating outer mind.

Philosophers may name this inner voice of consciousness as soul. However then this conversation will become one of a spiritual nature rather than scientific. So far, it may at least be scientifically plausible to accept that both the inner and outer mind are a function of metabolism in a living being. By its nomenclature as a soul, we then give it a different meaning as souls in general are expected to be designated as entities independent of body and their make is not dependent on life sustaining metabolism. Therefore we will not name it as a soul, at least not now.

Quite likely, the neuron-endocrine system with its set of hormones governs the activity of the outer mind. Which is why perhaps ‘fright or flight’ or excitement reactions are accompanied by changes in rates of heart beats and breathing that mainly shoot up the systolic blood pressure.

The inner mind however doesn’t usually get affected by the fluctuations in physical metabolism arising from usual activities of life.

One of the benefits of deep meditation possibly may accrue from its ability to still the outer senses, restrain the passionate forces of neuron-endocrine axis creating havoc, and obtain a stillness allowing the inner mind to dominate over the outer mind.

The outer mind would also generate deep thoughts of displeasure or guilt created by sins and crimes which are presented forth to the inner mind. However, it is unclear if we are able to pay heed to the voice of the inner mind. Logic and common sense guides us to excel in life by hook or crook, indulge in excesses of life, live life to the hilt, give in to our passions- all because ‘we live only once’ or ‘life is too short’. Does this possibly lead to a slow death of the inner mind? Gradually and gradually one crime or unlawful act becomes 2, 2 becomes 3, and after a period of time, a layer of immunity is created that separates and subdues the inner voice leading either to its complete annihilation or isolation.

Listening to the Inner mind

I will rather go with isolation rather than annihilation as I do feel that even in the worst of criminals, the inner mind can occasionally be woken up for them to burst into tears and feel sorry, repentant, remorseful and shameful for their acts. Whether the constant load of bad deeds in the seasoned ones causes an evolutionary change of the DNA or equivalent fabric constituting the inner mind remains unknown. Here again I feel that the character, nature and chemical constituent of inner mind perhaps remains unchanged but the layering of outer mind gets thicker and thicker further isolating and subduing the voice and thoughts of the inner mind.

The question of a free will remains unanswered still. Who are the individuals who find it easy to remain loyal and listen to the sound of their inner mind? And who are those choose to ignore them? Is there a chemical define of good and bad? How does the brain define sin or unlawful act, and what generates guilt or regret for those who are capable of generating it? Perhaps guilt is it a function of the inner mind, a knock on the door before it is too late. Perhaps ignoring it will further isolate the deep inner mind from the outer mind and bring it more into a superficial animo-human plane where senses rule the roost governed by neurohumoral axis. And whether we choose to pay heed to this or ignore it depends on the existing degree of isolation of the inner mind from the outer mind.

Although it may not be applicable to all, but to an extent one can safely conclude that with age, the neuroendocrine systems do weaken and calm down. Body isn’t a bag of hormones at 70 compared to 18, barring some exceptions and older people tend to be less aggressive, less virile and with reduced drive.

In line with that one may expect the inner mind to be gradually getting empowered and increasingly getting acknowledged more and more to eventually dominate over the outer mind. The calmness attained with age should over a period of time restrain the senses. The inner mind should merge with the outer mind severing it’s bond with the neuroendocrine and neurohumoral axis. The mind of systole and diastole should become one and in unison without any fluctuations due to the gradient of pulse pressure generated by a heart beat.

And if that does not happen, should that be a cause for concern?