You are here: Home / Religious Studies / The Battle of Chamkaur: An epic that changed the course of Indian history
Share 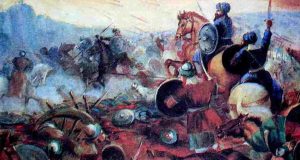 6 Poh, Bikrami, which falls on 22 December 2022, marks the beginning of the Shahidi  (Martyrdom) week of Sikh history. During this week, the Khalsa, under the leadership of Guru Gobind Singh, displayed valour and sacrifice that has no parallels in the history of the world.  It was also the saddest week for the Sikhs who lost the most revered members of the family of the Guru and his faithful followers.

In the course of this week, the Sikhs fought heroic battles to ward off the enemy who was pursuing them in large numbers. The most significant among these was the Battle of Chamkaur Sahib, in which the Khalsa fought the coalition forces of the Mughals and Rajput hill chieftains over three days from December 21 to 23, 1704.

In the battle, Guru Gobind Singh along with his two sons and forty odd followers withstood the might of a huge army from a small mud fortress at Chamkaur Sahib. The enemy force consisting of infantry, horse cavalry and artillery vastly outnumbered the Khalsa.

The prelude to the battle goes back to the time when Guru Tegh Bahadur, the father of Guru Gobind Singh, embraced martyrdom on 11 November 1675 for the sake of the Hindu community that was being forcibly converted to Islam by Emperor Aurangzeb.  Guru Gobind Singh, on becoming the spiritual leader of his sect, was determined to convert his community into a force that would fight against all forms of evil and oppression. It was in furtherance of this thought that he created the Khalsa on 30 March 1699.

The Khalsa was enjoined to maintain a brotherhood of arms and take decisions collectively to fight the oppressor for the sake of the helpless and downtrodden. The Khalsa started attracting people in vast numbers. The hill princes got nervous of the rising power and military strength of Guru Gobind Singh and they called upon the Mughals to quell the same.

Accordingly, the joint forces of the Mughals and the hill princes attacked the Sikh forces that were tactically dispersed in five forts. Guru Gobind Singh, with the women and children of his family and a small force, was in the fortress of Anandpur Sahib.

The coalition forces could not gain the quick victory that they were looking for and were forced into laying siege on Anandpur Sahib. The Sikhs from within the fortress and from the surrounding forts attacked the invading forces with artillery fire and subjected them to lightning raids in which supplies were seized and terrible casualties inflicted upon the invaders.  All attempts to storm the Anandpur Sahib citadel were unsuccessful. The situation went on for seven long months and the coalition forces started feeling the pressure of stretched logistics and massive losses.

It was at that stage that a proposal of safe passage to the Guru, his family and his followers along with negotiation for peace on honourable terms was sent on the name of Emperor Aurangzeb; the other chieftains likewise gave their sacred word.  In view of the suffering of women and children and pressure from his mother the Guru agreed to take the safe passage.

Guru Gobind Singh with his family and troops came out of Anandpur Sahib Fort on a cold night in December (6 Poh, Bikrami). No sooner were they out in the open attacked them near Shahi Tibbi as they were proceeding towards the banks of the River Sirsa. After successfully warding off the enemy at Malak Pur, Guru Gobind Singh along with Sahibzada Ajit Singh, Sahibzada Jujhar Singh and a few Sikhs reached Kotla Nihang. Bhai Udai Singh and all others who fought the heroic rearguard action fell on the battlefield. Bhai Bachitar Singh who had been seriously injured  was also brought to Kotla Nihang . It was at this stage that Guru Gobind Singh declared his full faith in the one Almighty God and declared him his protector. 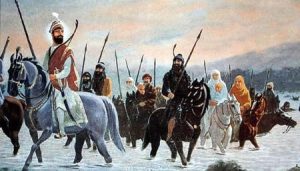 The Guru and his family crossing River Sarsa

Sadly, the family  of the Guru and the Sikhs  got divided into three groups. The mother of Guru Gobind Singh, Mata Gujri, along with the younger sons of the Guru, Sahibzada Zorawar Singh and Sahibzada Fateh Singh went with their old time and supposedly loyal servant Gangu and stayed in a hut at Kuma Mashhki near Sarsa. They were later captured by the Governor of Sirhind due to a sell out by Gangu. The young Sahibzadas were interned alive in a brick wall and Mata Gujri died of shock. The wives of the Guru were in the third group. Mata Sundri and Mata Sahib Kaur along with Bhai Mani Singh left for Delhi via Haridwar.

The main contingent of Guru Gobind Singh decided to take a stand at the mud fort of Duni Chand in Chamkaur Sahib. The Mughal commander, Wazir Khan, was accompanied by many Generals like Ismail Khan, Jahan Khan and  Faulad Khan. He wanted to storm the fortress but there was hesitation within his forces in view of their inherent fear of the Khalsa, hence, the attack did not go through and a siege was undertaken.

Guru Gobind Singh gave an impression of a large fore being present in the mud fortress by swiftly changing location of his troops and firing volleys of arrows at the enemy. He also constituted small parties that went out to raid the enemy in what was a “fight to the end” since coming back against such heavy odds was not an option. These small groups struck terror among the enemy and killed them in large numbers before falling to a hero’s death. The young sons of the Guru, Ajit Singh and Jujhar Singh, also went out and fought to their last breath. The heroic fight by Sahibzadas

The Guru wanted to stay with his troops and fight to the last but when only eleven soldiers were left, the Khalsa invoked the oath which made it incumbent for the Guru to heed the advice of five of his disciples and compelled him to leave the fortress.

The Khalsa then fought to the last with one dressed as the Guru to deceive the enemy while the Guru escaped in the other direction. In the subsequent days, the Guru was helped by many disciples, including Muslims, to escape and after many halts managed to reach the safety of a place called Dina.

The Battle of Chamkaur laid bare the moral degradation, cowardice and vulnerability of the Mughal imperial forces. The fact that they used deceit to defeat an adversary much weaker in strength indicated their unwillingness to fight with determination. Their inability to attack and overcome even forty Sikhs in a mud fortress pointed towards the inefficiency of the military leadership.

The proclivity of the Mughal rulers to terrorise their subjects into submission became apparent, it also became quite obvious that when faced with a determined opposition they did not have the will to fight back.

The Khalsa, on the other hand, got converted into an ideologically driven and motivated fighting force of absolute fearlessness.  Much after Guru Gobind Singh had attained martyrdom, his Khalsa carried on with their symbols which made them distinguishable to the enemy among the population; this made them stand and fight while being ever conscious of the legacy and responsibility that their Guru had bestowed upon them and gave them the upper hand despite all odds.

The Battle of Chamkaur resulted in infusing a strong military ideology among peasants which led to the ultimate downfall of two of the strongest empires (Muslim and Afghan) seen in the history of the world and creation of a new one – the Sikh Empire.

December is the time of the year when the world in general and the Sikh community in particular needs to reflect on the treachery that was met by extreme valour of the Khalsa all for the sake of humanity. While celebrating Christmas and winter vacations, it is also important for the Nation to remember this epic battle that changed the history of the Sub-continent, broke down a tyrannical regime and brought forth a force that has forever lived on the path of righteousness.