You are here: Home / Areas of Study / Governance & Politics / The BJP is poised to give good governance to Punjab
Share 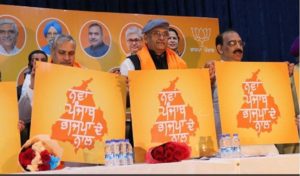 On November, 19, Prime Minister Narendra Modi came on air to pay his respects to Guru Nanak Dev, the first Guru of the Sikhs. In the course of his address, he informed the Nation that his Government had decided to repeal the three Farm Law’s that had triggered an agitation among some segments of the farmers community.

While emphasising the benefits of the said laws and reiterating the honest intent of the government in promulgating them, the prime minister said that the repeal was a result of the inability of his government to convince a certain segment of the farmers community, especially those from the northern states of Punjab and Haryana, about the usefulness of the laws.  In a statesmanlike gesture, he apologised to the Nation for the failure of his government to convince these segments. Having given the commitment, the government repealed the laws on the very first day of the winter session of parliament on 29 November.

The move has had an electrifying effect on the poll bound state of Punjab where politics were hinged around the Farm Laws and the resultant agitation. Suddenly, such political parties that were basing their election campaign on the farm laws agitation were left without an agenda.

As the farmers of Punjab started getting back from the agitation site at the Singhu border of Delhi, the moot question was – what exactly had been achieved by the agitation? The realisation has dawned among the farmers that the leaders of the farm unions have barely managed to maintain status-quo ante  which  cannot be looked upon as a victory.

More and more voices can now be heard asking the farm union leaders and the state government of Punjab to come up with an alternative policy to modernise agricultural practices in Punjab, increase farm incomes and ensure that no farmer would need to commit suicide in the future.

The ruling Congress party in the state, in particular, is being called upon to make good its promise to waive off all agriculture loans as promised in its election manifesto of the 2017 state legislature elections. Since the amount comes to upwards of a massive Rs 90,000 crore the state government is not in a position to meet the promise, this is causing considerable resentment within the farming community of the state.

The electorate in Punjab is quite disenchanted with the present leadership of all parties, especially the Congress and Shiromani Akali Dal (SAD) that have been in power in turns over the last many decades and have literally presided over the complete disintegration of the state. 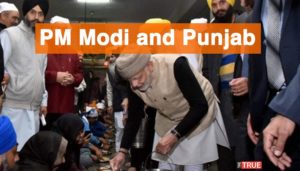 PM Modi has great respect for Punjab and the Sikh religion

The BJP, over the last one year plus, remained on the back foot because of the negative perception about the farm laws in the state and due to the Corona pandemic. It is to the credit of the party that it maintained its connect at the grassroots despite the challenges. Party workers were active in providing all support to the Corona victims and those from the poor families who were financially affected due to the pandemic. The core of the party remained intact despite many motivated attacks by the agitators. There were a few courageous Sikhs who even joined the party fold in the course of the agitation and went on to play a crucial role in moderating perceptions.

Politically speaking, the BJP has remained in alliance with the SAD as a junior partner for many decades. It is now entering the election arena on its own with a declared intent of fighting the elections in all 117 state assembly constituencies while earlier it used to fight only in 23 odd constituencies.

Many eminent political leaders and social workers of the state are seeking to join the party now since they have realised the potential of the party to provide good governance in the state. The party leadership is inducting such personalities into its fold, but only after  ensuring that there is likeminded thought. Thus, the grassroots outreach of the party is increasing at a very fast pace.

The party held a Punjab Pradesh Parishad at Ludhiana on 14 December, 2021. Party leaders down to the Booth level were invited to attend. A huge attendance, upwards of 5000 people,  gave an indication of the preparedness of the party to fight the election with maximum strength and commitment.

The BJP is not following the path of promising doles in electricity, water, education, health etc as is being  done by the other parties, more so, the Congress, the SAD and the Aam Aadmi Party (AAP). Instead it has identified the core issues that ail Punjab and has promised to eliminate the same. These include elimination of corruption, strengthening  of  law and order, putting a stop to drug proliferation, providing world class education and health facilities, improving upon the infrastructure and industrial signature and generating employment  among others. An early resolution of the sacrilege case is a big and solemn promise that the BJP has given to the people of Punjab. The focus will be on elements that can remove fiscal distress and give a boost to growth and development. The BJP is more interested in empowering the people rather than putting them on life support with doles as seems to be the intent of other parties.

The  BJP is also leveraging the special bond that Prime Minister Narendra Modi has with Punjab that has manifested itself with the opening of the Kartarpur Corridor in November 2019 and its re-opening in November this year as soon as the situation created by Corona improved. This apart, the prime minister has taken special interest in ensuring that those guilty of the 1984 riots are brought to justice. He has removed restrictions on travel back to India imposed upon Sikhs in foreign shores over many decades for a perceived involvement in the insurgency that plagued the state under Congress rule in the 1980’s. He has given special  GST exemption to the food being prepared in the Langars of Sikh Gurdwara’s and remained personally involved in organisation and celebration of 550th birth anniversary of Guru Nanak Dev, 350th birth anniversary of Guru Gobind Singh and now the 400th birth anniversary of Guru Tegh Bahadur. The list is long.

Of all the parties that are in the election fray only the BJP has the strength and wherewithal to address the issues that presently plague Punjab. The party has the capability of infusing necessary resources and talent that can give a boost  to the economy and kick start it. Once the impetus is given the famed Punjabi entrepreneurship, hard work and innovation will take over and, in no time, Punjab will gain its lost glory. The BJP is poised to give good governance to Punjab, it is hoped that the people of Punjab will choose their next government with eyes wide open. An inability to do so will create a situation where the deterioration will be irreversible.

(Jaibans Singh  is a social worker and columnist)