You are here: Home / Areas of Study / Governance & Politics / The case for voting rights to Sehajdhari Sikhs in SGPC elections
Share 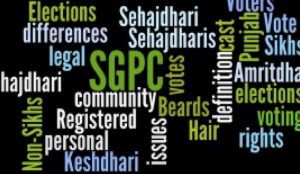 The British had given over Sikh Gurdwaras in Punjab in the hands of their own people who were steeped in corruption leading to gross mismanagement of the holy shrines. The intention was to break away the people of Punjab from their faith in Sikh tenets and Sri Guru Granth Sahib and thus pave the way for conversion to Christianity.

The Shiromani Gurdwara Prabandhak Committee (SGPC) came up to counter British effort. Akali Dal was formed on 14 December 1920 as a task force of the SGPC. With direct and indirect support of the Central Sikh League, the Indian National Congress the SAD started a non-violent struggle against the government for the control of the Gurdwaras. After a lot of agitation and face-off with British authorities that also witnessed considerable violence and loss of lives, Malcolm Hailey, the Governor of Punjab came under pressure and presented a draft of a new Gurdwara Bill to the Akali leaders imprisoned in Lahore fort. The bill met all the Akali demands and was signed into law on 28 July 1925 by the Viceroy of India after its ratification by the Punjab Legislative Council. Central Gurdwara Board was elected by the Sikhs to be the custodian of all important Sikh places of worship. The first meeting of the Gurdwara board passed a resolution that its designation be changed to SGPC which was accepted by the government

The SGPC was a committee consisting of 175 members including those appointed by the Government that became responsible for the management of Gurdwaras. This became the focal point for the movement for the reformation of Sikh religious places. With time Master Tara Singh emerged as the tallest leader of the Akali movement.

Post independence management of Gurdwaras in Punjab, Haryana, Himachal Pradesh and Chandigarh continued to be governed by the Gurdwara Act, 1925.  In 1953, an amendment to the 1925 act allowed the reservation of 20 out 140 seats on the SGPC for the members of the Sikh scheduled castes. The SGPC has two types of Gurdwaras under it, the first is those that the organisation controls directly and the second is those controlled by an independent committee that pay Daswand (10 percent collection to SGPC).

On October 8, 2003, the BJP government issued a notification amending Sections 49 and 92 of the Gurdwara Act to deny Sehajdhari Sikhs the right to vote in SGPC elections. The architect of this notification was Akali Dal as represented by Prakash Singh Badal and Balwant Singh Ramoowalia and it was to be effective for five years. The Sehajdhari Sikh Federation challenged the MHA’s notification of 2003 the same year in the Punjab and Haryana High Court.

SGPC elections were held in 2011 while the case was in court. The voter list for the 2011 SGPC elections comprised of around 57 lakh voters.  170 members were elected and 15 nominated members. 157 members were from Punjab while Haryana had 11 members and one each came from Himachal Pradesh and Chandigarh. Jathedars of the five Takhts and Jathedar of Akal Takth continued to be ex-officio members.

157 of the a total 170 seats contested were won by the SAD-Sant Samaj alliance. The main opposition formed by the Panthic Morcha and the Shiromani Akali Dal (Amritsar) led by Simranjit Singh were badly routed. Mann, himself lost the poll from Bassi Pathana even as there were reports of non-Keshdharis casting votes in Badal village poll.

A few days after the SGPC elections,  on December 20, 2011, a three-judge High Court Bench quashed the government notification of 2003. The court said a valuable legal right could not be taken away except by a competent legislature, and left it to the competent legislature to decide whether the Act should be amended. SGPC challenged the orders of the Punjab and Haryana high court, pronounced on December 20, quashing the MHA notification of 2003.

On March 30, 2013, the Supreme Court asked the Executive Committee headed by Sardar Avtar Singh Makkar to manage the Gurdwaras and other institutions of the SGPC. The SGPC has been functioning under an interim arrangement mandated by the Supreme Court since 2013.

In 2016 the NDA-I led Government of India amended the Sikh Gurdwara Act 1925, The present status is that the Central Government had added provisos to Section 49 & 92 by the Sikh Gurdwara amending act 2016 whereby a restriction has been imposed on the registration of electors on their having shaven beard or shorn hair.

By the effect of this restriction, all persons who were covered under the expression of Sehajdhari Sikhs, under the defined expression in the act, stood excluded and debarred from registering themselves as voters for the purposes of election of  SGPC. Thus, the notification of 2003 was converted into law in retrospect.

After passing of the legislation, the technical challenge put to the notification dated stood gone and the pending appeal was rendered infructuous. On 15 September 2016, the supreme court disposed off the appeal filed by SGPC and ordered revival of the 2011 elected house of SGPC on technical ground of HC not deciding the issue of Sehajdhari Sikhs being or not being the Sikhs in the impugned order and provided liberty to Sehajdhari Sikh party to challenge the Amending Act 2016 before High Court.

Amending Act 2016 has been challenged by Sehajdhari Sikh party before Punjab & Haryana High Court in which notices have been issued to Centre and Punjab state.

Post Lok Sabha elections in 2019, calls for the much-delayed SGPC polls are getting louder. in February 14, 2019, the Punjab Vidhan Sabha had passed a resolution requesting the central government to hold SGPC elections. To this President SGPC, Govind Singh Longowal has given an argument that though elections were held in 2011, the new body could not conduct any meetings due to the court case. Hence, the body was continuing. He professes that he has been appointed only last year. This is a fallacious line being taken by SAD to delay elections.

The centre has since communicated that they will appoint a Gurdwara Commission. New voters are to be registered, delimitation of areas may also happen and only after that, elections can happen.

The Sikh Sehajdhari Federation was formed on 13 April 2001 and registered under the Society Act November 4, 2001. The Federation held a large congregation before Akal Takth and held Ardas by turning the Sehajdhari Sikh Federation into a political outfit. Dr. Paramjeet Singh Ranu is the founder National President of the Party. Even though its case has been rendered irrelevant by the amendment of the Gurdwara Act  in 2016 Paramjeet Singh Ranu has said the Federation “has been given special liberty to challenge the amendment Bill afresh.” Ranu said there was a “conspiracy” to divide the community.

The Akali Dal has controlled the SGPC for decades, but faces a challenge in view of the increasing number of Sehajdhari Sikh. In the SGPC the electorate is male/female above 21 years of age who are registered voters under Provisions of Sikh Gurdwara act 1925.