You are here: Home / Areas of Study / Governance & Politics / The Emergency of 1975: How Indira Gandhi led the country to chaos
Share 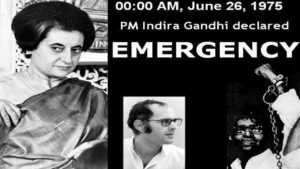 Most of Gandhi’s political opponents were imprisoned and the press was censored. The Emergency also saw the violation of a sundry of human rights. The period saw the shambolic forced mass-sterilization campaign spearheaded by Sanjay Gandhi. Therefore, the emergency period is considered one of the most controversial times in independent India’s history.

What led to the declaration of Emergency?

The socio-economic condition of India was in a dire state following the 1971 Bangladesh Liberation War and the staggering influx of refugees. The US Government, too, stopped all aids to India leading to an increase in commodity pricing and general distress among the people.A slow industrial growth coupled with a high rate of unemployment along with the government’s move to freeze the salaries of its employees led to an atmosphere of dissatisfaction. In 1972-73, the monsoons caused a delay in the food grain output, as well.

January 1974 saw students in Gujarat protesting against rising prices of food grains and other essential commodities and corruption in the state government, which soon found support with major opposition parties joining it. This led to the imposition of President’s rule in the state. Demands for fresh elections became intense. Subsequently, elections were held in Gujarat in June 1975, which the Congress lost.

Furthermore, students in Bihar started a movement in 1974 to protest against the same issues and they invited Jayaprakash Narayan (JP), who had given up active politics and was involved in social work, to lead it. His acceptance of the same took the issue to a national level.

Narayan led a huge political rally in Delhi’s Ramlila grounds on June 25, 1975, where he announced a nationwide Satyagraha for Indira Gandhi’s resignation. The government perceived this as incitement and felt that it would bring all government machinery to a standstill. The employees of the Railways too called for a nationwide strike, led by George Fernandes. 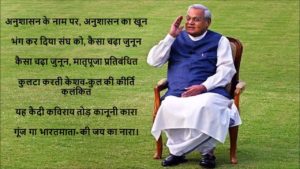 Disqualification of Indira Gandhi as an MP and proclamation of Emergency

During the 1971 Parliamentary elections, Indira Gandhi had defeated Raj Narain from the Rae Bareli constituency, who subsequently had filed a petition in the Allahabad High Court accusing Indira Gandhi of electoral malpractices.

On June 12, 1975, Justice Jagmohanlal Sinha found the Prime Minister guilty of misuse of the government machinery during her election campaign and declared her election null and void and also barred her from contesting an election for the next six years. The court, however, gave the Congress 20 days to find a replacement to Gandhi as PM.

Then, Indira Gandhi moved the Supreme Court against the verdict. On June 24, the Supreme Court granted her a partial stay on the High Court order – till her appeal was decided and that she could remain an MP but could not take part in the proceedings of the Lok Sabha.

The government responded to the June 25 strike by declaring a state of emergency that night itself.

According to the government, there was a threat of internal disturbances and said a grave crisis had arisen which made the proclamation necessary. President Fakhruddin Ali Ahmed declared a state of internal emergency upon the Prime Minister’s advice on the night of June 25, 1975, just a few minutes before the clock struck midnight.

Post-midnight, the electricity to all the major newspaper offices were disconnected and were restored only two to three days later after the censorship apparatus had been set up.

On June 26, a large number of opposition leaders and workers were arrested. The Union Cabinet was only informed about it at a special meeting at 6 am after all this was over.

The Period of Emergency

As soon as the national emergency was proclaimed by the President of India, all the powers were concentrated in the hands of the Union government. The government assumed mammoth power and restricted the fundamental rights of the citizens during the period.

The press was kept under duress. All newspapers needed to get prior approval for the articles to be published.

The Union government further banned the Rashtriya Swayamsevak Sangh (RSS) and the Jamait-e-Islami.

Moreover, the Constitution was amended in an autocratic manner, particularly in the 42nd amendment as the government enjoyed a huge majority in parliament. In the background of the Allahabad High Court verdict, an amendment was made declaring that elections of Prime Minister, President and Vice-President could not be challenged in the Court. Apart from this, Sanjay Gandhi, who did not hold any official position at the time gained control over the administration.

In January 1977, the government finally decided to hold an election in March 1977.

Indira Gandhi was defeated from Rae Bareli, as was her son Sanjay Gandhi from Amethi.