You are here: Home / Icons of Punjab / The martyrdom of Bhai Taru Singh
Share 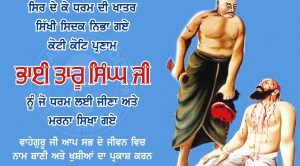 Sikh history is replete with stories of valour and commitment to the religion. The Sikhs and the Khalsa, who were in the 18 century persecuted by the Mughal regime, preferred to embrace death willingly and with great dignity rather than bow to the evil and sadistic Muslim rulers of those times.

Bhai Taru Singh, a Sandhu Jat Sikh from Village Poohla in Amritsar is one such hero who epitomises  the spirit of sacrifice of the Sikhs in the cause of religion, truth and justice. Bhai Taru Singh was born on 6 October 1720 in the house of Saheed Bhai Jodh Singh and Bibi Dharam Kaur. His father had laid down his life as a soldier of the Khalsa Army. Bhai Taru Singh  had a younger sister named Bibi Tar Kaur; they were a family of devout Sikhs who tilled land and led a frugal and pious life.

Bhai Taru Singh was greatly moved by an incident where Sikh fighters saved a poor girl from the clutches of the Mughal oppressors. He decided to dedicate his life to the fight for justice against the repressive Muslim regime. The evil Governor of Lahore, Zakariya Khan, had outlawed the Sikhs and forced them to stay in the jungles. Bhai Taru Singh, had limited means after paying taxes on his land to the government, yet he preferred to lead a very frugal life and gave most of his farm produce for sustenance of his Sikh brethren in the Jungles. The farm produce was taken to the sikh camps by Bhai Taru singh and his sister Bibi Tar Kaur.

This matter was reported to Zakariya Khan by one Akhil Das and Bhai Taru Singh along with his sister were arrested and produced in the court of Zakariya Khan in Lahore. In his defence, Bhai Taru Singh told the Governor that he had always paid the taxes that were due to him and what was left was for his use as he deemed fit and, as such, he could not be punished for giving to his brethren from that which belonged to him.

Zakariya Khan had already decided that he would punish Bhai Taru Singh and his sister. The Sikhs secured the release of Bibi Tar Kaur by paying the ransom money. For Bhai Taru Singh, Zakariya Khan laid out the usual choice between accepting Islam or being tortured and killed . Bhai Taru Singh readily accepted the second option and was accordingly arrested and tortured, but he did not relent. 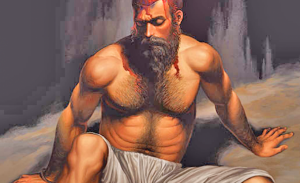 Legend has it that Zakariya Khan asked him as to where he got the strength to bear such extreme torture, to which Bhai Taru Singh replied that the strength came from his Kesh (unshorn hair) which were a blessing by his Guru, Guru Gobind Singh Ji. They were the symbol of his faith gave him the strength.

Zakariya Khan then ordered that the hair of Bhai Taru Singh be shorn along with a thin layer of his scalp so that they would not grow again. This torturous act is believed to be carried out on 9 June 1745. Bhai Taru Singh bore the extreme torture stoically and was left in prison to die a slow death.

It is believed that immediately after ordering the terrible atrocity on Bhai Taru Singh, Zakariya Khan fell seriously ill and was in great pain. He sought forgiveness for having thus tortured the Sikhs and particularly Zakariya Khan. His advisors told him that his condition would improve if he was hit upon his scalp by the shoes of Bhai Taru Singh. This was done and the pain being felt by Zakariya Khan reduced, yet, he died 22 days later. Bhai Taru Singh outlived Zakariya Khan and left for his heavenly abode on 1 July 1745. He was barely 25 years of age at that time. His dead body was cremated outside Delhi Gate at Lahore. Sikhs later constructed a memorial for him at the place of cremation and named it “Shahidganj” (Martyrs’ memorial). It became a place of pilgrimage for the Sikhs. In terms of the western calendar his the martyrdom day of Bhai Taru Singh falls on 16 July 2020.