You are here: Home / Agriculture / The ‘Toolkit’ Greta Thunberg Tried To Hide
Share

“Shit shit shit … Can you not tweet the toolkit … Our names are on it.” That was the message that Delhi police say 21-year-old Bangalore-based activist Disha Ravi texted to Greta Thunberg on February 2, begging her to take down a tweet she had posted with a link to a Google Docs file. Thunberg quickly took down the tweet and later posted a link to an “updated” document with incriminating details removed.

If there is a secret document that Greta Thunberg doesn’t want people to read, then naturally one is curious about its contents. The so-called “toolkit” may strike American readers as mundane, but that’s only because we have grown accustomed to the astro-turf methods of international NGOs. The Indians are taking it very seriously as an intrusion on their sovereignty

The “toolkit” describes methods for capitalizing on the farmers’ protests that have wracked New Delhi since November, after Narendra Modi’s government passed a package of laws liberalising agriculture markets. The farm reforms themselves are unobjectionable, a long overdue counterpart to the 1991 reforms that ended the “Permit Raj” in other sectors. But some farmers in Punjab and Haryana fear that deregulation will reduce prices for their crops. Tens of thousands of them have camped out near the capital.

The linked document included sample tweets, suggestions for in-person rallies, and a timeline for an escalating protest campaign climaxing on January 26. Unfortunately, the January 26 protest in New Delhi proved a little too climactic. Roads were swarmed, cell towers were destroyed, and one farmer was killed when, ramming a police barricade, he capsized his tractor. Farmers rushed police lines on horseback with swords, according to the Wall Street Journal. Hundreds of policemen were injured and many hospitalized. The Red Fort, a Delhi landmark, was stormed and the Sikh flag raised on its flagpole, raising worries about connections between protesters and Sikh separatism.

Statements of support for the farmers came from the usual suspects, like Reps. Ilhan Omar and Rashida Tlaib, as well as some unexpected ones. Rihanna tweeted “Why aren’t we talking about this?! #FarmersProtest” with a link to a CNN article. Trevor Noah did a flattering segment on The Daily Show. Meena Harris, the niece of the vice president, has been highly active on Twitter in support of the farmers, drawing parallels between the Modi government’s response and the U.S. Capitol incursion and decrying “militant nationalism” and “FASCIST DICTATORS.”

This all looked a bit too choreographed to the Modi government, but they didn’t have a smoking gun until Greta Thunberg tweeted her toolkit. One government spokesman went on TV saying, “This is the box of conspiracy,” as he held up a printout of the toolkit. “These are very concerted efforts, it is not that someone is impromptu making some comments,” said another spokesman. “Especially someone like Rihanna would never know, I don’t think she can even point out on the global map where India is.”

This is the angle that has most outraged the Indian public: the interference of foreign groups. “India’s sovereignty cannot be compromised,” tweeted cricket legend Sachin Tendulkar. “External forces can be spectators but not participants. Indians know India and should decide for India.” Digital records showed that the same activists who collaborated on the toolkit, including Disha Ravi, also participated in a Zoom meeting with representatives of Extinction Rebellion and the Canada-based Poetic Justice Foundation, which, according to its website, “challenges structures of oppression and discrimination through intersectional grassroots advocacy.” 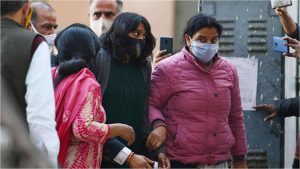 For some Western critics, it isn’t even about the protests at all. It’s about undermining Modi. Journalist Pieter Friedrich, listed in the toolkit as a resource person, is the author of Saffron Fascists: India’s Hindu Nationalist Rulers and a perennial critic of the BJP. Time magazine on February 15 published a breathless article connecting Modi with Donald Trump—“Hindu supremacism found a natural ally in white supremacism”—and suggesting both leaders pose a threat to democratic institutions.

Support within India for Modi remains high. One poll showed 80 percent of Indians support his handling of the protests. A November election in the rural state of Bihar saw the BJP increase its majority, suggesting that many farmers continue to support the ruling party. Indignation is mostly coming from outside the country.

The Time article is right about one thing: Donald Trump’s departure has given some people in the international NGO-sphere the idea that it’s open season on regimes they dislike, including Modi’s. From Vladimir Putin to the considerably less dictatorial Viktor Orbán, foreign leaders who dissent from the Davos line can expect the next four years to be rougher than the previous four, now that the White House is friendlier to would-be liberal meddlers.

Some have detected postcolonial hypersensitivity in India’s reaction, or overreaction, to the Thunberg tweet, which has extended to having Disha Ravi arrested for her involvement with the Google Doc. “What is the toolkit about?” one green activist asked. “It is nothing but a template, just like a booklet, that is being used to disseminate more information on the farmer protests.”

It’s true that India is exceptionally suspicious of any hint of imperialism, especially the creeping kind. India didn’t lose its sovereignty to the East India Company all at once but piece by piece. The British showed up in India to trade, and within a short time, without either side quite planning it, they were running the country.

Considering how sophisticated the methods of international NGOs have become, maybe the rest of us should be more like the Indians. So-called “intersectional grassroots advocacy” is often just a cover for highly organized media manipulation. When activism becomes so routinized that it becomes a “toolkit” that powerful left-wing groups can pop open at any time and use to undermine legitimately elected leaders anywhere around the world, then that activism has ceased to be, in any meaningful sense, democratic. Those who see it as a threat to popular sovereignty are right.

(Helen Andrews is a senior editor at The American Conservative)