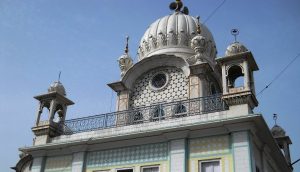 Guru Nanak Dev Ji was born in a Hindu family on 29 November 1469 at Rāi Bhoi Kī Talvaṇḍī (present day Nankana Sahib in Pakistan Punjab). His father Kalyan Chand Das Bedi aka Mehta Kalu was an affluent businessman. His mother was Mata Tripta. Nanak had only one sibling, a sister named Nanki who was five years elder to him. She was the one person with whom he was particularly attached.

Guru Nanak, as a child, remained immersed in his own thoughts and this behaviour caused considerable tension to his father who, quite naturally, wanted his only son to take over his thriving business on growing up.

In order to maintain a modicum of harmony between father and son, Bebe Nanki, on getting married, took her brother with her to her husband’s house in Sultanpur Lodhi and it is here that Nanak spent his growing years. He worked as a manger in the provision store of the local chieftain, Nawab Daulat Khan Lodhi.

Bebe Nanki arranged the marriage of her brother when he was 18 years of age. On 24 September 1487, the marriage of Jagat Baba Guru Nanak Dev Ji and Bibi Sulakhni Ji, daughter of Mool Chand and Chando Rani, residents of Batala in Gurdaspur was solemnised. This auspicious day is traditionally celebrated in Batala every year.

Even at that stage Guru Nanak consistently tried to break old traditions, which tied one to superstition. His to be father-in-law Mool Chand arranged for the Brahmin priests to debate the exact marriage rituals to be followed, Guru Nanak, however refused to follow the marriage rituals of the time. He stated that any time would be an auspicious time for the wedding.

While the discussion was underway at a little distance from Bhai Mool Chand house, the Guru sat beside a Kacchi Kandh (mud wall) and debated the marriage plans with the Brahmin clergy. As the wall was damaged and in poor state, and there had been recent rains, some in the bride’s party thought that it may fall on top of the Guru. An elderly lady was asked by the bride’s family to warn Guru Nanak about the danger. The old woman approached the Guru and warned him of the pending danger from the damaged wall. Guru Nanak just smiled and said “Mata Ji, Ehh Kand Sadiyan Tak Nahee Digdee…”  (This wall will not fall for centuries) 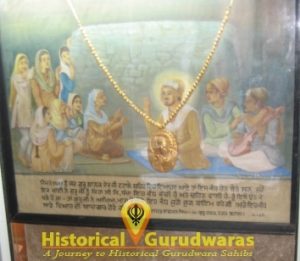 Story of a Wall

The wall has since been preserved within the Gurdwara Kandh Sahib in Batala, and it is here that the wedding of Guru Nanak Dev Ji is celebrated every year. In the current year the auspicious day falls on 25 August.

Guru Nanak Dev Ji preached and later demonstrated by his actions that salvation is reached best through a married family life and worldly pursuits. His teachings also speak of equality for women and the need to nurture their self esteem. His wife, Bibi Sulakhni Ji understood that her husband was a great saint and supported his mission despite great difficulties to her own self. She was a true Sikh as his disciple and participated actively in all activities like singing of Kirtan (holy Hymns) )and  doing Seva (Work) in the Langar (community kitchen)

Guru Ji advocated shedding of superstition and unnecessary rituals. He told his disciples to seek oneness with the Almighty while leading Grihist Jeevan (family life). He further gave to his disciples the edict of “Naam Japo, Kirat Karo, Vand Chako” (Remember the Almighty, work hard to fulfil worldly duties and share what is yours with fellow humans)