You are here: Home / Areas of Study / Social & Cultural Studies / Veer Bal Diwas: The context and the legacy
Share 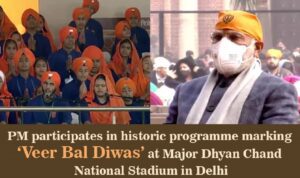 On 9 January, 2022, the Prakash Purv (birthday) of Guru Gobind Singh, Prime Minister Narendra Modi declared observance of 26 December as “Veer Bal Diwas” (Children’s Day) to pay tribute to the unparalleled sacrifices made by the younger two sons of the Guru, Sahibzada Zorawar Singh and Sahibzada Fateh Singh (also referred to as Chotey Sahibzade), for the sake of justice and freedom. The declaration soon found government sanction in the form of a gazette notification issued by the Government of India, Ministry of Home Affairs. Earlier Children’s Day was celebrated in India on 14 November to mark the birthday of Jawaharlal Nehru, the first prime minister of independent India.

In Sikh religious history, “Shaheedi Week” from 6 Poh to 13 Poh Birkarmi (that roughly coincides with 21-22 December to 27-28 December in the western calendar) marks the epic Battle of Chamkaur; the heroic falling in the battle of Sahibzada Ajit Singh and Sahibzada Jujhar Singh, the elder two sons of Guru Gobind Singh; the  martyrdom at Sirhind of the Chotey Sahibzade and Mata Gurjar Kaur, the mother of Guru Gobind Singh.

The Saheedi Week has been observed with reverence and piety in Punjab since the time of its occurrence. In times gone by, no marriages and festivities were held mostly through the month of December and particularly during the Saheedi Week. The merciless murder of the Chotey Sahibzade by the barbaric Muslim regime that left a deep impression on the collective psyche of the people of Punjab and mainly the Sikh community, is observed with utmost devotion and respect.

26 December, 2022, marked the first observance of Children’s Day in its revised format of Veer Bal Diwas.  The observance was spread across India with the main function being held at Major Dhyan Chand National Stadium, Delhi, and attended by Prime Minister Narendra Modi. It included a march past by 3000- school children and recitation of Shabd Kirtan (Sikh Hymns) by 300 Bal (Child) Kirtanis.  Sardar Bhagwant Singh Mann, chief minister of Punjab, rose above party lines to become a part of this sombre ceremony.

The occasion found resonance across the nation and the world at a level not  seen earlier. A digital exhibition, curated by the Government of India to showcase the courage and sacrifice of the Sahibzade, was made available to a large number of universities/colleges and other institutions. It was run in several locations across the country over a number of days. Many competitions like the Veer Bal Diwas Quiz Contest and Veer Bal Diwas Essay Contest on the topic – The Martyrdom of the brave sons of Guru Gobind Singh, were organised in which millions of school going children participated and were given certificates of participation. Thousands of seminars and discussions were organised at District and lower levels which witnessed massive participation. Observance of this day at the national level has given to it a new impetus in the national sentiment which is a step in the right direction, welcomed by one and all.

The Akal Takht, the highest temporal body of the Sikhs, chose to pass a resolution demanding that the day be celebrated as the “Sahibzade Shahadat Diwas.” In an unfortunate development, the SGPC issued a statement opposing the government’s move and appealing to the Sikhs to be aware of “the conspiracy to undermine Sikh history.” In a democracy every person/institution has the right to express an opinion. To that extent it becomes incumbent to study the  context of the resolution that the Akal Takth has passed. 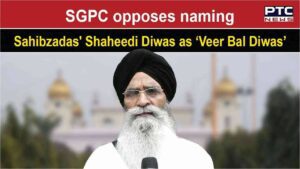 The first step would be to understand the nomenclature and scope of Children’s Day. It is a UN sponsored international event celebrated on different dates by several countries. The day selected invariably marks a significant event in the country. At the international level too Children’s Day is celebrated on 20 November to commemorate the Declaration of the Rights of the Child by the UN General Assembly. The objective is to promote mutual exchange and understanding among children and to uphold the ideals of the UN Charter for welfare of the world’s children.

Observance of the martyrdom of Chotey Sahibzade as Children’s Day gives it an international signature. More and more people will get to know about the chronicle which, in turn, will  benefit humanity. In case it is observed as Sahibzade Shahadat Diwas then its scope remains localised as has been the case till date.

For many years there had been an aspiration within the Sikh community and admirers of the Chotey Sahibzade to see the national Children’s Day being observed on the day of their martyrdom. There was no scope of this change being brought about under Congress rule, hence, the demand picked up momentum only when the BJP came to power.

On January 16, 2018, The Delhi Shiromani Gurdwara Management Committee (DSGMC) held a conclave under the aegis of the Shiromani Akali Dal (SAD), which controlled DSGMC at that point in time. It was attended by Sukhbir Badal, now President of the SAD.  The conclave accepted the need to request the Government of India to consider the feasibility of changing the notification of the national Children’s Day from 14 November to 26 December. Later, in the same year, sixty Members of Parliament  also requested Prime Minister Narendra Modi to designate 26 December as Children’s Day. The proposal  was subjected to many discussions and culminated on 9 January with Prime Minister Narendra Modi agreeing to the same.

Now, because of  the change in the political equation between the SAD and BJP, the SGPC is retracting from its own initiative. The situation reinforces the lack of autonomy within the august institution which impinges on its capacity to take independent  decisions. It is very sad to note that the SGPC, which was formed as a voice of Sikhs has become the mouthpiece of a particular political family and a single party.

Most of the Punjabi/Sikh intelligentsia and civil society feel that the Government has done well by naming the event as Veer Bal Diwas, since the name will find acceptance among different communities across the country and the world since it is simple and not difficult to pronounce. It will create awareness about the nobility of the Sahibzadas on a wider platform. The objection, many feel, is myopic and engineered to serve vested political interests of a few; it has nothing to do with the interests of the Sikhs.

In this initiative the objective is to educate other communities along with the Punjabi’s  and the Sikh’s. SGPC could continue to observe the day as Sahibzade Shahadat Diwas since observance of the significant day on multiple platforms will give it more visibility and serve the purpose better.

In his address to the Nation during the ceremony organised in Delhi for observance of Veer Bal Diwas, Prime Minister Narendra Modi lauded the sacrifice made by the Sikh Gurus and particularly by Guru Gobind Singh and his  family as a triumph of spiritualism over state terrorism by a repressive and deceitful regime. “Any country with such a glorious history must be full of self-confidence and self-respect, however, concocted narratives are taught to infuse inferiority. There is a need to get free from the narrow interpretation of the past to move forward,” he said. Chief Minister Bhagwant Mann, in the same function, mentioned that more steps towards  perpetuating the glorious legacy of the Sikh religion need to be taken.

Veer Bal Diwas is a very strong platform to build upon a national character that is infused with the spirit to stand up for all that is just and righteous . It has the potential to transform the youth by inculcating a spirit of sacrifice among them. It will help uphold our rich legacy and national identity. It is in this contest that the initiative needs to be viewed.

(Jaibans Singh is a social worker and author)