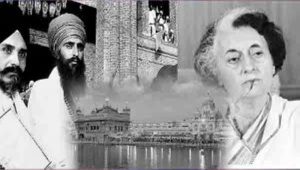 A military assault code named Operation Blue Star was carried out by the Indian security forces on the holiest Sikh Temple, Harmandir Sahib, over seven days from June, 1, to June, 7, 1984. It is referred to by the Sikhs as the Teesra Ghallughara (Third Genocide/holocaust of the Sikhs), the first two having taken place in 1746 and 1762 respectively when the Afghans encircled Sikhs, including women and children, and massacred then without remorse.

Purportedly, the assault was carried out to clear the Temple of Sikh militants led by the religious leader, Sant Jarnail Singh Bhindranwale, who had taken refuge there. It was said that the attack was imperative in view of political pressure with members of both houses of Parliament demanding his arrest.

It is now being argued that there was no case against Sant Bhindranwale in any court and nor was any charge sheet filed against him, hence, such drastic action and unprecedented violence to arrest him was extra-constitutional, Illegal and unwarranted.

Two additional factors stand out in the unfortunate attack. First, the misplaced confidence of the Indian Army that it would be able to extricate Sant Bhindranwale and his followers within a short period of time with negligible casualties. Second, the belief held by Sant Bhindranwale that the Government of India would not dare to order an attack on the holy Harmandir Sahib. Both parties were terrible wrong in their assessment and the result was utter destruction and devastation.

Sant Bhindranwale and his followers holed up inside the temple were killed, as were many innocent civilians who had gone to pay obeisance at the Temple and got stuck there when the action started.

The near total destruction of the holy precincts and the many casualties left a deep negative impact on the psyche of the Sikhs who already harboured great distrust and suspicion against the incumbent Government.

Instead of resolving the problem, the assault created a bigger issue. Within five months came the gruesome assassination of Prime Minister Indira Gandhi on 31, October, 1984, by her Sikh bodyguards, Satwant Singh and Beant Singh and the absolutely terrible anti-Sikh riots across the country that followed. Militancy in Punjab continued for many years and took lives of thousands of young Sikh boys, security force personnel and innocent civilians before abating.

It is not without reason that the assault is referred to as a holocaust by the Sikhs, total reconciliation continues to evade them even after 36 years of the incident having taken place.

The assault on Harmandir Sahib was a by-product of the Khalistan movement, a Sikh nationalist initiative that aspired to create an independent state for Sikh people. A few years before the operation, militancy as a part of the Khalistan movement had gained firm roots in Punjab and Sant Bhindranwale was its most prominent face, mainly due to his vituperative utterances and extreme views.  Initially, he set an agenda of getting the the Anandpur Sahib Resolution passed, but, here he met with a road block since the Indira Gandhi Government considered it to be a secessionist document. Having failed in the political mission, Sant Bhindranwale declared creation of Khalistan by use of force if necessary as the primary aspiration of all Sikhs.

On 24, April, 1980, Baba Gurbachan Singh, the chief of the Nirankari sect was murdered. His sect had, for long, been at loggerheads with the Damdami Taksal headed by Sant Bhindranwale. On 9 September 1981, Lala Jagat Narain, the founding editor of the newspaper Punjab Kesari, was murdered. He was viewed as a supporter of the Nirankari sect and had written several editorials that had condemned the acts of Bhindranwale.

While Sant Bhindranwale was within the Harmandir Sahib, violent activities in Punjab remained unabated. On 23, April, 1983, Punjab Police Deputy Inspector General A. S. Atwal was shot dead by a gunman from Bhindranwale’s group as he left the Harmandir Sahib compound. On 12, May 1984, Ramesh Chander, son of Lala Jagat Narain and editor of the Hind Samachar media group, was murdered by pro-Bhindranwale militants.

The Government was keen to see Sant Bhindranwale arrested and necessary orders, whose sanctity continues to be questioned, were passed on 19, July, 1982. Bhai Amrik Singh, the President of the All India Sikh Students Federation from Damdami Taksal and one more associate were also to be arrested along with him. These orders led to a Dharna (protest) by many Sikhs outside the residence of Deputy Commissioner, Amritsar.

To evade arrest and on recommendation of Akali leaders like Harchand Singh Longowal, Sant Bhindranwale came into Harmandir Sahib Complex and took residence in Guru Nanak Niwas with about 200 of his well armed followers. Every day a group of 51 Sikhs would go to the Government offices and court arrest. By 4, August, 1982, the Akali Dal had also joined this movement and it got the shape of a “religious war.” The group changed many facets from 19, July, 1982 to 01, June, 1984 when the assault on the holy shrine took place. Some Sikh leaders like Harchand Singh Longowal did attempt to negotiate the arrest of Sant Bhindranwale but they did not succeed due to inflexible positions taken by both sides. 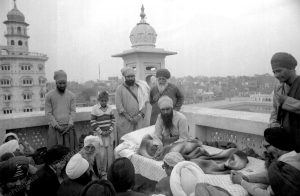 The Government looked at several options including a possible covert operation to abduct Sant Bhindranwale from the Temple premises and sending a senior politician, PV Narasimha Rao, as a negotiator to work out the arrest of the Sant. The efforts did not bear any fruit. On 26 May, 1984, senior Akali leader Gurcharan Singh Tohra informed the government that he had failed to get Bhindranwale to agree to a peaceful resolution.

Another big reason for the Government to take such a drastic decision was that Pakistan was steadily increasing its involvement in the state, in the military as well as the psychological domain. Intelligence reports suggested that Pakistan was poised to render help not only in provision of weapons and ammunition but also manpower smuggled across in the garb of freedom fighters.

It is widely believed that the aforementioned factors cumulatively became the trigger of the plan to assault the Temple to flush out Sant Bhindranwale and his followers. Of course, the confidence exuded by the Army of flushing out the “rabble” in a short period of time with little casualty played a major role in convincing Prime Minister Indira Gandhi to give a green signal.

The manner in which the environment was evolving made it very clear to the militants holed up in the Temple complex that they would need to protect themselves, at least, till the time that Sikhs across the country rose up in revolt and a truce could be negotiated. The Temple complex was therefore converted into a veritable modern day fortress. The job was done primarily by a Sikh General of the Indian Army, Major General Shabeg Singh, who had been cashiered from service. He was known to be the military mastermind behind the training of Bangladeshi revolutionaries (Mukti Bahini). The senior military commanders who planned the assault should have kept this very significant factor in mind, sadly, they did not. Requisite armament, including anti-Tank weaponry, was procured from Pakistan and smuggled into the complex over time. The Sant and his followers were, as such, absolutely ready for what the Indian Army would throw at them.

There are many versions of the sequence of events that followed the launch of Operation Blue Star. One version in the open media domain is given here. It may or may not be totally authentic but is considerably acceptable.

The overall operation was sub-divided into three parts:-

In the preliminary phase, about seven division of the Army were involved in the operation in Punjab itself. These included troops already in defensive posture along the border and necessary augmentation for sealing against a Pakistani misadventure in support of the militants. Sealing was also done all along the LOC and border with Pakistan too.

The Meerut based 9 Division under command of Major Gen. KS Brar (popularly known as Bulbul Brar) was literally rushed in for the actual assault (Operation Metal). Lt Gen K Sundarji was the Army Commander Western Command and in overall command of Operation Blue Star. The Chief of Army Staff was General AS Vaidya.

The operation was carried out under complete media blackout, local curfew and suspension of local transport. Rail, road and air services in Punjab were suspended. Foreigners and NRIs were denied entry. Electricity and water also cut off in the last few days.

The operation started in June 1, 1984, with an attack on ‘Guru Ram Das Langar’ building inside the Golden Temple.  Surprisingly, despite being poised for the assault, permission was given to civilians to enter the Temple on June, 3, to commemorate the martyrdom day of the fifth Sikh master, Guru Arjan Dev Ji. In the evening they were told to leave. It is widely believed that all civilians could not leave the Temple premises when the vacation order was given; they were possibly detained by the militants to be used later as human shields. Who left instead were Sikh criminals and communists who were earlier holed up but then did not have a stomach for the fight.

The final assault took place over two days from June, 5 to June, 7, when the complex was declared free of militants and the killing of Sant Jarnail Singh Bhindranwale announced. 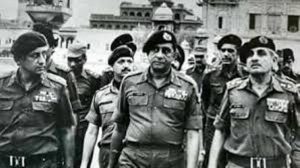 What was supposed to be an assault by professional Infantry soldiers against “rabble” ultimately saw Tanks, Artillery and commandos also being deployed. The return fire from the holed in militants came from anti-Tank rocket propelled Grenades. The Akal Takht where Sant Bhindranwale was located was literally raised to the ground by Tank fire. The Tank stood at close range on the doorway of the Temple complex.

The ill-conceived assault left 493 dead and 236 wounded. The Army suffered a casualty of 83 killed (4 officers and 79 soldiers). It is widely felt that the death toll was much more than what was declared. Not only this, once the temple complex was declared free of militants, President Zail Singh came for a visit and was shot at by a militant hiding within the complex. The bullet hit and army Colonel who was accompanying him.

The operation elicited condemnation by many countries. worldwide criticism and many complaints by Human Rights organisations. The Sikhs worldwide were left devastated. That the operation was carried out during the very poignant period when Sikhs were commemorating the martyrdom of their fifth Guru was even more galling for them. Many Sikh soldiers deserted their units and eminent Sikh personalities returning awards that they had received from the state.

Five years later, the Temple complex was once again cleared of militants by adopting a “blockade approach” as conceived by then Director General of Punjab Police, KPS Gill. The success of the operation, code named Operation Black Thunder, proved that there were alternatives to the outright assault carried out by the army.

Many books and documentaries have been made on the operation. A significant lesson is to try out all possible options before using force against our own people and, when absolutely necessary, limit it to the barest minimum. Better political and military judgment laced with patience while working on a graduated response will always pay better dividends. An incremental use of force compounded by frantic decision making is not the sign of a great and mature nation.