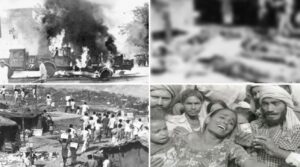 During the Galwan incident when a large number of Indian soldiers died in a skirmish with the Chinese Army in Ladakh, the media widely covered the bravery of a young Sikh soldier, Sepoy  Gurtej Singh, who single-handedly killed 23 Chinese soldiers before himself falling into the river from a height and thus embracing a hero’s death in service of his Nation.

History is replete with numerous such examples of valour displayed by Sikhs while serving the nation, which has catapulted this minority community to great glory. They epitomise unquestioned loyalty to the Nation. The Sikh regiment of the Indian army is one among the most decorated Regiments, not only in India but the entire world.

Sadly, the assassination of former Prime Minister Indira Gandhi, in 1984, by her Sikh bodyguards led to a genocide of unknown proportions as a backlash against the Sikh community. What went wrong in 1984 that the nation forgot all about the historical loyalty and chivalry of the Sikhs? Why were those who  protected India from Pakistani and Chinese aggression after independence and from Mughals, Afghans and the British before independence thus persecuted?

In  the 1984 genocide Sikhs were targeted in India, especially in Delhi, with hatred that has no parallel in our times. This cannot be defined as a communal riot because, for a communal riot, it takes at least two communities to be on a fairly equal footing to fight each other. It was a genocide because of its character of being a one sided massacre. Sikhs who comprise less than 1% of India’s population outside Punjab did not stand a chance against the huge mobs from all communities, who came together under a political agenda to kill, loot, rape or plunder them.

Why is loyalty of Sikh community held at ransom on the basis of the acts of a few misled members of the community? Why does the faith in loyalty of Sikhs sway back and forth like a pendulum?  What was the fault of the poor Sikh cab driver in Kolkata or a daily labourer in Trilokpuri, Delhi that he was brutally murdered? He hardly had anything to do with politics of Punjab? He may, in fact,  have hardly ever visited Punjab? Why was there a tit for tat reaction against the Sikhs that appeared to be some sort of a genome destruction of the community?

Given that the entire Sikh population of India outside Punjab wasn’t wiped out does go on to show that all chemistry wasn’t lost for the Sikhs. Most of the majority community members remained sympathetic towards them. But this still wasn’t enough to prevent the systematic genocide committed by Congress politicians who used the state machinery to achieve their nefarious designs of revenge against innocent Sikhs.

Leave aside politics or assassinations, the fluctuations in the perception of loyalty of Sikhs is visible even in the field of sports. A top class fast bowler’s loyalty was recently put to question due to the drop of a catch in a match with Pakistan. Even though it got restored after few stellar performances he gave later, the fact that the slur was even considered leaves a lot to think about.

The fact that many of the big Congress politicians are still moving scot free goes to prove that their invincibility stems from the tacit state sanction of the genocide which insured them from conviction. The threat of ‘If I go down I will spill the beans and name everyone’ ensured that these goons and gangsters continued to receive state protection under successive Congress governments. Evidence was systematically destroyed so that other governments remained unable to nail the prosecution.

Recently during Covid, the several ‘Langar’ services for food, provision of much needed oxygen and funeral services amongst others resurrected the love and faith for Sikhs in India.Equally, but sadly, it doesn’t take a lot for the pendulum to swing to the extreme opposite side. So the question again arises – why is the loyalty of Sikhs towards his nation always put to test at the drop of a hat? Or a catch? How on earth can anyone justify the loot, plunder, rape and murder of minorities for the act of a few?

In July 2005, London was rocked by a series of bomb explosions in coordinated suicide attacks conducted by Islamic terrorists in the London underground . However there was no major backlash against the common Muslims living in UK by the majority white community. Few incidents of damage to a mosque or mistakenly to a Gurdwara were reported but there was not a single Muslim fatal casualty reported in the UK. Nobody was killed and no burning tyres were placed on anyone’s neck, and no woman was dishonoured.

Decades later also, there were several stray incidents of beheadings of members of the White community by ISIS in Syria as well as in the streets of London by some persons with disturbed and fanatic Islamic mindset. However, there was no systematic or state sponsored counter retaliation towards the Muslim community of UK by any large white mob. Racist remarks may have been made, but it did not spill over as bloodshed into the streets and the households of a common man weren’t affected. One is forced to think – why does this happen so frequently in India, especially to the Sikhs?

Racism as a concept in motion is by no means alien to the UK white mindsets. Then why and where is the difference between the reactions against minorities in India as compared to UK? What accounts for the difference when we compare the scale of counter retaliation against the Sikhs in India compared to that against Muslims in UK? 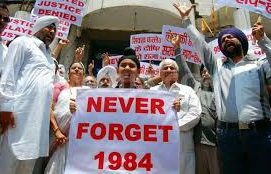 The answer lies in the mob mentality in India as well as state sponsored lawlessness that stopped the Police from curbing the mob movements effectively. The lack of an effective law and order under the Congress rule was the root cause  for failure of the state to protect its own ordinary law abiding innocent citizens.

Congress leaders failed to realise that ‘punishing’ or ‘teaching a lesson’ to the minorities effectively alienated them by perpetuating and embedding a complete divide between communities which had never existed.

Events such as the Sikh genocide in 1984 impel many among the Diaspora to support divisive referendums against India. Many of those coming in the bus loads to support anti-India demonstrations abroad may be those whose families have been victims of retaliation by the majority community or those who are heartbroken at the apathy of Indian authorities.

For the Sikh minorities in India to live in a perpetual atmosphere of insecurity and fear that their treatment at the hands of majority community will be subject to the acts of a few is not an ideal situation. For them to live in constant fear like a guillotine hanging over their heads at the mercy of few rats nibbling at the rope holding the guillotine is not good for their morale and well being. They need not suffer, nor should they be made to explain and prove their loyalty now and again based on stray incidents by few individuals in India or abroad.

Enemy nations, based on the strategy devised by their intelligence agencies to dismember Punjab from India, are orchestrating these divisions since the region has been the traditional thorn that has tilted the outcomes of battles in India’s favour. The mob mindset and opportunist tendencies of some among the majority community that spills into streets as counter retaliation at best serves the interests of enemy nations very well and ensures they have succeeded in their aspirations by putting the final nail in the coffin of community relationships. Quite often, and not surprisingly, many of these mobsters may also be on the payroll of foreign intelligence agencies.

Moving towards a Solution

The solution has to be multi pronged.

To summarise, the leaders and politicians of a nation should ensure that there are robust policies to thwart any divisive intent and to ensure a robust rule of the law. The intelligence agencies of India should be able to understand the game plan of enemy nations.

The intentions of all communities is for a peaceful and harmonious cohabitation. All citizens of a progressive nation are busy fending for their families and for their aspirations. It’s only career criminals and paid fanatics who indulge in anti-national and subversive activities. They have the last laugh when repercussions of their crimes affects others who don’t subscribe to their views.

Prevention of repercussions against minorities helps preserve their loyalty and ensures that they do not cross over to the other side of the fence in rebellion or revenge. Every innocent who is a victim of a hate crime will potentially be driven by a counter revenge motive and this will only fortify the strength of the enemy ranks as well as allow the enemy nations to have the last laugh.

(The author is a United Kingdom based transplant surgeon)