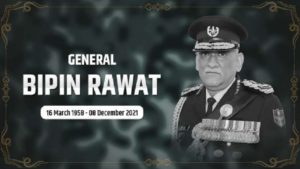 A MI 17 V5  Helicopter was earmarked for onward Journey to Wellington near the hill station of Coonoor in the Nilgiris where the General was scheduled to address the students of Defence Service Staff College (DSSC), Wellington.

The ground staff removed the undercarriage blocks and withdrew; both Rotors of the MI 17 V5 achieved full RPM and started rolling on the runway. Air Traffic Control (ATC) finally gave green signal and the Heli-machine took up towards the foggy Nilgiris at 1147 hours.

The average height of Nilgiri Hills is 7500 feet above sea level. It is famous for the hill station Ottacmund (Otty) also called Queen of the Hills. The distance from Coimbatore is 85 Kms and road travelling time is 3 hours; by air it is just 25 minutes. The Helicopter lost contact with ATC at 1220 hours and crashed in a woody gorge near Nanjappachtiram hamlet, Bandishola Panchyst,  Katteri block, District Coonoor about 20 kms from Wellington and burst in to flames. The general area had thick white fog covering all mountains.

The nearby local Tea Plantation workers rushed to the site of the accident but the high octane fuel fire prevented them from getting close. It was a gruesome sight, some of the passengers were burnt beyond recognition and four were found alive still breathing. The local police was first to arrive and provided first aid. Police also informed Army authorities at Madras Regimental Centre and DSSC. Army Columns reached after one hour and evacuated all dead and injured to Military Hospital (MH) Wellington.

There was suspense in the air regarding the well being of CDS and fellow passengers of the ill fated MI-17. The Nation was stunned and praying for survivors. The official Twitter handle of the Indian Air Force finally tweeted at 1803 hours on 8 December, 2021 to announce, with deep regret, that General Bipin Rawat, Mrs Rawat and 11 other persons on board had died in the unfortunate accident and Group Captain Varun Singh, SC ,was under treatment at MH, Wellington. He has since been shifted to MH Banglore.

As the dead bodies moved out from Tamil Nadu to Delhi , the people gave an emotional farewell. With tears in their eyes they saluted the  Ambulance convoy, showered flower petals upon it  and shouted “Veer Vallkam.” The mortal remains in wooden coffins draped in Tricolour were airlifted from Sulur Airbase at 1600 hours by an IAF C-130 J Hercules and reached Palam Airbase at 1900 hours. Prime Minister Narendra Modi and Defence Minister Rajnath Singh paid floral tributes along with near and dear ones at 2000 hours on 9 December, 2021.

The final Journey of the mortal remains of the General and his wife started from his official residence at Kamraj Road, New Delhi at 1400 hours on 10 December and reached Brar Square Crematorium, New Delhi at 1615 h in a cavalcade of Army Vehicles. Hundreds of civilians ran with the cavalcade carrying the Tri-colour and chanting tributes to General Rawat and the Nation.

At Brar Square crematorium,  Defence Minister Rajnath Singh and Army Chief General MM Naravane laid wreaths along with foreign dignitaries. An all services Guard of Honour with a 17 Gun salute did the last honours;  the last post was sounded at 1645h. The National flags were neatly removed from the coffins and handed over to the two daughters of the General, Kritika and Tarini. The pyre was lit by them and the mortal remains of couple were consigned to flames at 1700 hours. 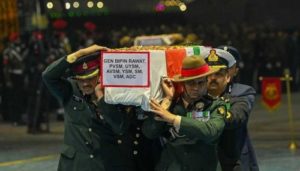 Bipin Rawat was born in Pauri town of Pauri Garhwal district in Uttarakhand on 16 December, 1958. His father was Lt. General Laxman Singh Rawat hailing from Sainj village in Pauri. Bipin studied in Cambrian Hall School, Dehradun, initially, and later went to Saint Edwards School. He joined the National Defence Academy in July, 1974 in the NDA-52 course. he passed out from Indian Military Academy (IMA) in January, 1978 with the 63rd regular Course and was awarded the prestigious “Sword of Honour.”

He was commissioned into the 5th battalion of 11 Gorkha Rifles (5/11 GR) as parental claim since his father also belonged to the same unit. In 1987, as a Captain, he was deployed at a forward post  in Sumdorong valley with his battalion during  the Sino-Indian skirmish in Arunachal Pradesh. He commanded a Rifle Company in Uri Sector in Kashmir and went on to command his unit, 5/11 GR, in the Kibuthu Sector (Walong) on the Line of Actual Control. Later, he took over as 5 Sector Commander, Rashtriya Rifles at Sopore Kashmir,  a hot bed of militancy.

He was selected to command a Multi National United Nations Brigade (MONUSCO) in the Democratic Republic of Congo. He protected Goma ,capital of North Kivu in DP of Congo, saved a massacre and brought the main insurgent group into the main stream in May, 2009. He was twice awarded UN Force Commander Commendation.

He was promoted as Major General and was appointed as General Officer Commanding, 19 Infantry Division  deployed on Line of Control in Baramulla, Kashmir. He also served as Major General, General Staff (MGGS) at Eastern Command. He took over 3 Corps on promotion to Lt. General and operated in Insurgency Infested Manipur and Nagaland.

There was an ambush by National Socialist Council of Nagaland (Khaplang Group) and PLA in Chandel District in Manipur in June, 2015 in which 18 Soldiers were killed. As a riposte to the ambush, General Rawat oversaw the first cross border surgical strike into Myanmar. Helicopter borne Special Forces raided two insurgent camps and killed about 100 insurgents deep with Myanmar territory.

On 24 December, 2019, the present government approved appointment of Chief of Defence staff (CDS) as recommended by the Kargil Review committee. He was to be a four star General and permanent chairman of Chief of Staff Committee while also being designated as Secretary of Department of Military Affairs. General Bipin Rawat was appointed by Government of India as the first CDS.

He advocated Tri-services Theatre Commands for dealing with two hostile neighbours.  The Galwan Clash in Ladakh on LAC in June, 2020 almost triggered another Indo-China War. The Joint response under the leadership of General Rawat mobilised Army, Air force and Navy at a fast pace. All posts on the LAC were reinforced by Special Forces flown in the C 17 Globe Masters and C 130J Hercules of the Indian Air Force. SU 30MK 1 and Jaguars made hundreds of sorties day and night while the Navy carried out strategic deep reconnaissance missions to detect Chinese deployments. This was the vision of General Bipin Rawat. China was taken aback by the speedy deployment. The status quo could not be altered.

Bipin Rawat will be remembered for taking the first steps towards modernisation, indigenisation and joint theatre command concept for the Indian Armed forces. The new concepts pose a different challenge. It is hoped that the work done by General Bipin Rawat in these crucial areas will be carried forward. In remembrance of the General a quote from the Bhagwad Gita comes to mind where Krishna tells Arjun

Do not lament the death of a warrior killed in the battlefield/line of duty as those who sacrifice their lives in  battle field are honoured in heaven.

Adieu for ever… General. the Nation salutes you. You will remain in our memories forever.