You are here: Home / Areas of Study / International Perspectives / Afghanistan and Taliban: The Pakistani perspective
Share

Much has been written and talked about with regard to the situation in Afghanistan. In India, the role of Pakistan has been discussed in great detail. It would be interesting to analyse what is being said about the Afghanistan situation in Pakistan. This article will attempt to cover the Pakistani perspective on the basis of inputs available in Pakistani media.

Pakistan continues to position itself as an aggrieved party that has suffered immensely as a consequence of assisting the US in the Global War on Terror (GWOT). On 5 June, about a month before the Taliban takeover, the Pakistani leadership, including Pakistan Prime Minister Imran Khan and the all important General Qamar Bajwa, held a crucial meeting in which a distinct anti-US tone and tenor was adopted. The leadership reiterated that it would “no more” assist the US since “Pakistani lives cannot be taken for granted.”

Later, Prime Minister Imran Khan, in an interview given to an Australian Journalist, Jonathan Swan, stated that Pakistan would “absolutely not” allow the US to use any Pakistani base for any action inside Afghanistan. Once the US drawback gained momentum, certain commentators in Pakistan publicly humiliated the US by saying that the situation represented, “a tragic drawdown of the world’s lone super power at the hands of a rag-tag militia’s highly relevant ways of war.”

The writing on the wall is very clear – the Pakistani leadership had put all its eggs in the basket of China and the Taliban much before the Taliban moved in to take over Afghanistan. The anti-US posture is part of a “Grand Strategy” worked out by Pakistan with its new partners – Russia, China, Turkey and Taliban.

The more vocal and pragmatic among Pakistani commentators like Najam Sethi were critical of the manner in which the Pakistan Army along with the ISI were dictating policy on Afghanistan and literally thrusting it down the throats of the Pakistani people through the pliant Government.  “Foreign policies should not dictate how the nation will run. If there is a nation there is an establishment not the other way around. There is a need to remove the hybrid system created by the Army and get the nation together,” said Sethi in an interview.

On August 17, PM Khan and General Bajwa met prominent Taliban leaders in Pakistan. Pakistan invited the non-Pashtun leaders also in what it portrayed as an effort to seek a broad-based consensus. Post the meeting Pakistan emphasised that it would do everything for an “inclusive settlement” of the Afghan conflict. Thus, despite the belligerence, Pakistan hopes to keep the US and the West on its side by leveraging its bargaining chips in bringing the Taliban to the negotiation table. It wishes to maintain its relevance internationally.

However, while talking of inclusivity Pakistan remains quite dismissive of the previous regime. It calls Ashraf Ghani and Amrullah Saleh puppets of America who desperately tried to delay and cancel the American withdrawal. Apparently, the resistance being organised by Saleh will meet with opposition from Pakistan. 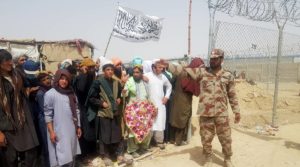 Celebration in Pakistan over victory of Taliban in Afghanistan

On August, 19, Pakistani media reported with a certain degree of glee that Taliban had announced the creation of the Islamic Emirate of Afghanistan on the 102nd anniversary of the country’s independence from British rule. This statement came when the US was accusing the Taliban of reneging on its pledge to allow Afghans who worked with the United States and its allies to move out of the country.

Pakistan is going quite overboard to prove that the Taliban will be a good, benevolent regime. The ‘new’ Taliban is different from the old; women’s education and right to work will be uninterrupted; the media would be allowed to operate independently are some of the points being incessantly highlighted by the Pakistan media.

Pakistan says that it will recognise the new regime in Afghanistan after consultation and consensus with “all neighbours of Afghanistan” but importantly China and Russia. For international consultations it names Turkey. Apparently Pakistan, while dealing with Talibanised Afghanistan, will not keep the sensitivities of India, the US and the West into consideration.

Pakistan is going to great lengths to prove to the world that it is tied to Afghanistan because of the, “dictates of terrain and  for housing over five million refugees many of whom now call Pakistan home.” It is speaking of bilateral trade worth hundreds of millions of dollars which it says has already started post Taliban control. “Today, many trucks loaded with fresh fruit (from Afghanistan), were cleared at Customs House Chaman,” said a senior Custom Officer of Pakistan on August, 19.

Pakistan also wants the Taliban to remain totally isolated from India. “Pakistan hopes the Taliban will not allow the use of their land against Pakistan and any other country,” said a statement emanating from the Pakistan Foreign office; the reference was so clearly towards India. This apart, Pakistan is going overboard in projecting India as a villain of the piece. On 20 August, Foreign Minister Shah Mahmood Qureshi said that certain ‘anti-peace’ elements were active to play the role of spoilers and it is a test of the Afghan leadership to cope with such challenges. In time, the Taliban will like to retain autonomy in its foreign policy; the contradicting ambition of both countries will be of interest in the future.

To sum up, the situation in Afghanistan is the creation of the ISI under supervision of the Pakistan Army. The Afghanistan policy of Pakistan, as such, is dictated by the Pakistan Army and the ISI; it has an outright military connotation with a pro-China/Russia/Turkey bias. It goes against the interest of India and the West. In simple words, the Pakistan Army wishes to control Afghanistan. Pakistan’s talk of inclusivity in governance in Afghanistan is eyewash; it is looking for a pure and pliant Taliban Government. To this effect it is using its captive media machinery to project the Taliban as “new and reformed.” Pakistan will do all it can to keep India out of Afghanistan for which reason it will keep Iran at an arm’s length too. Ultimately the Pakistan army will use Afghanistan as a strategic asset against India to the extent of proliferation of terror in Kashmir, increase in drug supply to Punjab and creation of Jihadi cells across the country.

(Jaibans Singh is a geo-strategic analyst)