You are here: Home / Religious Studies / Akal Takth and the concept of Miri and Piri created by Guru Hargobind Ji
Share 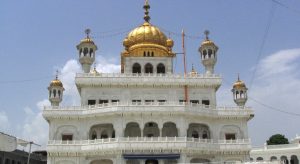 Much before his martyrdom, Guru Arjan Dev Ji was well aware of the need for the Sikh community to develop a body of dedicated warriors who would become guardians of the oppressed, fight for justice and righteousness and protect their nation and people against repressive powers. It was with this thought in mind that he decided to train his son, Hargobind, who was very young at that point in time, in martial arts.

The responsibility for the same was given to Bhai Budda. Bhai Budda should not be confused with the saintly old Baba Buddha Ji who possessed no such skill. He was a Sikh skilled in soldierly qualities  and proficient in the use of arms.

Guru Arjan Dev Ji also impressed upon his son the need to build a viable force for self defence within the rapidly expanding community. He probably took these steps due to a divine realisation that he would not be in a position to carry forward the evolution of the community beyond the the massive task of compiling the holy Granth and they would fall on the young shoulders of Hargobind.

When the summons came from the Mughal Court for Guru Arjan Dev Ji, he knew that he would not come back. Before leaving, he declared on 25, May, 1606, that young Hargobind, would be the next master of the Sikhs.

Guru Hargobind Ji, though very young, completely understood what his holy father required of him. During the initiation ceremony itself, he requested Baba Budha Ji to adorn him with a sword rather than the Seli (silk cap) of Guru Nanak Dev Ji as was the tradition. It is said that Baba Budha Ji, who knew nothing about swords, put the sword on the wrong side; Guru Hargobind Ji then requested him to put another sword on the other side and thus started the tradition of his wearing two swords This created the concept of Miri and Piri, implying that henceforth both religious and temporal power would remain vested upon the Guru.

The first step taken by Guru Hargobind Ji was construction of a seat of Temporal Power of the Sikhs. It came up on 15 June 1606, on a high ground opposite the Hari Mandir in the form of a 9 to 11 foot tall platform called the “Akal Bunga.” On this throne like structure sat Guru Hargobind Ji along with Bhai Gurdas and Baba Buddha Ji and held court. He received petitions and dispensed justice. The temporal nature of the Akal Bunga balanced the spiritual nature of the Hari Mandir, thus cementing the concept of Miri and Piri. The building is now a five storey structure with a marble inlay and gold leafed dome and is called the Akal Takht. It is the most important of the five Takhts of the Khalsa community. 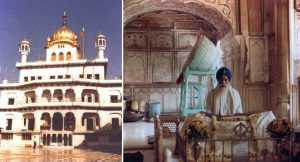 Recitation of Gurbani in Akal Takth

Having created the seat of Temporal Power, the young Guru and his dedicated advisors set about strengthening the defences of the holy city of Amritsar. The city was walled and a small fortress named “Lohgarh” was constructed in the outskirts. The Guru initiated his own flag and war drums that were beaten twice a day.

Then began the arming and martial training of the Sikhs; the Guru himself was adept in the use of arms and an avid hunter. Martial Vaars (ballads of heroism) were composed and sung in the Court on a daily basis. The heroic deeds of Sikhs were commemorated. With time the Guru had, under his command, seven hundred horses and considerable Infantry.

Thus, within a few years of becoming the sixth master of the Sikhs, Guru Hargobind was well poised to fructify the dream of his holy father of reconstitution the Sikhs as a separate Nation. The seed was sown even though the tree took almost two centuries to grow to its full potential. It is important to note here that to further the concept of nationhood, the Guru adopted all trappings of royalty, but deep within, and in his own words, he remained a simple ascetic and servant of the Sikhs.