You are here: Home / Agriculture / Are protesting farmers putting Punjab on a regressive path ?
Share 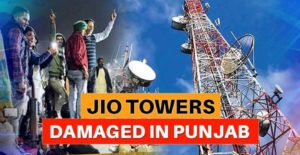 As a group of building owners who have rented their premises to Reliance Industries for operating its various businesses across Punjab, last week sought the intervention of Chief Minister Amarinder Singh for helping them reopen their stores which have been under siege by protesting farmers for the past several months, a new dimension to the ongoing protest came to the fore. A dimension about which there has been whispering in the state, but nobody could articulate it publicly. It is all about the economic or other adverse consequences that the farmers’ protest has accrued to the state of Punjab.

The property owners, all local Punjabis, apprised the chief minister of the deep financial crisis they were in and were getting pushed to bankruptcy as they have not been getting any rental income for the past 7-8 months because all the Reliance retail outlets have been forcefully shut down by the protesting farmers.

It’s not about the Reliance only. It’s about the entire corporate sector that has been a bulwark of the state retail economy and provides employment primarily to the youth from the rural areas. Directly or indirectly, according to an estimate, the corporate sector, engaged in different consumer activities, provides employment to about five lakh youth in the state. A large chunk of them is likely to be thrown out of jobs in due course if the situation persists.

Reliance has around 275 stores in Punjab and all of them are shut. Similar is the fate of other corporate houses. It is not to suggest that farmers should not air their grievances and hold protests. By all means, they have a right to protest against whatever they find is not in their interest. But should their protest hit the state economy, particularly the youth that finds new avenues of employment in the corporate sectors?

“We are bearing losses in crores as the buildings are on loans from banks and we have to bear the burden of huge EMIs, municipal taxes, electricity and water charges, etc. Moreover, the livelihood of lakhs of workers, employees and their families has also been adversely affected,” said one of the building owner after presenting a memorandum to the chief minister office last week.

He added that “farmer leaders warn us of severe consequences if we open the stores. We have even approached the district police and other local authorities but in vain. We have also met Samyukt Kisan Morcha (SKM) leaders and Kisan Jathe Bandeyaan a couple of times and raised our concerns but to no avail.”

As per the agreements with the company, no rental payment can be made to the owners in case there is no billing or the store is closed due to agitation. “We are all Punjabis and fully support the farmers, but such forced closure of stores is only harming Punjab,” the memorandum said.

No corporate would be interested to invest in the state if they are not allowed to operate peacefully.

One of the store owners, Nirmal Singh, from Jalandhar, said, “We have borrowed loans and invested all our hard-earned money in the properties, but such forced closure is ruining us.” He added that the stores are open in all other states, but in Punjab, farmers are not allowing to open even those stores which are under essential services, so we are here to request the CM for help.

“We also appeal to the farmers’ associations to carry on their protest peacefully against the government but allow the stores to run as usual,” he added.

“Reliance Industries Limited (RIL) has already said in a regulatory filing that it has no plans of entering the contract or corporate farming, and it has not purchased any agricultural land in India for the purpose of contract farming,” said Manav Sandhu from Tarn Taran.

Incidentally, the corporate houses targeted by the protesting farmers have nothing to do with the agriculture bills. All their infrastructure in the state had come up much before the bills were passed. And that infrastructure added to the growth of the state’s economy which the farmers are now overlooking completely.

It was too surprising when the protesters destroyed the mobile towers of reliance all around in the state. In the present context when mobile towers are the only means of communication not only within the country but also with our overseas friends and relatives, the destruction of towers looked such a regressive step coming in a state which had ushered in the green revolution and had taken big strides to connect overseas.

Blocking roads and rail traffic has also sent adverse signals to the investors looking for pastures in Punjab. In the backdrop of blood-soaked militancy days, such disruptive protests would only go a long way to keep the investors at bay. No wonder whatever promises investors make during the Punjab Investors’ summits, nothing much comes back to the state in terms of investment. All such developments leave the Punjab youth at crossroads. Will the protesting farmers look at this side of their agitation?