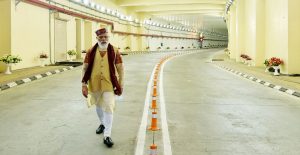 On Saturday, 03 October, 2020, Prime Minister Narendra Modi inaugurated the Atal Tunnel. It holds huge strategic and social significance for the country and specifically for Himachal Pradesh and the Union Territory of Ladakh.

The Atal Tunnel will reduce the road journey from Manali to Lahaul- Spiti and onwards to Ladakh by at least four to five hours. More importantly, it will enhance all weather connectivity to Ladakh and thus mitigate, to a great degree, the challenge of logistic build up for both military and civilian purposes .

The Atal tunnel has added to the viability of Rohtang axis and positioned it as the main feeder for Ladakh. The earlier movement of stores, stocks and troops from Pathankot to Tandi (near Keylong) was a three days journey one side; due to the tunnel it has been reduced to two days. The overwhelming impact of the reduced turnaround time needs no emphasis. Henceforth, “winter stocking” for Ladakh will not remain as big a nightmare for the Indian Armed Forces as it has been since independence.

In addition, the tunnel will be a boon to the residents of Lahaul-Spiti who remain cut off from the rest of the country in winters for nearly six months due to heavy snowfall. It is also expected to give a big and very welcome boost to tourism and winter sports in both Himachal Pradesh and Ladakh.

It is notable here that the Indo-China War of 1962 was lost by India not because of lack of  bravery of its soldiers or force deployment but because of an inability to meet the logistic requirements. Much has, of course, improved after that. The opening of the tunnel is a very big step towards achieving fool proof logistic capability. This, by itself, reflects the huge strategic dimension of the project.

The 9.02 km-long-tunnel, built by the Border Roads Organisation (BRO) is an engineering marvel. Located at a breathtaking altitude of a little more than 3,000 metres (10,000 feet) above sea level, it is the world’s longest highway tunnel. Cutting through the mighty Pir Panjal range of the Himalayas under the Rohtang Pass, it boasts of  ultra-modern specifications. It is horseshoe-shaped with an overhead clearance of 5.525 metres and a single-tube double lane configuration supporting a roadway of 8 metres. The south portal of the tunnel is located 25 km from Manali and the north portal is located near village Teling, Sissu, in Lahaul Valley. It cuts 46 km between Manali and Leh and the travel time by about 4 to 5 hours. 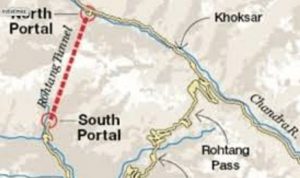 The tunnel has been so named since it was envisioned by Shri Atal Bihari Vajpayee when he was prime minister of the country. The decision to construct the strategic tunnel was taken by the NDA-1 Government on June 3, 2000, and the foundation stone for the access road to the south portal was laid on May 26, 2002. It is sad to note that the project progressed at a snail’s pace till it was given a strong push by the NDA-II Government post 2014.

In his inaugural address, Prime Minister Narendra Modi said, “Atal tunnel will give new strength to India’s border infrastructure. It is an example of world-class border connectivity. There have been demands to improve border infrastructure but for a long time, such projects either could not get out of the planning stage or got stuck midway.” “…. People who live in the mountains would know the significance of cutting down travel time by four or five hours,” he added.

The great significance of the Atal Tunnel gets reinforced by the fact that it has invoked great displeasure from China. As usual, the misinformation campaign was spearheaded by the Global Times, the biggest propaganda tool of the Chinese Communist Party (CCP). An article titled, “Atal Tunnel to have limited benefit to India in wartime’, written by some Song Zhongping admits that, with the opening of the Atal Tunnel, Indian troops can be deployed quickly on the border and transportation of military supplies can also go through. The propaganda starts beyond this admission. He goes on to say that, “The Chinese People’s Liberation Army has the means to make this tunnel unserviceable. It is better for India and China to coexist peacefully with each other. India should restrain itself and refrain from provocation as no passage exists that can enhance India’s combat capability.”

The obtuse and graceless article clearly proves that the Chinese are totally disconcerted with the development and more so since it comes at a time when India has taken a firm stand along the Line of Actual Control in Eastern Ladakh. The report also says that New Delhi has identified 73 strategic roads along the China-India border that they will continue to build throughout the winters.

Undoubtedly the Atal Tunnel will be a game changer for the Indian Army particularly in the current scenario of clashes between the Indian and Chinese military in Ladakh. Logistically, it has put the Indian Army in a highly comfortable position.

There is, however, a need to further enhance connectivity. The building of a tunnel at the Zojila Pass in Jammu and Kashmir-Ladakh region should be taken up on priority. Even on the Rohtang axis full all-weather connectivity can be ensured only by building tunnels to negotiate the Baralacha, Lachung La and Tanglang La passes. Definitely, experience gained in this project will make future projects easier. What is required most is the political will.