You are here: Home / Areas of Study / Governance & Politics / Beware: The present situation is ominous repeats of historical blunders
Share 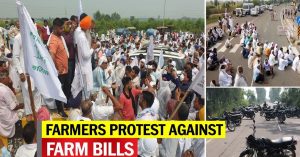 Stopping the agitating farmers, especially of Punjab, at all entry points to Haryana is the repeat and reminiscent of the 1980s days when the then agitating Akalis on the way to Delhi were obstructed, harassed, and bullied by the Haryana authorities to please then Prime Minister Indira Gandhi.

Please note that while the blockade at Haryana borders is a repeat of 1980s, at the same time, the situation of “blow hot blow cold” between the Congress led by Captain Amarinder Singh and the Shiromani Akali Dal led by the Badal family is also akin to and a repeat of the then deep rooted rivalry between Darbara Singh and Zail Singh

One can, under the circumstances, only hope and pray that the end result of these rivalries and feuds is also not a repeat of the terrible lawlessness that was witnessed in those times.

Again, in this war of rights between Kissani (farmers) on one side who feel that their farms are under danger of being overwhelmed by corporate forces and the Government on the other side that is perceived to be intent on snatching from farmers their fundamental right to property, there seems to be another repeat of the times of  the face-off between Jai Prakash Narayan and the then prime minister, Indira Gandhi. Jai Prakash Narayan it may be recollected took up political cudgels against then Prime Minister Indira Gandhi on the basis of righteousness and justice and forced her to declare emergency in the Nation leading to a black chapter in the history of free democratic India.

There are already bards repeating the famous lines of the poet, Shah Mohammad who said “Jang Hind/Punjab Da Hoon Laga,” (War between Hind and Punjab is commencing).

The present situation impacts farmers across the Nation but the farmers of Punjab have chosen to take the lead. Be that as it may, the repeats come with bad and negative forebodings that the present Government should be aware of. It should tread very carefully and with utmost caution. The situation has the potential of putting paid to the ushering of “Ram Raj”  that is so close to the heart of the incumbent government.

It would not be out of place to suggest that the people are now quite aware of the political double speaks and have realised that all talk of their welfare and interests is no more than a hoax. They well realise that politics are now a full-fledged occupation, far removed from the high ideological platform on which they earlier stood. The whole game is centred around the gaining and retention of power. Hence they are not likely to be conned by mere words and rhetoric, they will not desist till they get what they want.

(Author is a retired IAS officer)