You are here: Home / Areas of Study / Social & Cultural Studies / Break free the Punjabi youth from the clutches of drugs
Share 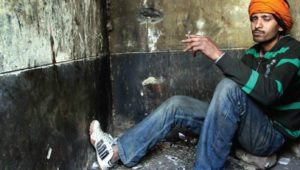 Drug addiction is a menace is on rise worldwide and India is no exception. Given the high population levels in the country the scale of the problem is enormous and worrisome.

The increasing dependency on drugs  is posing the challenge to big economic growth story that the country is looking for through the demographic dividend of being home to the world’s youngest population. The country will stand no chance under circumstances of an immeasurable harm inflicted by drug addiction.

Punjab, the “bread basket” of India has emerged as a final destination for illicit drugs. The bulk of the world’s heroin comes from Afghanistan and its main route into India is through Punjab via Pakistan. As a result, the biggest dilemma  the confronts Punjab today is not jobs, corruption or the issues related to agriculture production – it is the drugs epidemic that is sweeping the state. Day by day the

scourge is taking alarming dimensions that have shaken the social fabric of the state.  Prevention of this epidemic should be a priority  of the Punjabi community.

The first step in this directions needs to be spread of the word about the consequences of substance abuse. The information provided is most effective when it is followed up with continued support. By sharing this knowledge with those closest to you, you might be able to prevent them from drug abuse.

On the practical sided, before diving into how to prevent drug addiction, we must know what drives people towards drugs. There are invariably different reasons why a young adult gets involved in substance abuse. Shared below are a few basic reasons that cause young adults to do drugs

To fit in the group

Peer pressure is powerful and is a contributing factor to some of the experiences that youngsters participate in, including drugs. Young people take drugs because they want to be accepted by friends or peers who are doing drugs.  It is a vicious cycle in which no one likes to be left out. Youngsters indulge under the influence of peer pressure despite not being able to justify their own acts in the eyes of their elders and society at large.

Young people take drugs to boost their confidence and self-esteem, they wish to compensate for the feelings of inadequacy towards themselves or the world which is very natural in the teens. If the sensitive phase is crossed over then the danger subsides

When youngsters are unhappy and can’t find an outlet for their frustration or a trusted confidant, they may turn to drug abuse for solace. Drugs temporarily take the mind away from what they perceive to be massive, life changing problems but which are, in fact, quite mundane. When the effect wears off the so-called problem is still there. A reality check through constant interaction with family to includes elder cousins etc can be helpful.

In the modern “everything at the click of a button era,” young adults  are constantly in search of instant gratification. They have little patience to wait or delay access to their “treats”. The “right now” impulse is what makes drugs and alcohol so appealing as shortcuts to happiness.

Young people often want to experiment; they go for experiences that they think are thrilling  just to portray a cool image in front of others. Many teens begin experimenting with drugs and alcohol out of curiosity and want to know what it feels like.

Youngsters  have the delusion that they are invincible. Their egocentric way of thinking makes them believe that nothing bad can happen to them even if they behave in risky behaviour.

“Prevention is better than cure” might sound like a cliché but it is nevertheless true. The most logical way to control  drug abuse is prevention. Parents have a significant role in preventing drug use among young children. Few parents realise that they may inadvertently contribute to the drug use of their children.

Parent’s attitude and views on drug use and alcohol figure heavily in the development of similar ideas in the mind of the child. No parent is infallible, and when it comes to the your child, no risk is worth taking.

There is no one-size-fits-all methodology to prevent substance use, but these principles may be helpful.

If you want your dear one to get rid of this menace, first acknowledge and validate their suffering and their insecurities. Connect with them, place yourself in their shoes, be compassionate. Most importantly, do not allow fear of social ostracism stop you from taking medical help.

Good communication with your children

Parents should have open channels of communication for thoughts and opinions. Ask your teen’s views and opinions, avoid too many lectures but without compromising on the need to tell them what is good and what is not good. Cultivate in the children a habit to listen carefully to what is being told to them. Talk openly about drugs and other such sensitive subjects.

Encouraging your child can build confidence and a strong sense of self. Let your child make decisions, give him unconditional support. Praise him for making safe choices, advise him where he goes wrong. A strong bond between will help your teen and yourself to connect on difficult issues like drugs.

“You’re only as good as the company you keep,” is an old saying and a reality. Keep a tacit tab to ensure that your child meets only the right kind of people

Young adults start using drugs just to “fit in” the group. It is significantly necessary to make them learn core life skill and the power of saying “No.” prepare them to respond to difficult situations of peer pressure.

Involve youngsters in creative work and challenging activities. Ask them to at least exercise for 30 minutes. Exercising  decreases stress, reduces depression and tension, improves sleep, and uplifts the mood.

Explain your family rules and be consistent with the boundaries you have set. Tell your child clearly and firmly to leave a party where drug use occurs. Tell him/ her also about the consequences of not abiding by the rules. If your teen breaks the rules, consistently enforce consequences. Parents should show zero tolerance for drugs use.

Keeping your child away from substance abuse is certainly an uphill task that need constant vigilance, it does not serve any purpose to later wonder as to why this happened in your family that has no such history. It can happen to any family in today’s world. so stay vigilant.

Fighting drug menace is a combined effort of parents, teachers, elders, role model society leaders, religious teachers etc. However the main responsibility is that of the state that should not allow entry of drugs at all and also run the information campaigns against drugs. Sadly, in Punjab, despite vows by the government to curb the drug menace it continues unabated. Obviously the efforts being put in are not enough.  With the number of active substance users expanding exponentially in Punjab, it is more important than ever to begin working to address this issue through improved, pre-emptive measures.