Balochistan, the most restive province of Pakistan, has for long remained in the grip of violence. Reports of atrocities being committed on innocent civilians by the Pakistan Army and its sponsored terrorists are received frequently, despite an attempt to keep them under wraps. The root of the problem lies in the fact that the people of Balochistan have never accepted their forcible merger as a province of Pakistan. The  beleaguered nation has been fighting for independence for many decades now.

On 29 November, 2020, Dr Liaquat Sani , Chairman of the Brahvi Department of Balochistan University, left Quetta on an official duty to Khuzdar along with two other professors.  Unidentified armed men intercepted their car in Mastung and took them away at gunpoint. The two other professors, Prof. Shabbir Shahwani and Prof. Nizam Shahwani were released soon after but Dr. Sani remained missing for some more days. He was let off by his abductors after about five days.

Activists within and outside of Balochistan termed the disappearance and a part of the “enforced abduction” policy of the Pakistan Army. It is being said that he was released only because of the massive protests by the students and faculty of Balochistan University and international disgust that the incident generated. The pain that the situation caused to the people is well expressed by a tweet by a Baloch student saying, “The policies regarding #BalochMissingPersons and #EnforcedDisappearances of any #Baloch are still continued whether he belongs to any field of life in #Balochistan. Raise your voice to end this inhuman act and #ReleaseProfessorLiaqatSunny.” 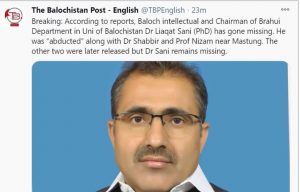 This incident has been followed by another report of nine people including women from Gichk in district Panjgur being abducted. Among these is an elderly lady named Bibi Maryam and her two grandsons. They were removed from the bus that was carrying them and simply taken away. They have now joined the long list of “missing persons from Balochistan.” The remaining six persons were also picked up in similar mysterious circumstances and for no tangible reason.

Balochistan has a long history of enforced abductions leading to mysterious disappearances. Normally those picked up were social activists, intellectuals or those looked upon as opposing the Pakistan establishment. However, recent cases like the one concerning abduction of nine people from Gichk show that the abduction policy has attained an indiscriminate signature, every Baloch faces danger of being picked up with ease. The reason behind this could be the need to spread terror among the common people to keep them subjugated; it could also be a result of monetary gains through the organ transplant business or a consequence of blood feuds. It is a known fact that the Pakistan Army has, for long, supported criminals for creation of what the locals call “death squads.” An overwhelming view is that the entire exercise has a political connotation.

Relatives of people who have disappeared have been gathering outside the Press Club, Quetta daily for more than a decade now. The daily sit-in protest began on June 28, 2009, after a doctor, Deen Muhammad, was abducted by unknown men. Muhammad’s two daughters are regular members at the sit-in. The protestors only wish to know about the situation of their close family members – whether they are still alive and in custody or have been done away with.

It is notable here that the Balochistan National Party (BNP) joined the ruling Pakistan Tehreek -e-Insaf (PTI) party of Prime Minister Imran Khan on the express understanding that the federal government would take affirmative action to locate the more than 5000 people listed as missing in Balochistan. Since no action has been taken by the Imran Khan Government, the BNP has quit the coalition. “If you cannot recover people, at least stop disappearing more people,” said Akhtar Mengal, president of the BNP. 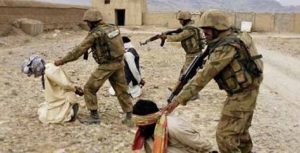 Atrocity by Pakistan Army in Balochistan

In her new book ‘Balochistan: Bruised, Battered and Bloodied’, Francesca Marino, an Italian journalist, has termed the current insurrection in Balochistan is the most complex and bloody since the forced annexation of the region by Pakistan. She considers it to be the outcome of the “brutal, repressive policies and strategies” of former Pakistan President Pervez Musharraf. The most abhorrent form of brutality is the enforced abductions and disappearances.

Francesca Marino further states that the Baloch people have long been trying to draw international attention to what is happening to them and their homeland and the book is another attempt to do so. “For years now, the world, to its shame, has silently ignored the ethnic and cultural genocide carried out in the region,” she says.

The struggle for rights within Balochistan has taken the shape of an open rebellion and a demand for independence. The Baloch leaders look upon the policy of enforced abduction followed by rape and murder as a form of “collective punishment” aimed at crushing the freedom movement by breaking their will. Many have lost their lives, honour and property in an environment of deplorable violations of human rights. Leaders and activists, including Mir Suleman Dawood Jan, the 35th Khan of Kalat, are living in self imposed exile and fighting in international forums for the rights of their oppressed people.

The Baloch leadership in exile is consistently highlighting the plight of their people across the world and especially in forums associated with the United Nations. Pakistan needs to be compelled by the international community to stop the systematic and organised violence that is specifically targeting women and children through enforced abductions. India needs to take a lead in this regard. Pakistan also needs to be stopped from tinkering with the culture, identity and way of life of the Baloch people. Once atrocity is stopped then the issue of the constitutional rights of the Baloch people can be arbitrated in accordance with the historical realities that govern the region. The time to act is now, before it is too late.

(Hardip Bedi is a senior journalist and geostrategic analyst)