You are here: Home / Religious Studies / Gur Gaddi: Anointment of Guru Angad Dev as second master of the Sikhs
Share 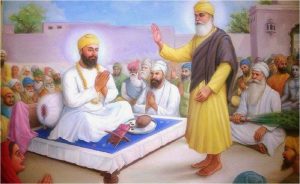 In a ceremony held at Kartarpur in the presence of a huge congregation of Sikhs, Guru Nanak seated Bhai Lehna on his throne, put five paise and a coconut in front of him and bowed before him. He then called upon Bhai Buddha to put a Tilak (mark of forehead) on the next Guru and directed his followers to obey and serve him.

Guru Angad Dev Ji was born on March, 31, 1504 to Pheru Mal and Mata Ramo Ji at Matte-di-Sarai (Sarai Naga) near Muktsar. His family was of Trehan Khatri (Traders) community. He was named Lehna by his parents. At an early age and under influence of his mother he became a disciple of Goddess Durga and as he grew older he became a priest in a Durga Temple. He was married to Mata Khivi Ji in January 1520. Mata Khivi Ji was also from the Khatri clan and belonging to a place called Sanghar in modern day Sindh, Pakistan. The couple had had two sons, Bhai Dasu and Bhai Datu and two daughters,Bibi Amro and Bibi Anokha.

Bhai Lehna, after becoming disciple of  Guru Nanak Dev Ji, displayed deep and loyal service to his Guru for about six to seven years in Kartarpur. Even though his devotion to Guru Nanak was very intense, the Guru subjected him to a number of tests to prove that he was the right choice for this exalted position of leadership and responsibility. Three significant tests are being mentioned here.

On the day Bhai Lehna returned to Kartarpur, he was wearing silk clothes and found Guru Nanak Dev Ji standing in the field beside three bales of hay that needed to be carried home to feed the cattle. The bales were wet and muddy from rains and the peasants did not want to carry them. Guru Nanak Dev Ji then asked his sons to carry them, but they too refused. Bhai Lehna , without a moment’s hesitation, picked up all three dirty bales and carried them home. His silk clothes were covered with dirt and mud and Mata Sulakhani, the wife of Guru Nanak Dev J, was horrified to see a guest in that condition. Guru Nanak then told her, “The load has been carried by the one who was fit to carry it.” Furthermore, he told her that it was not dirt on his clothes, but saffron. Sure enough, when she looked again, that is what she saw. 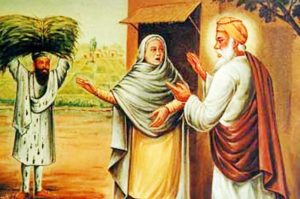 The second test took place during winter rains when one of the walls of Guru Nanak’s house fell down. He said that he wanted it rebuilt immediately, that very night. His sons asked, “Why not wait until the next morning when it can be easily repaired by the masons?”  Bhai Lehna, however, volunteered to do the job immediately. Just as it was finished, all smooth and mortared, Guru Nanak Dev Ji passed by and said, “It’s all uneven.” Without hesitation, Lehna tore down what he had painstakingly built, and started all over again. Once more when it was done, Guru Nanak Dev Ji looked at it and said he was not satisfied with the work. Without complaint, Bhai Lehna started from scratch. Guru Nanak Dev Ji’s sons watched all this, and told Bhai Lehna to desist from obeying what looked to be unreasonable orders from their father. Bhai Lehna ignored them and continued obeying the wishes of his master. Finally, after many attempts, the job was done and it met with the Guru’s approval.

In a third instance, Guru Nanak Dev Ji was out walking with his sons and a group of Sikhs and they came upon a platform on which there seemed to be a corpse covered with a sheet. Guru Nanak Dev Ji asked his disciples to eat it. Everyone was shocked by this order. Bhai Lehna however asked of his Guru, “at which end should I begin, master?” When the sheet was pulled back, a food spread was revealed on the table. Before eating himself, Bhai Lehna offered food first to his Guru and then to the others, saying that he would eat whatever was left over. This principle of first sharing with others is known in Sikh religion as Vand ke Chakna (sharing food with others). Thus Guru Nanak tested his disciple for the core traits of obedience and ability to surrender.

Our Gurus set an ideal example of competence being the only criterion for succession. A test or examination taken by a Guru may be hard but it takes the disciple to a higher level and makes him more capable and competent, Faith and devotion to the Guru and selfless Seva (service) is the key to any success.