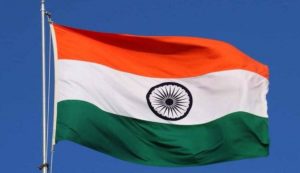 “Our Flag does not fly because the wind blows it; it flies with the last breath of every soldier who died defending it.”

Har Ghar Tiranga’ is a campaign under the aegis of Azadi Ka Amrit Mahotsav to encourage people to bring home the Tiranga (the Tricolour) and to hoist thenational flagto mark the 75th year of India’s independence. Our relationship with the flag has always been more formal and institutional than personal. Bringing the flag home collectively as a nation in the 75th year of independence thus becomes symbolic of not only a personal connection to the Tiranga but also an embodiment of our commitment to nation-building. The idea behind the initiative is to invoke the feeling of patriotism in the hearts of the people and to promote awareness about the Indian National Flag.

The last two years have been a very trying for India. For the first time in around half a century, we got drawn into to a conflict with Chinese Army in the Ladakh, that is yet not over. The country went through an economic downturn caused by pandemic and faced several upheavals and agitations. And all this happened in the shadow of covid-19, wherein millions of people lost their lives causing trauma and sadness to millions more. Along with the world, India is also facing the hardships and price rise caused by the Russia Ukraine war. The country has been resilient to battle the pandemic and the economic difficulties resolutely, with grit and perseverance.

It is thus, a good moment to rally around the National flag on the 75thyear of independence. Har Ghar Tiranga should prove to be therapeutic and an apt moment and mood to evoke nationalistic pride and patriotic fervour.

Sports teams carry their National flags at the head of the contingents in opening and closing parades of the events, whether it is Olympics or any other international meet, and the winners proudly carry them to the podium to receive medals.

World leaders display their National flags in the background when they hold meetings with other leaders, even if the meeting in held online.

There is something about a flag that motivates. It raises the Josh to the next level. Flag symbolises conquest.That is why soldiers carried pennants, ‘patakas’ and flags into battle. Armies planted their flags on the fort or the objective after victory. Last month we India celebrated the anniversary of Kargil Vijay Diwas. We all saw several pictures of soldiers planting the National Tricolour – The Tiranga – on the mountain peak that was captured. In 1999, during the Kargil war, when the news showed these images in real time, as they happened, besides informing the nation of the progress of the battle, it also evoked tremendous pride among the citizens in the soldiers and the nation. 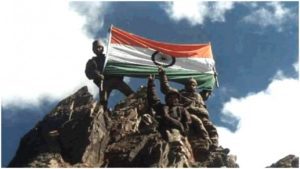 Yes, there has to be something about a flag. Every armed force has its own flag. Political parties have it, even corporate world has it. In the US riots of January this year, the rioters carried flags when they stormed the Capitol. Even the rioters in Delhi on this republic day attempted to plant a religious flag at the Red Fort.

Here is another interesting military fact about flags in the army. ‘Colours’ or “Standards’ are regimental flags awarded by the President to battalions and regiments to acknowledge the sacrifices made by them in their service to the nation. The colours are accorded utmost respect by all soldiers. When regimental colours are brought on the parade ground, all present stand and salute the colours. Even the Chief Guest salutes the colours. Not doing so would be sacrilegious. Isn’t that almost like worship?

When a soldier fights the enemy on the borders risking his life, he fights for ‘Naam, Namak, Nishan’ or the name and the glory of his unit, the flag of his regiment and the National Flag. The Tiranga motivates him to risk his life for the country. Those who lay down their lives in combat, their mortal remains are brought home wrapped in the national flag. It is the highest honour that can be accorded to someone. Before performing the last rites, the Tricolour is removed and handed over to the family, to honour his supreme sacrifice for the nation.

When we salute the Tiranga, the National Tricolour, and sing the national anthem at any function event or even in a cinema hall, it gives me goose bumps – such is the pride and nationalistic feelings it evokes. The Tiranga evokes this pride in all Indians. It binds all Indians, whether living in India or anywhere else in the world.

Recent times have witnessed anger spilling on the streets too frequently, sometimes even on caste and community lines. Besides invoking the feeling of patriotism in the hearts of the people, let us also use the Tricolour to promote amity and brotherhood among all Indians. Let us not only bring the Tricolour home, let us take it to heart. Let us graduate from Har Ghar Tiranga to Har Dil Trianga.