You are here: Home / Areas of Study / Governance & Politics / Inclusion of Punjabi as official language in J&K merits consideration
Share 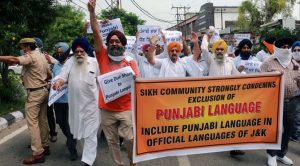 On 02, September, the Union Cabinet, at a meeting presided by Prime Minister Narendra Modi, approved a bill under which Kashmiri, Dogri and Hindi, apart from the existing Urdu and English, were identified to be the official languages in the Union Territory of Jammu and Kashmir. The decision was conveyed by Union Minister of Information and Broadcasting, Prakash Javadekar, with a clarification that the approval will be followed up with introduction of the, “Jammu and Kashmir Official Languages Bill, 2020,” in the Parliament of India during the upcoming monsoon session.

The princely state of Jammu and Kashmir was founded by Maharaja Gulab Singh of Jammu by establishing his rule over dozens of smaller principalities of different ethnic configurations.  The Kingdom, therefore, related to many indigenous languages and cultures. The linguistic  scenario of J&K, thus, remained especially intricate and complex.

In 1889, the then ruler of the state, Maharaja Pratap Singh, adopted Urdu as the official language of the Kingdom, replacing Persian which had enjoyed that status for more than three centuries. Post independence, the same was carried forward by Constituent Assembly of Jammu and Kashmir while adopting the state constitution. Under the sixth schedule of the J&K constitution, however,  Kashmiri, Dogri, Balti (Pali), Dardi, Punjabi, Pahari, Ladakhi and Gojri were incorporated as regional languages of the state.

The Union Government has, very rightly, taken the decision to increase the number of official languages in the newly reorganised Union Territory to meet the aspirations of a larger segment of the people. This was also a long pending demand, not being met due to the special status that Article 370 provided to the state.  This aspect has been explained most aptly by Dr. Jitender Singh. member of Parliament from Udhampur and Union Minister in the NDA II Government. “It is not only a fulfillment of a long-pending public demand of the region but also in keeping with the spirit of equality which was ushered in after August 5 last year,” he is reported to have said.

Soon after the Union Cabinet’s decision, different political and ethnic groups in J&K came up with a demand for the inclusion of Gojri, Pahari and Punjabi in the proposed Bill.

As per the 2011 Census, the Sikh community comprises 2.03% and Gujjar community 12% of the total population of Jammu and Kashmir. Punjabi, however, is not spoken by Sikhs alone. It is the preferred language of the people living along the border from Kathua  to Poonch, especially so, of the West Pakistan refugees and members of the Valmiki Samaj. Both these and other deprived segments are in the process of getting domicile certificates and will be a part of the reorganised Union Territory that is expected to get the status of a state in due course. Their aspiration need to be considered at this stage itself. 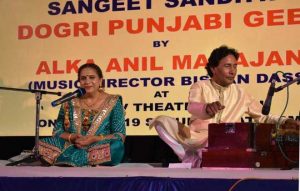 It is also important to understand that there is a lot of commonality between Punjabi, Dogri and Pahari spoken in the state. These are perceived to be sister languages since centuries and people now speak a hybrid of these languages. Even Gojri is very close to all these languages. The languages, therefore, need to be kept at an equal status to nurture the diverse, yet integrated cultural ethos of the region.

The demand for inclusion of Punjabi is extending from the plains of Jammu to the heights of Poonch. A deputation of All Sikh Gurdwara Management Committee has raised the issue with the  Advisor to Lt Governor, Shri KK Sharma.

According to media reports, Charanjeet Singh Khalsa, an active member of the Bharatiya Janata Party and former member of the J&K Legislative Council has also demanded  the inclusion of Punjabi along with other languages. Some Councilors of the Jammu Municipal Corporation have expressed anguish over the exclusion of Punjabi from the official languages of J&K. Many other Sikh organisations have held meetings and staged demonstrations with this demand as the central agenda.

While the decision to increase the number of official languages in the state has been hailed by the people there is a fair degree of agitation over the exclusion of some important languages like Punjabi and Gojri. The demand should not be considered to be one of Sikhs alone simply because they are in the forefront for making the claim; it will impact a sizeable portion of the population in the Union Territory.  There is a strong case in the popular demand for inclusion of Punjabi and a few other languages in the official charter. While agreeing that too many languages can cause confusion the vast ethnic and cultural diversity of the region which is also its pride needs to be considered with sensitivity.

(Jaibans Singh is a journalist and a columnist)