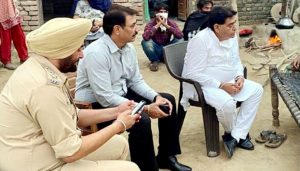 Police at the site of the Jalalpur Rape case

While Punjab remains continues to be preoccupied with what is now universally known as the Farm Bills agitation, the rape and murder in the state of a six year old girl has gone largely unnoticed. The agitation will ease down with time and it will be business as usual. What, however, will remain as particularly galling is the fact that the people of the state failed to even acknowledge the barbaric and deceitful burning of the six year old girl in Village Jalalpur, near Tanda. She was reportedly lured from her house by the alleged 20 year old rapist and then subjected to this terrible affliction. So immersed are we in our materialistic pursuits that we have not given even a passing thought to something that should have impacted our collective conscience and ethics.

The media has covered the brutal incident only fleetingly and the politicians have given to it only cursory attention. Punjab Chief Minister Amarinder Singh has responded with a terse twitter post saying, “Have directed the DGP to ensure proper investigation and have the Challan presented speedily. (I) call for fast trial and exemplary punishment to the guilty by the court.” Job done!! He has washed his hands off it and concentrated again on ways and means to further embarrass the BJP in the ongoing Farm Bill agitation. Is this all that the Chief Minister and ruling Congress party have to say to a migrant family that came to the state to work and is now left devastated? He could have at least called the affected family and recorded the video for PR purposes as he normally does.

The central leadership of Congress party that is ruling the state leaves no opportunity in running to sites of such incidents’ if they occur in BJP ruled states like Uttar Pradesh. A recent example is the hoarse cries emanating from Rahul and Priyanka Gandhi in “seeking justice” for the victim of the incident of rape in Hathras, Uttar Pradesh. There was no political card that the brother sister duo did not play. In this instance in Punjab, not a word has been heard from them, not even a directive to the chief minister to look into the unfortunate case personally.

The reason is so very obvious, the small child killed so cruelly and mercilessly is from Bihar and word going out about atrocities happening to Bihari migrants in a Congress ruled state could negatively impact prospects in the upcoming state assembly elections in Bihar. 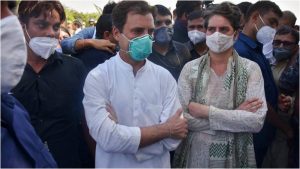 In a typical politically engineered police action, two suspects from the same village have been arrested. These are Surpreet Singh and his grandfather Surjit Singh in whose cattle shed the partially burnt body of the victim was found. The father of the boy has been allowed to escape even as the locals are demanding his immediate arrest but to no effect. The Government does not wish to add to the numbers unnecessarily, it seems. Undoubtedly, those arrested will be kept in police custody till the Bihar elections are over and then the case will linger on in Court.

The body of the rape and murder victim was cremated while the Police was busy attempting to put under wraps the anger of the people and their strong protests by denying their raising of slogans and demands of capital punishment being made. This is very obvious collusion for the sake of political expediency.

What is also being conveniently sidelined is the fact that this very region has seen two incident of horrendous crimes against women in the last two years plus. An eleven year old girl died due to rape in 2017 and another reported rape with making of a compromising video in 2018. It quite obvious that the Police has taken no action to ensure security of women in an area known to be thus crime prone; when viewed on this premise, responsibility for the latest lapse remains vested squarely upon the state police. The police is not acting since it has the complete patronage of the political authority that is simply not interested in such “petty issues.”

One has to acknowledge that such cases abound across India but the question that is touching the core is –when did Punjab become so insensitive to the life, pride and dignity of women and especially small girls? When did some grain procurement process gain importance over our sense of justice, especially in respect of those who come to our state to work for us and earn a living?

Speaking of the agitation per se, one wonders as to why there is so much hatred being spouted in a manner that is so very personal. The whole process has taken shape of a vindictive campaign. As a result the actual issues have go lost somewhere in the shrill rhetoric with no attempt being made towards resolution through debate.

Is the rape and murder of a six year old not reason enough to prick the conscience of any and every person in Punjab? The Congress party that is ruling in the state and more importantly the people of Punjab were expected to respond to the tragedy with a lot more sensitivity. In such horrendous and inhumane crimes, there has to be a uniform measure of condemnation and exhibition of solidarity with the family of the victim, regardless of the political affiliations involved.

One thing seems quite certain here is that the family being poor migrants is unlikely to get justice. They cannot afford to pursue the case and will probably leave Punjab carrying the pain in their heart.